Posted at 15:30h in Blog by Historic Boston Inc

From Edible Magazine, Shelby Larsson explores the Fowler Clark Farm at the height of the 2019 summer growing and harvest season. Read the article for the latest updates on the Urban Farming Institute’s work on the historic farm site. 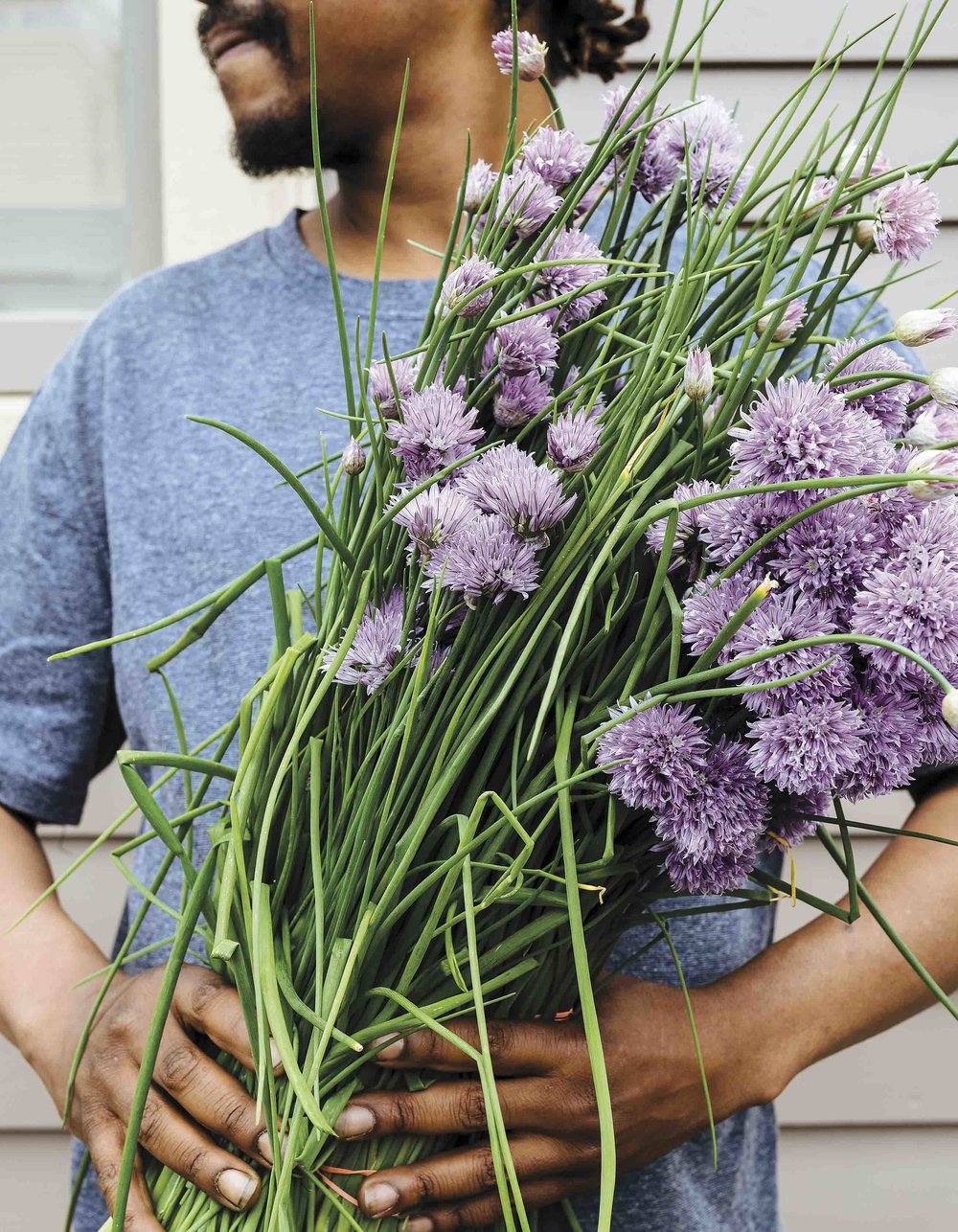 On a rare sunny morning this spring, a farmer from the Urban Farming Institute checks the lettuce at the Fowler Clark Epstein Farm in Mattapan. The delicate plants went into the cold earth the day before, and she confirms that they are looking good. Despite the cold, wet spring, the farmers don’t feel like they are behind. There’s a feeling of ease on the farm; they appear to have it all under control. And they do: Instead of relying on outside growers as in the past, the farmers have taken seeding and propagation in-house, literally. This year, with grow lamps and a lot of TLC, all plants were started in the basements on the property.

That quiet morning stood in stark contrast to the farm’s ribbon-cutting ceremony last spring, which attracted over 500 members of the community, elected officials, related nonprofit organizations and Boston Mayor Marty Walsh. There was good reason for all the excitement—for many, it had been hard to believe that this day would ever come.

What is now known as the Fowler Clark Epstein Farm is perched near the busy intersection of Norfolk and Morton Streets in the Boston neighborhood of Mattapan. In the somewhat confusing parlance of Boston neighborhood boundaries, Mattapan was once a village within the town of Dorchester, before it was annexed by the city of Boston in 1870. Largely agricultural at the time, the land was dotted by farms and orchards and widely known for its pears. According to early settlers’ accounts, it was a pretty great place to establish a farm. From a 1674 record made by John Josslyn, we learn that “six miles beyond Braintree lyeth Dorchester, a frontiere town pleasantly seated… beautified with fair orchards and gardens, having also plenty of cornland and store of cattle counted the greatest town heretofore in New England.” 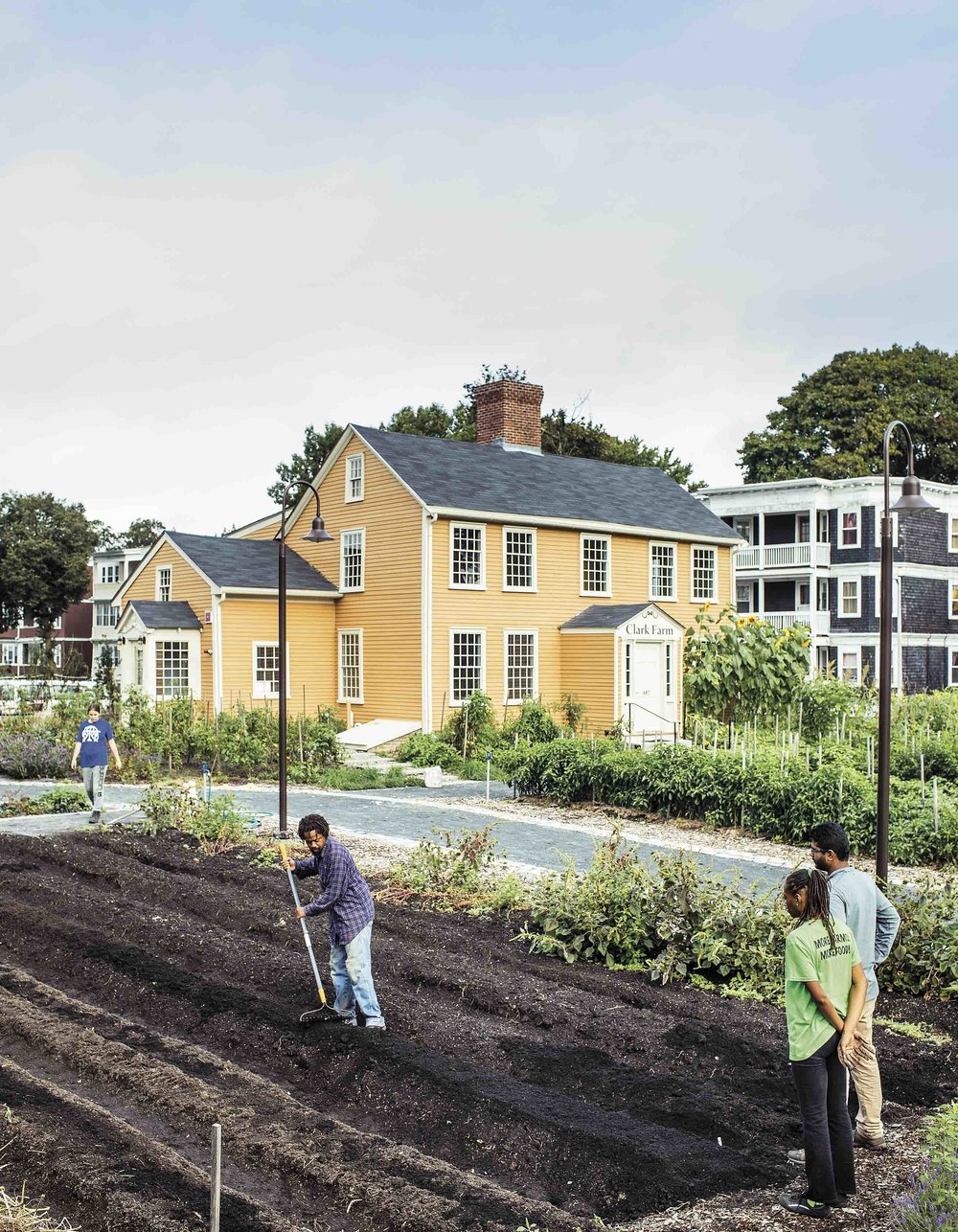 Built between 1786 and 1806 by local farmer Samuel Fowler, the farmhouse was once part of a 330-acre estate. Today, the house sits on a corner lot measuring less than an acre. When the Clarks bought the farm in the 1830s, the house stood on about 11 acres. As streetcar lines hastened development in Mattapan and Dorchester, the Clarks subdivided much of the land, turning their 11 acres into 61 lots in 1895.

The farmhouse and its 1860s barn remained intact, however, and in 1941 Jorge Epstein, a Blue Hill Avenue jeweler and architectural salvage dealer, purchased the property. His family incorporated unique architectural elements into the house and gardens over the years, creating an eclectic, quirky spot. After Epstein’s death in 1998, it proved increasingly tough to maintain, becoming overgrown and neglected, thick with vines and other people’s trash. But it retained its unique pastoral character. You could always tell that this place had been a farm.

Building pressure from developers forced concerned neighbors to take action, filing a petition to make the Fowler Clark Farm a Boston Landmark. It achieved that status in 2006, protecting it from demolition, but not from deterioration. The question remained: What would happen to this place?

After paying close attention to the farm for years, nonprofit Historic Boston Incorporated (HBI) purchased it in 2015, understanding the unique challenges ahead. Early in the process, there was some debate about the best use for the property, but once the HBI board visited the farm, the vision became clear. “With the buildings and the landscape, it truly felt like a rural farm in the middle of the city,” recalls HBI Executive Director Kathy Kottaridis. “The discussion quickly turned to making it a farm once again, and finding the right collaborator to make that happen.”

Enter the Urban Farming Institute (UFI), a nonprofit organization that trains residents from Boston neighborhoods (primarily in Roxbury, Dorchester and Mattapan) in small-scale urban farming, food systems and business planning basics. Working with HBI, The Trust for Public Land and the North Bennet Street School, UFI began the process of bringing the farm back to life.

UFI Executive Director Patricia Spence grew up nearby. She and her brother would ride their bikes by the place, pumping their legs faster as they passed. “It was a bit spooky,” she says. “There were trees everywhere, lots of debris, overgrowth. You could tell that it was a farm, but it was hard to see much more than that.” Bringing the idea to her board, she knew it was crazy, but that this kind of opportunity wouldn’t come along again any time soon. 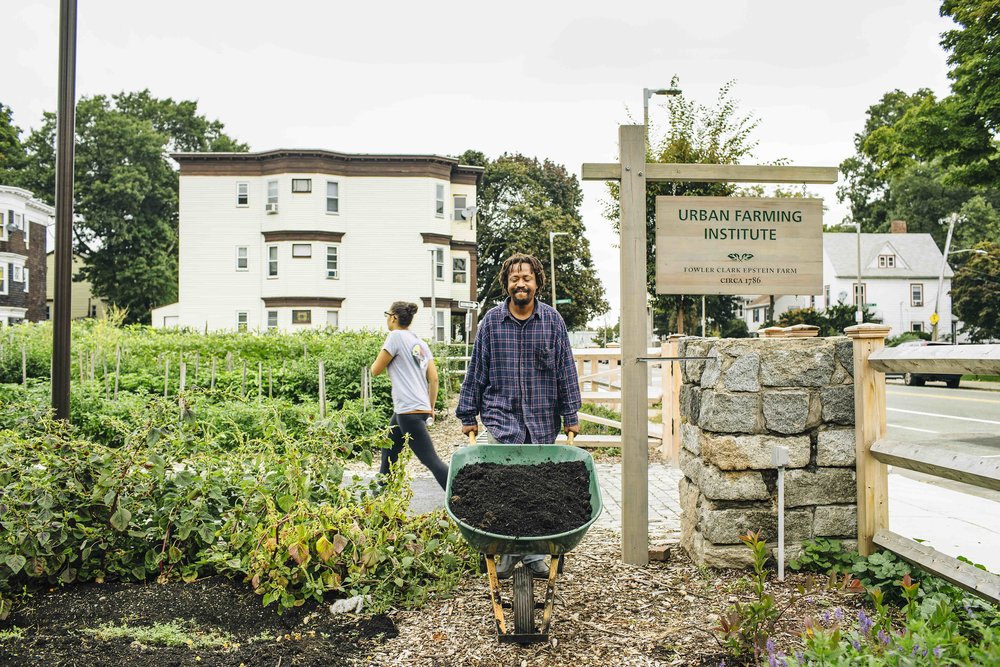 Plans moved ahead quickly. The barn now serves as headquarters for UFI, with offices and a demonstration kitchen and classroom on the first floor. The farmhouse was also restored, and is used as related office and meeting space. The site, now buzzing with activity, feels enormous in an otherwise dense urban setting. Triple-deckers and apartment blocks line Norfolk Street, making the farmhouse, barn and garden plots stand out. It’s a huge swath of land for an urban farm. “I remember just how big it is every time I get the shovel out,” jokes Farm Training Manager Bobby Walker.

Now that they’re settled in, UFI is focused on organizational goals, including reaching students from each of the 20 schools within the neighborhoods it serves. They host workshops about growing and eating good food, hold story hours and community events, train farmers young and old. They want to continue to grow and help change policy so that more abandoned or underused properties can become urban farms. “That’s a long list,” says Spence, laughing. “And it all has to happen on LAND. That’s the connection. You just need to get people here. Education happens when people start asking questions.”

For Spence, it goes even deeper than that. “Here, we grow people,” she likes to say. Walking around the property, that becomes clear. The farm is molded by the people who work there; by their strengths and their interests. In that way, the farm works almost like an incubator. Those who go through the training program get jobs working for the organization, or they are connected to kitchens, restaurants, bakeries or other farms. 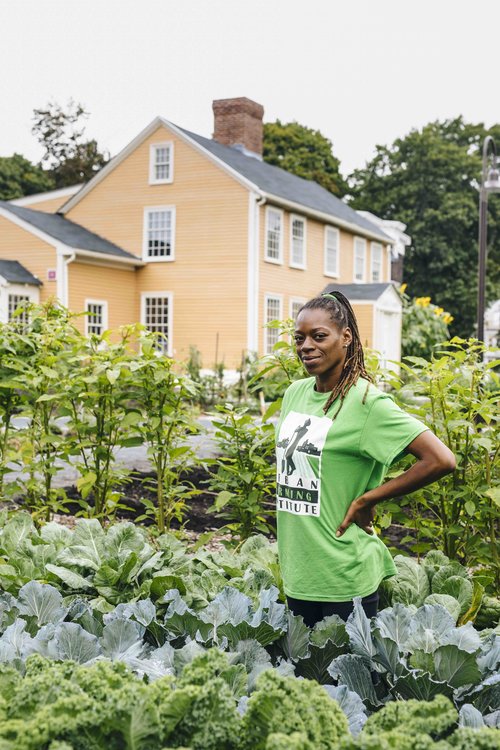 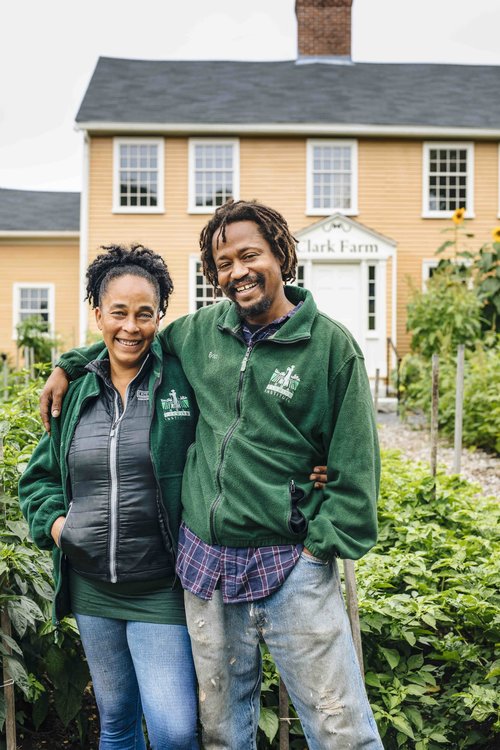 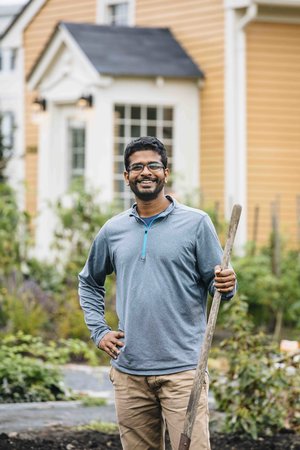 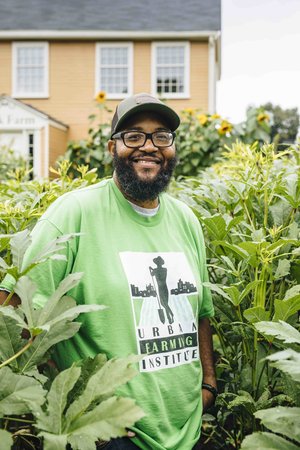 Tristram Keefe, the farm enterprise manager, is a cook and a forager with a deep interest in growing mushrooms, cultivating several varieties here. Sabrina Pilet-Jones, another UFI-trained farmer, is drawn to growing flowers, and wants to better understand their value for cross pollination and for their edible and medicinal use. She’s in the right place: Everything grown here is either edible, medicinal or acts as a pollinator. Corn stalks line the perimeter, keeping the soil in place and decreasing runoff into the sidewalk. The property is edged with juniper, juneberries, blueberries, raspberries, yarrow and paw paw trees. Everything about this landscape is considered. 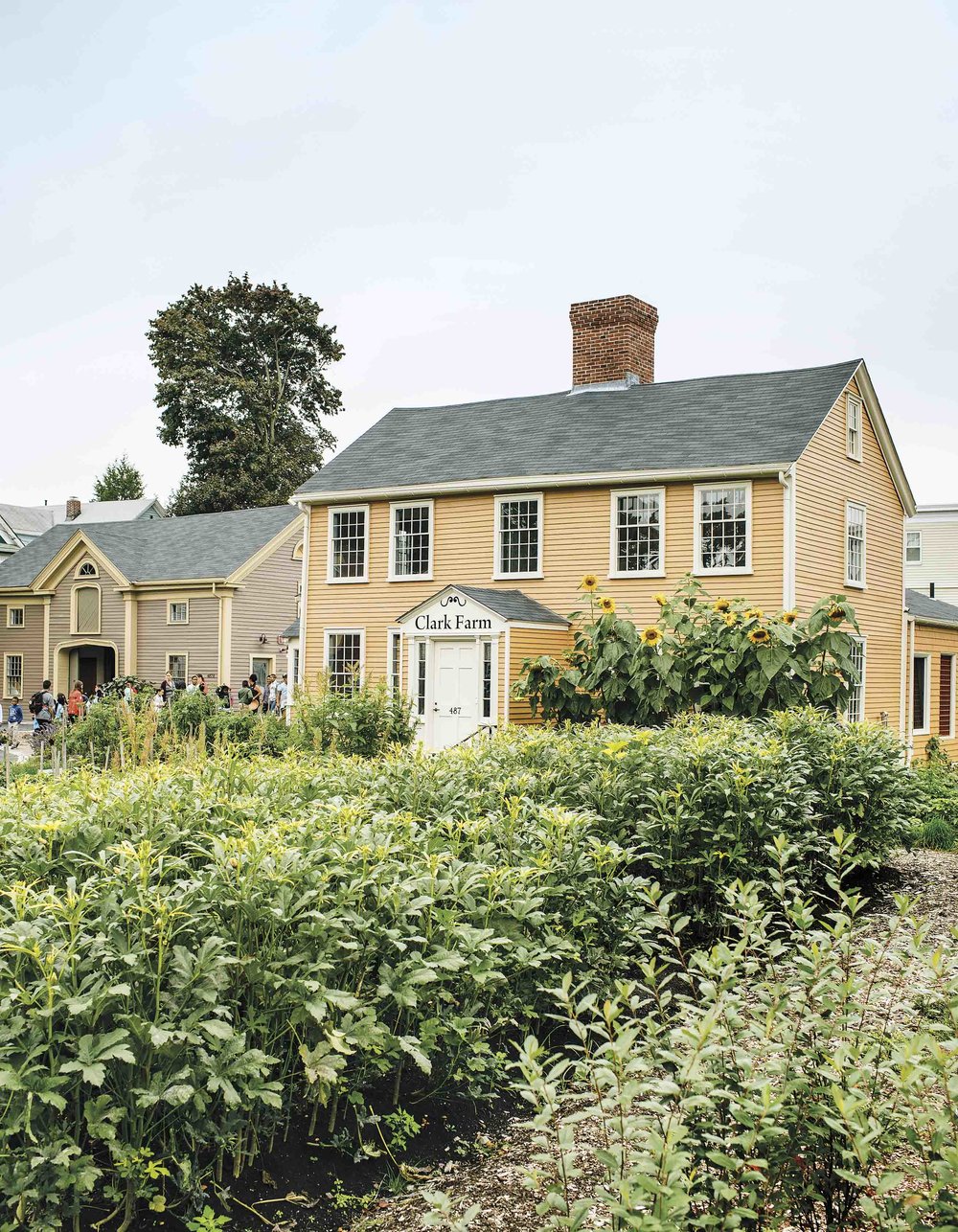 UFI is also known for growing somewhat unconventional crops for a New England farm. Because they are growing fruits and vegetables for the surrounding community first, the farmers take into consideration the variety of cultures and cuisines represented in their neighborhood: Caribbean, Cape Verdean, Southeast Asian and more. Collards, kale, callaloo, kusa squash and several varieties of spicy peppers (Scotch bonnet and the infamous ghost pepper, to name a few) are all grown here. Over the years, other farmers warned them to stay away from high-maintenance okra, but the UFI farmers paid attention to their neighbors’ requests. Today they grow six different varieties of okra and sell out each week. 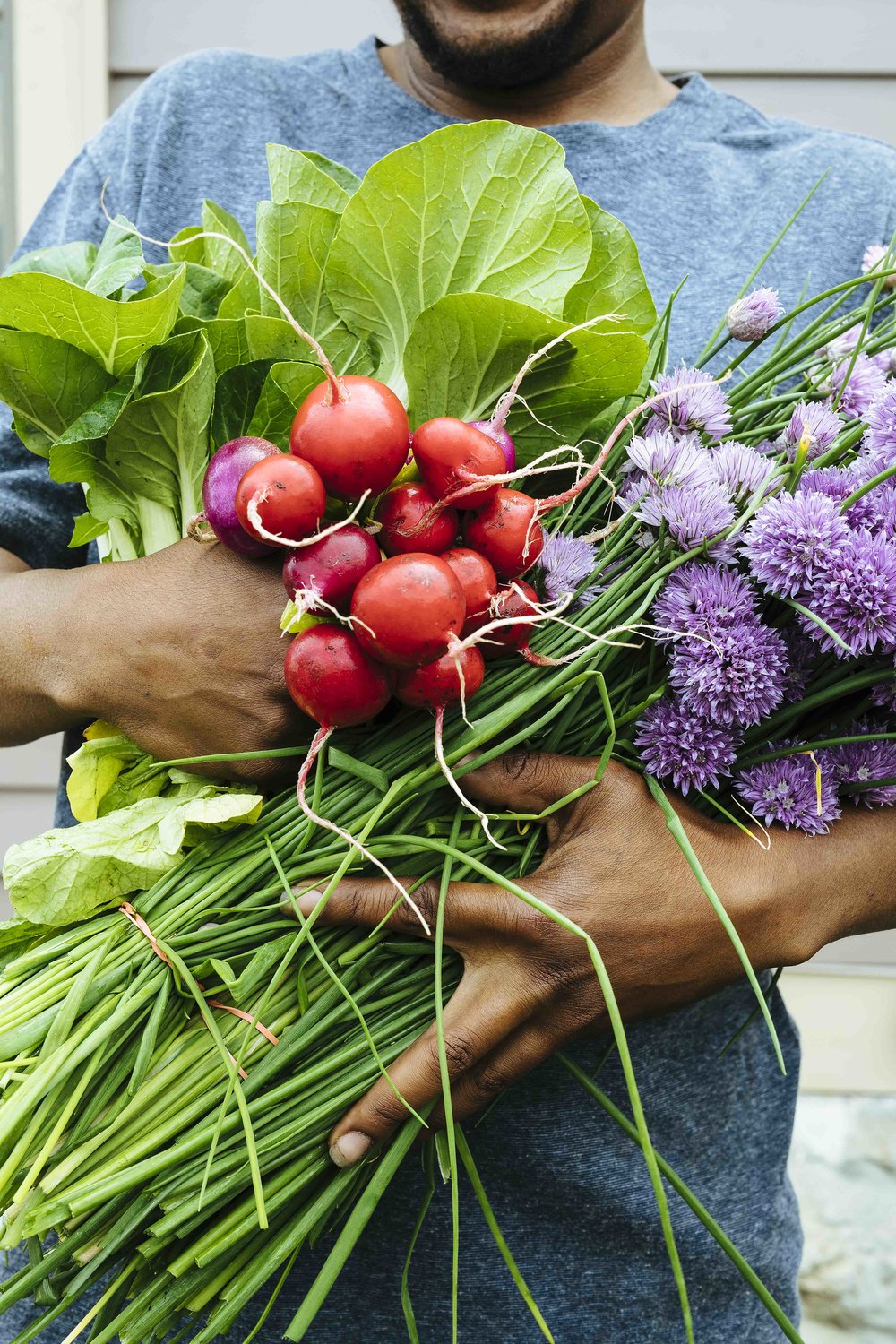 For their restaurant partners, UFI provides truly local food and an opportunity to connect directly to the people growing it. Area Four, an early and consistent supporter of UFI, uses the farm’s salad mix in their popular “City Growers” salad. Tanám, a new Filipino-American restaurant in Somerville’s Bow Market, approached UFI to grow specific peppers to use in their distinctive cuisine. And Irene Li, of Mei Mei, is on a text message basis with the farmers, communicating frequently about what they have on hand.

“We try to be really flexible. It’s more of an ‘ask not what your farmer can do for you, but what can you do for your farmer?’ mentality.”

To further underscore the relationship, Mei Mei also provides a classroom experience for UFI trainees, who visit to better understand how a restaurant kitchen works and how chefs source and purchase food.

I attended the ribbon-cutting ceremony in the spring of 2018 and wanted to share the story of this brand-new historic farm. But if I had managed to grab a UFI farmer that evening, I might have seen a bit of panic in their eyes. In all things construction, a whole list of unknowns makes it difficult to plan ahead. Since smart farmers only make growing plans for land that they control, UFI could only prepare their other sites around Roxbury and Dorchester. But finally, in early spring 2018 the certificate of occupancy arrived, construction wrapped and their lease began. Soil was delivered and it was time to plant. Everything had come together, and now the farmers had to get growing. 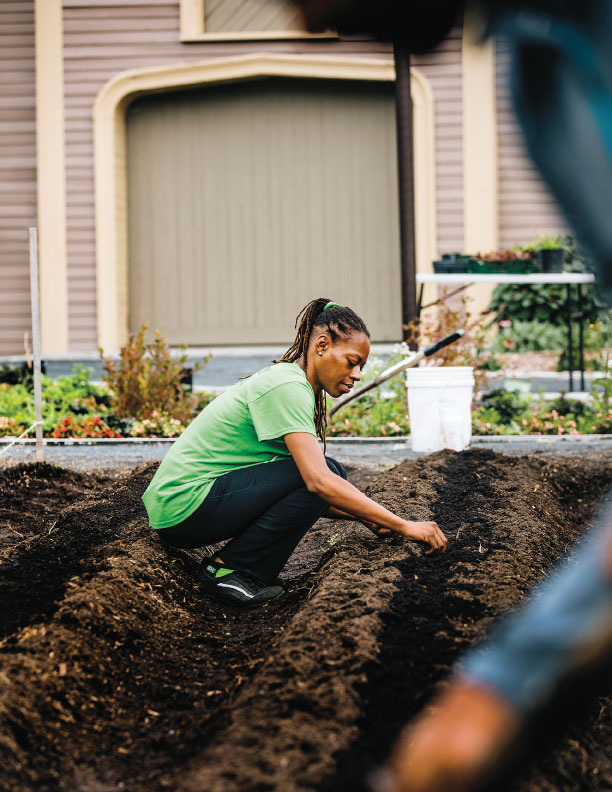 With all that, plus running six other farming sites, it’s no surprise that the spring of 2018 felt like a blur. “Even after we moved in, it didn’t feel real, it didn’t feel like it was actually happening,” Keefe recalls. But now in 2019 the farmers feel like they are hitting their stride. “The soil is better, everything is more mature. Last year we were learning about the land, and dealing with how raw it was. The trees were bare-root. Nothing looked particularly abundant. This season feels so different.”

Another difference this season? The renewed focus on making each Friday afternoon farm stand feel like a big party. Last year, the community’s response to the farm stand exceeded the organization’s highest hopes. They were struck by the way people gathered by the barn, sharing recipes, swapping gardening tips and catching up with neighbors. “We are all cooks first,” explains operations manager Nataka Crayton. “That’s how each of us really got started growing food and how we connect with the land.” It’s fitting, then, that the weekly farm stand should be a big celebration of the good food grown on this land once again. 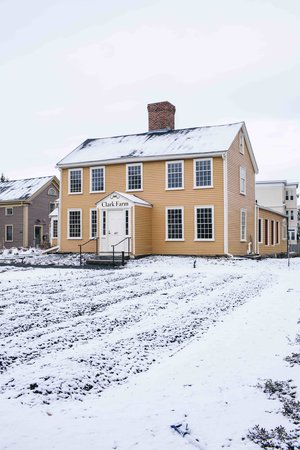 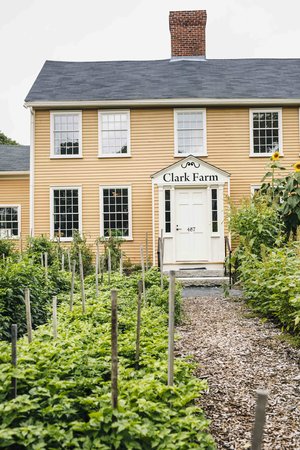