A New Home for a Historic Roxbury Mural

Posted at 09:58h in Blog by HBI Administrator 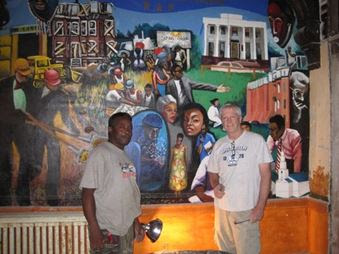 Anyone who has stepped inside the Alvah Kittredge House over the past 30 years will likely recall the colorful mural hanging directly across from the front door.  Entitled ?Building a Model Black Community,?the mural has graced the front hall of the house since it was owned by the Roxbury Action Program, from the 1970s to the early 1990s.  HBI wanted to make sure the mural was preserved as an example of the art that typified the social activism of its time, so we contacted Barry Gaither, Director of the Museum of the National Center of Afro-American Artists, Inc.. Not only was the Museum interested in receiving the mural for its collection, but Barry was able to attribute the work with some certainty to artist James Reuben Reed, an artist whose work the Museum collects.
Barry Gaither describes the scenes depicted in the RAP mural:
In its background, Reed contrasts a dilapidated old brick townhouse with the projected renovated Kittredge House.  A survival garden lies between the two.  In the foreground, builders are at work, and planners are busy charting the future.  Just behind them, residents are playing chess and exploring the world via computers.  Several images in the work evoke local activists including Doris Bunte, Joseph Warren, and Mel King. 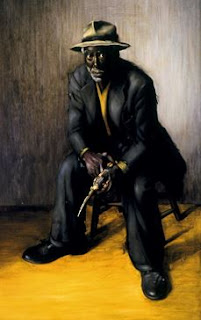 The painter James Reuben Reed was born in Kansas City, Missouri to African parents in 1920.  Shortly after his father and brother were slain in a racist conflict, his mother died.  As an orphan he moved to Hartford, CT, and studied painting and decorating at the Connecticut State Trade School.  In the 1940s, Reed studied portraiture and still life painting at the Scott Carbee School of Art in Boston, eventually receiving an Atlanta University purchase prize for his work ?Depressed,? a powerful painting of an old man whittling, pictured here.
Reed was also a cofounder of both the Boston Negro Artists Association (now the Boston African American Artists Association), and the African American Master Artists in Residence Program at Northeastern University.  Over the last two decades of his life, he executed several murals including ?Build Senior Power? and ?Martin Luther King, Jr: a Drum Major for Justice.?  He also presented in one-person exhibitions and completed a series of portraits of black women of accomplishment, of which 40 were donated by the artist to the NCAAA.   After earning a Masters Degree from the Harvard Graduate School of Education, Reed, who had also been a Community Fellow at MIT, became an Assistant Professor and Assistant Dean in the College of Criminal Justice at Northeastern University.
HBI is grateful to Bill Raymer and Paul Watkins of Restoration Resources for volunteering to remove the mural from the wall.  Thankfully, Bill and Paul were able to remove the piece without causing any damage.