A New View Down Washington Street

Posted at 15:11h in Blog by HBI Administrator 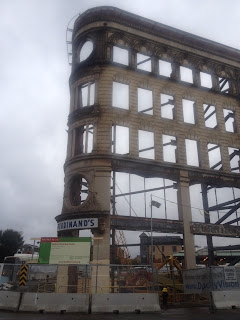 For nearly 10 years now, the blighted and boarded-up Ferdinand Building (1895) and the hole in the ground behind it were Dudley Square?s equivalent to downtown Boston?s Filenes site. Many plans have repeatedly raised and dashed this community?s hope that a long-vacant building in the very heart of Dudley Square would have a new use, new jobs and a new profile.  Well, let there be no doubt:  change is here.

The cranes have arrived, the site cordoned off, and construction is well underway on the mixed use office/retail structure that will be home to the Boston School Department and several first-floor retail spaces. For preservationists, there is great delight and some chagrin (more the former than the latter, for sure). The industry?s debate over fa?adectomies — where the historic facades of buildings are preserved but all other floor and structures removed for new construction ? comes into play here.  The city?s project is subsuming the entire portion of this block north of Dudley Station, a footprint that takes in the Landmark Ferdinand building at the Corner of Warren and Washington Streets, and two 19th century historic buildings on Washington Street. Today, these three buildings have been demolished except for their facades which will be incorporated into the new building.  This may not be ideal, but the forthcoming complex will be the most substantial investment in Dudley Square in the last 40 years ? visually and economically.  The new building, designed by Sasaki and Associates with Mecanoo Architects of the Netherlands, mixes contemporary design with historic details.  In size, this project will bring new density and a new profile to Warren Street and Dudley Station. And it will bring 500 plus people each day to Dudley Square who will use retail storefronts, and new restaurants and will be a real catalyst for broader district activity. The City is to be commended for real leadership and risk on this project ? in conception and execution.
But these days, the construction has created an awesome sight down Washington Street: the historic Ferdinand building ?stark against the sky with no windows, doors etc.  appears like a classical ruin against the sky. Combined with the construction activities, this is good energy for Dudley Square and positive things to come.
The project will be completed in early 2015.  HBI?s offices look out toward Ferdinand, so we will occasionally update readers on activity there. You can see project renderings here. And to follow construction, bookmark this live web cam.