September 24, 2014 A Retrospective Look at the Preservation of the Kittredge House in Roxbury

Posted at 07:59h in Blog by HBI Administrator

Matthew Kiefer, President of HBI’s Board of Directors and a partner at Goulston and Storrs, offers a retrospective look at the Alvah Kittredge House’s path to preservation and the HBI model that re-activated the historic building, completed in August. (Photos by Craig Bailey and Greg Premru)

At HBI, we often say that we?re the developer of last resort; we take on the historic resources others won?t touch.  We sometimes say that we won?t do a project unless people tell us we?re crazy to even try.  One of our most challenging tasks as a board is to be bold enough to serve our mission without putting HBI?s future stability in jeopardy.
We recently put this to the test yet again with the Alvah Kittredge House, which we re-dedicated on August 11th.  We took the deepest breath we?ve ever taken before embarking on this rescue mission; even people who know what we do cautioned us away.  In retrospect, I?m glad we didn?t listen. 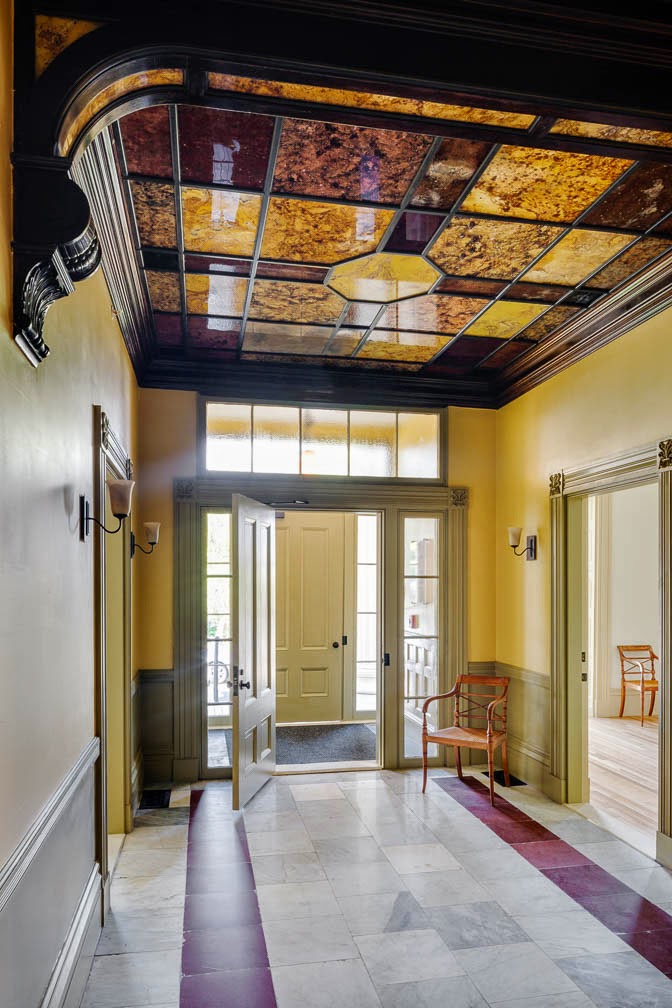 This magnificent Greek Revival mansion is the remnant of a country estate built in 1836, when Roxbury was still a country town.  Alvah Kittredge, a successful furniture maker, deacon in his church and Roxbury selectman, built his house in the classical style then popular in a still-young republic as a symbol of the ancient lineage of self-government.

The identity of Kittredge?s architect is unknown ? maybe he consulted pattern books and designed it himself.  In 1866, he sold the house to Nathaniel Bradlee, a prominent architect responsible for many buildings in the emerging South End, who ?Victorianized? the grand entry hall with carved modillion brackets supporting striking glass ceiling panels painted to simulate marble.


By the end of the 19th century, as Roxbury was urbanizing, a later owner removed the house?s side wing, rotated the house to face the newly laid out Linwood Street, and sold the remaining land for development.  By the second half of the 20th century, the house had begun to devolve.  In 1971, after numerous changes in ownership, it was transferred by the Boston Redevelopment Authority to the Roxbury Action Program for its headquarters.  This was the urban renewal era, an era of general urban decline.  RAP, founded in 1968 to revitalize Highland Park, has since developed and managed low and moderate income and elderly housing, and run a range of social, training and cultural programs.

Historic houses have particular stories to tell that enrich the lives of those around them, but they also (like people) require special attention as they age.  The house had already deteriorated when RAP acquired it and they were ultimately unable to raise the funds to restore it.  They eventually moved away and the house sat vacant for many years.

By 1980, Historic Boston had begun doing ?casebooks? to identify neglected historic resources like the Kittredge House across Boston?s neighborhoods that were candidates for our attention.  Along with the patient residents of Fort Hill, we waited 30 years for the right combination of public and private resources to converge so we could take it on.  By 2010, the house had become so compromised that we convinced its then-owner to let us erect scaffolding at our own expense to keep its Greek portico from collapsing into the street.

In 2012, we took our deep breath, acquired the house from the BRA, and began the project in earnest.  The Kittredge House restoration cost $3.8 million, including our own equity, historic tax credits, bank financing and, crucially, about $1.2 million in charitable support from public agencies, foundations and individual donors.

Some 300 supporters, friends and neighborhood residents congregated on Linwood Street on a lovely August evening for the re-dedication.  Glimpsing the freshly-painted house as I walked up the hill to the event, for a brief moment I feared it was an illusion ? a hologram cleverly projected onto the fa?ade that would get switched off once the crowd departed. 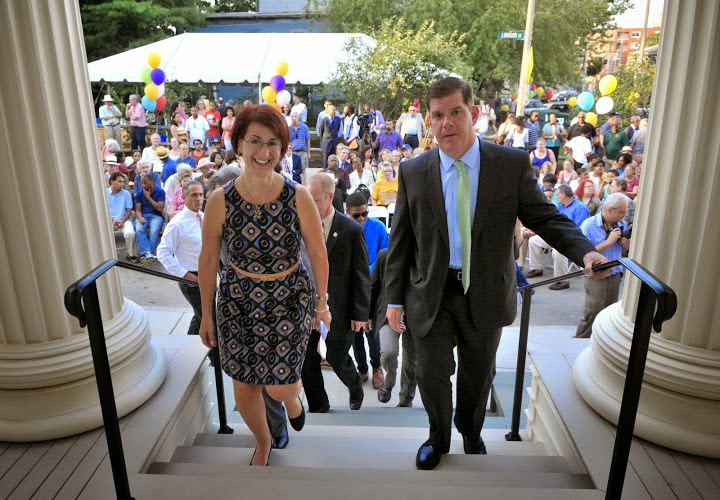 I needn’t have worried.  Mayor Walsh toured the house with us and then headlined the speaking program.  We were delighted to introduce him to our work firsthand.  We acknowledged our many donors, led by Ron Druker and by Geoff Caraboolad of Metric Construction, who took on the project as a labor of love, our public and community partners; an excellent team of consultants; and of course our very engaged board and dedicated staff.  It?s fair to describe the general mood as euphoric.  I think the depth of its former decay made the house?s transformation even more dramatic. 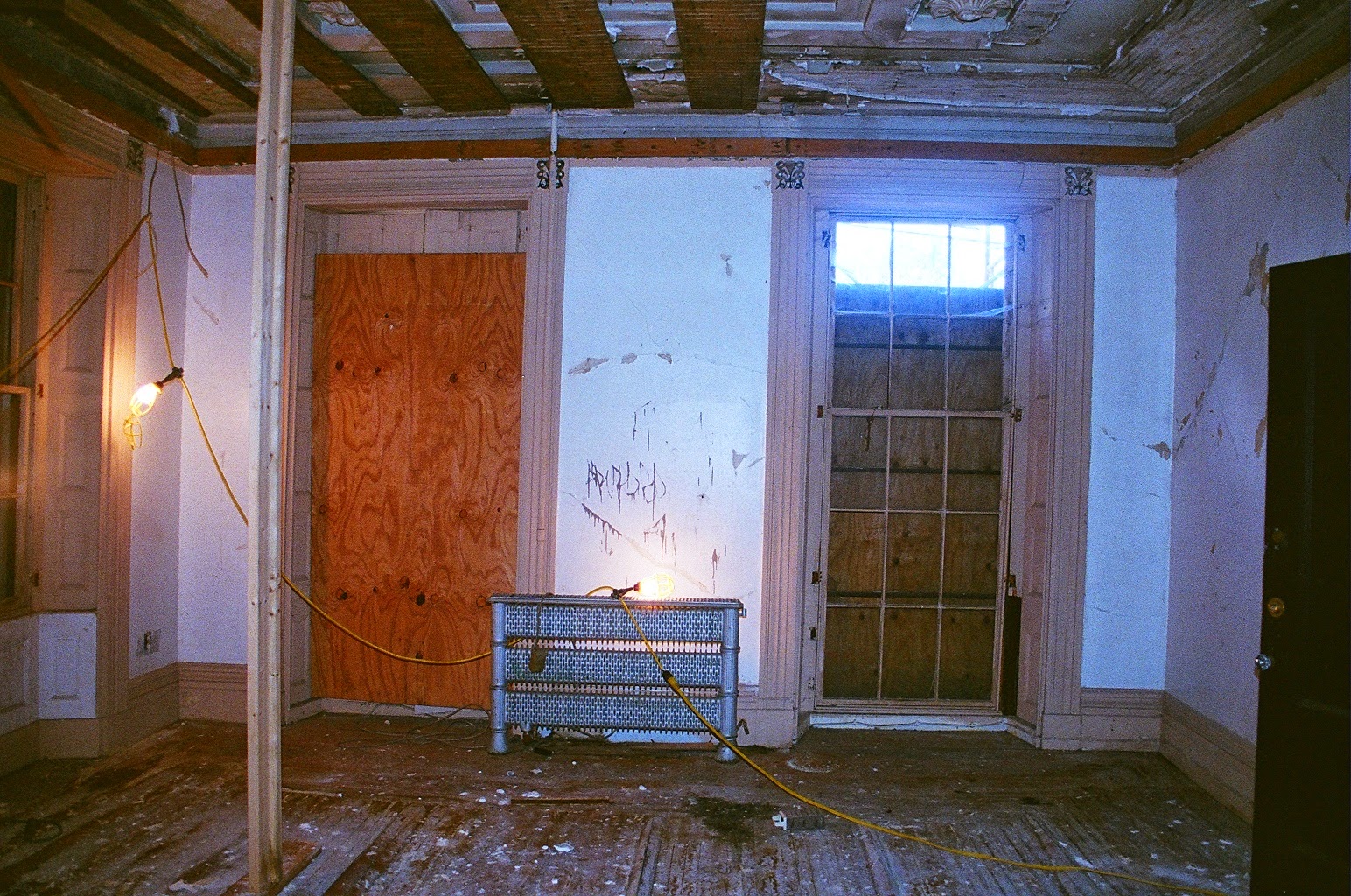 While every HBI project, like every historic building and neighborhood, is different, the Alvah Kittredge house is in many ways a classic HBI project:

?    We adopted an orphaned neighborhood asset, rich in history and architectural presence, that had a price tag too big for most owners or profit-motivated developers to tackle.
?    We combined its natural attributes with new energy-efficient systems and materials.  (Enough of Nathaniel Bradlee?s fragile Victorian entry hall somehow survived, hidden above a dropped ceiling, to be restored and featured in the house today.)
?    We provided five new homes, two of them affordable, in a growing city with a housing shortage.
?    We hopefully set the 180-year old Kittredge House on a path to another 180 years of useful life.
?    By letting the house sing its stories again, we?ve shown that Highland Park merits the same kind of investment as other more well-known Boston neighborhoods.

Now comes the fun part:  as we have successfully done in other neighborhoods, we?ll be watching our efforts stimulate investment by others that will help to restore pride of place in the Highland Park neighborhood. 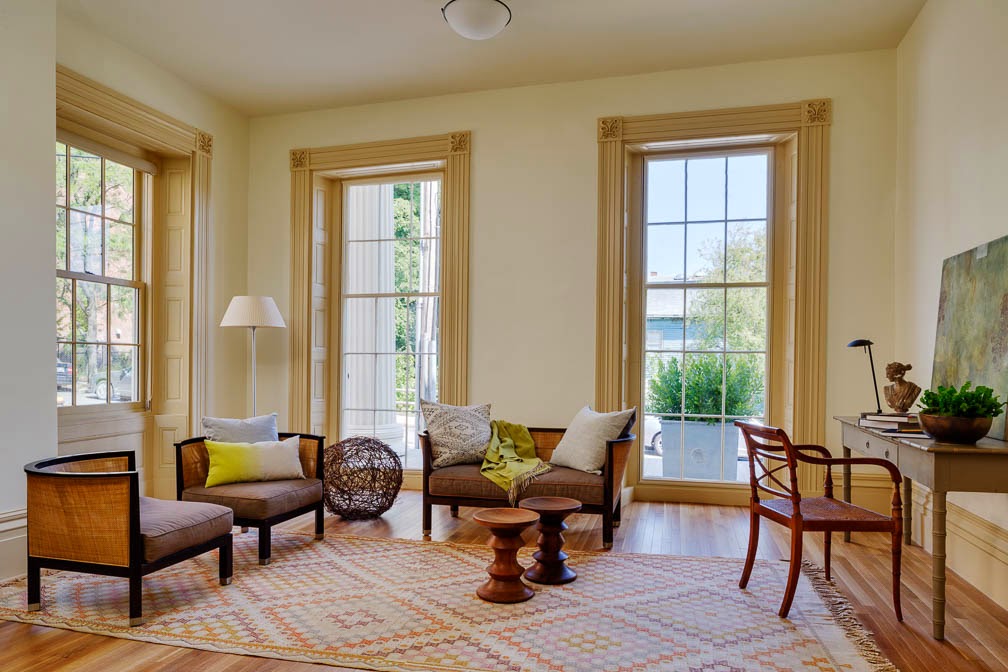