Alvah Kittredge House to be Awarded BPA Award in October Posted at 14:09h in Blog by HBI Administrator

HBI is proud to learn that its rehabilitation of Roxbury’s Alvah Kittredge House (1836) will received a Boston Preservation Alliance Award in October.

The $3.8 million project, completed in August 2014, transformed the long-blighted Greek Revival mansion into five residential units, two of which are designated affordable housing.  Built in 1836 for Roxbury businessman Alvah Kittredge, it was later owned by prominent Boston architect Nathaniel Bradlee and the 1970s-1980s headquarters of Roxbury Action Program.  Vacant since the early 1990s, the building was very nearly lost to severe deterioration. 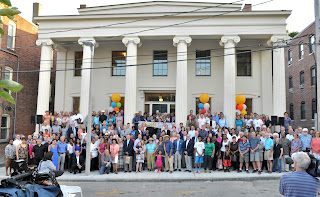 Nevertheless, HBI was able to gain control of the property in 2011 with the help of the City of Boston and community leaders, and raise more than $1.3 million in charitable contributions through its Trilogy Fundcapital campaign in 2012-2013.
HBI has already been honored by the Massachusetts Historical Commission this year with one of its Massachusetts Preservation Awards, and Preservation Massachusetts also awarded HBI and the Kittredge House a Paul E. Tsongas Award at its May 2015 awards ceremony.
HBI is grateful to the Boston Preservation Alliance for its support and for the honor of receiving one of its distinguished preservation awards.