Posted at 11:11h in Blog by HBI Administrator 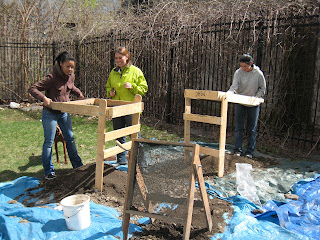 One of the biggest challenges HBI encountered during construction at the Eustis Street Fire House was excavating next to a historic cemetery that contains many unmarked graves.  Although we made every effort to minimize digging, there was no way of avoiding it altogether, since we were building a new addition behind the fire house on the footprint of the earlier stable addition, which collapsed 20 years ago.   Our new addition would not include a basement, but it needed a foundation and footings, so some excavation was unavoidable.

Historical research revealed that the land beneath the fire house had once been part of the Eliot Burying Ground.    Further, town records stated that when the fire house was built in 1859, a ?large number of human remains were thrown out in excavating for the cellar.?   It was a little shocking to learn that our predecessors would simply ?throw out? the remains they encountered, and it was not clear where they would have put them ? but hopefully not where we needed to excavate. 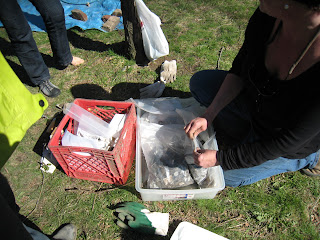 A lot has changed since 1859, including attitudes about appropriate and respectful treatment of human remains.    The Massachusetts Historical Commission required that HBI conduct a thorough archaeological survey in the areas we needed to dig to make sure that we would not disrupt burials.  If graves were encountered, we would either need to work around them or determine a plan for removing and re-interring the individuals elsewhere.  Neither would be easy.

We hired UMASS Amherst?s Archaeological Services to conduct the dig.  We were told that we would certainly find ?disarticulated remains? (which are bones and bone fragments that would have come from earlier grave disruptions) as well as archaeological artifacts.  We hoped NOT to find intact burials.  As it turned out, we did find a couple of graves in the area where we had planned to place footings, but thanks to our architect and structural engineer?s creativity, we were able to relocate the footings and span over the graves, leaving them undisturbed.   The excavated soil was screened by Boston?s City Archaeologist and volunteers for artifacts and disarticulated remains.  During construction, we were required to hire an archaeologist to observe any digging and set aside any remains encountered.  The final steps in this process are to gather all of the remains, separate human from animal bones, and reinter the human bones together in a small box behind the fire house.
All of the bones were recently examined by anthropologist Harley Erickson.  To a layperson, most of the animal and human bones look the same, but Harley was able to quickly and effortlessly separate one from another.  When asked how she tells the difference, she shrugged and explained that she has spent many, many hours studying human skeletons.  Not only can she identify which fragments are human, but she can often tell what type of bone it is.  She also was able to identify types of animal bones we found, which included both wild and domestic, and some that had been butchered (perhaps discards from a fireman?s meal?)
The fifty or so human bones uncovered are now in the possession of the cemetery department awaiting reburial.  After reburial in the Eliot Burying Ground, a marker will acknowledge the remains. 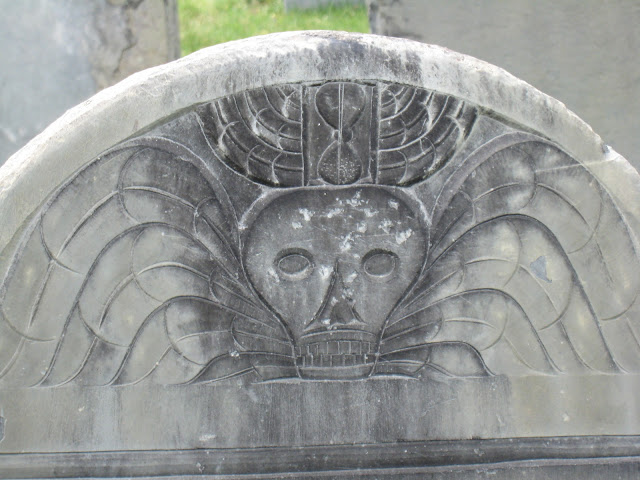