Posted at 11:09h in Blog by HBI Administrator 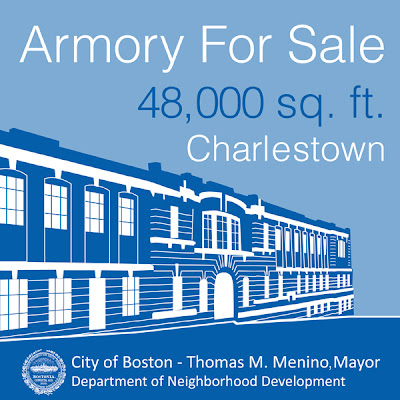 This just in from DND: Want to redevelop a piece of history? Last week, DND put the Charlestown Battalion Armory out for RFP.
Located at 374-398 Bunker Hill Street, the Armory provided drill space for four local military companies, including the 192nd Infantry Regiment – the oldest combat regiment in the United States army.
The building is a large, Georgian revival masonry structure built in 1907, featuring architectural details such as a partial gable slate roof and decorative cast stone and lentils. The armory fills an entire block on Bunker Hill Street between Auburn and Baldwin Streets.
In 1968, the Commonwealth of Massachusetts Commission deeded the Armory to the Trustees of the Boston Public Library, which used it as book depository, most recently for the Jordan Collection, the largest collection of children?s books in the world.
A photo of the interior of the Armory ran in this development roundup in Saturday?s Boston Globe.
The RFP is available at http://bit.ly/ArmoryCtown