May 19, 2010 Block Party Kicks off Rehabilitation of New HBI Home in Roxbury

Posted at 14:23h in Blog by HBI Administrator 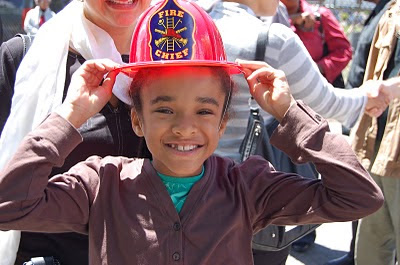 Historic Boston Incorporated kicked off construction at the Eustis Street Fire House last Saturday with a festive ?Revival? for 200 neighbors and friends on Eustis Street in Roxbury. It was a long awaited celebration of local history and Dudley Square?s revitalization. By most estimates, it was also a triumph of patience and dedication.

The distinctive brick building on Eustis Street in Roxbury, built in 1859, was in peril from years of neglect. Twenty years ago, HBI was instrumental in installing large wooden supports to keep the walls from falling down. Over the years, many have hoped that the building would be redeveloped with a new use, but no one was sure what to do with the small building. 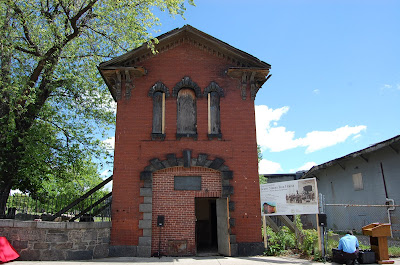 ?As I reflect on this occasion it brings me a lot of happiness,? said Clarence ?Jeep? Jones, Chairman of the Boston Redevelopment Authority who recalled growing up in the area.

Restoring a piece of the past means a lot to a community that has seen tremendous change, he said during a dedication ceremony.

The restoration will include opening the adjacent 1630 Eliot Burying Ground to the public for the first time in decades. Some who joined in the celebration said they had walked by it for their entire lives wondering what it was like inside. 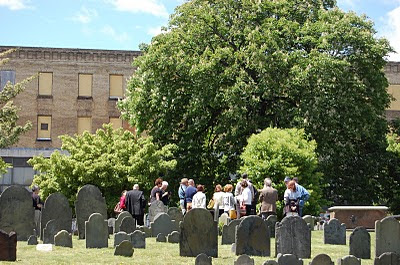 Opening the cemetery will help reconnect the neighborhood with its past, Jones said. Many of the names on the gravestones are familiar names on Roxbury street signs and parks.

Mayor Thomas M. Menino said the project is part of the city?s commitment to historic preservation, which is being incorporated in its strategic plans.

?As we think about our future, we have to take into account our past,? he said. ?We have to keep the inherent value and character of our city.?

The progress of the project is the result of several groups working together to find solutions, Menino said. 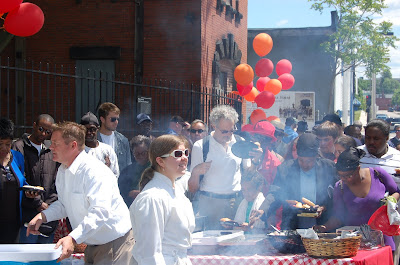 ?We believe in partnerships in Boston,? he said. ?We?re going to do all we can to work with you to preserve the past for the future.?

The move from downtown Boston to Roxbury is an important indication of the HBI?s commitment to historic preservation in Boston?s neighborhoods.

?This is a small building, but this is a big day for Historic Boston,? said HBI board President Matthew J. Kiefer. ?We are joyful for the opportunity to renovate this building, and we are joyful to move closer to the neighborhoods we serve.? 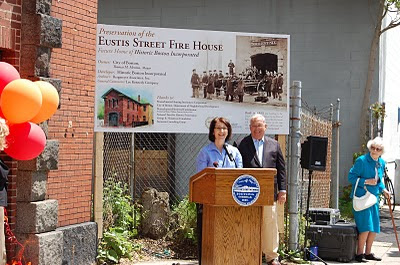 Work will be completed in November and HBI will move in by the end of the year. The project will include interpretation of the building?s rich history of firefighting in the city and its use as a clubhouse for Spanish-American War veterans.

?And, we hope by the end of 2010, we will be telling a story of redemption here,? said Historic Boston Executive Director Kathy Kottaridis.

To read about the Eustis Street Fire House groundbreaking event in the news, please click here to visit Historic Boston’s new Press Center. To see more photographs of the day, check out our Flickr page. 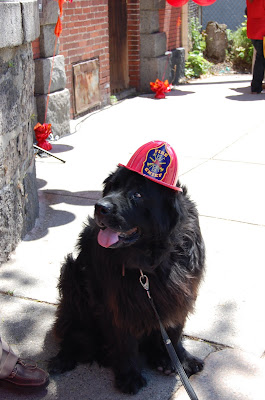