Breaking Throught the Glass Ceiling at The Kittredge House

June 27, 2014 Breaking Throught the Glass Ceiling at The Kittredge House

Posted at 17:05h in Blog by HBI Administrator 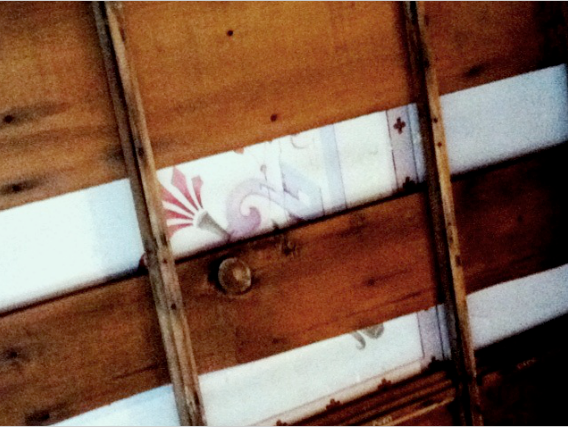 One of the most striking features of the Alvah Kittredge House interior that was still mostly intact when Historic Boston acquired the building was the multi-colored glass ceiling in the main entry hall. Bordered by dark wood molding and bracketing, it is definitely not Greek Revival in style and was likely installed in the late nineteenth century, perhaps after the house was moved to its current location. Although it is not original to the 1836 house, it was determined by the National Park Service to be a significant feature that needed to be preserved and retained.

Before construction began, Melrose Glass was engaged to carefully remove and store the remaining glass panes (some pieces were missing). Once removed, we were able to see that behind the glass panes was wood strapping that held in place the original plaster ceiling. In between sections of strapping we were able to see the original ceiling which was embellished with decorative painting, seen in this photo at the top of this post.
We carefully removed the wood strapping in hopes we could better photograph the original painted ceiling, but unfortunately the plaster immediately collapsed when the strapping was removed.

After Melrose removed the panes of glass, we discovered that the finish was fragile and flaking. We thought the finish might be a marbleized paper that had been adhered to the glass, so we brought a few of the panels to Andrea Gilmore and Melissa McGrew at Building Conservation Associates, Inc. (BCA) to examine the finish and advise on next steps in its preservation. Melissa examined the panes under a microscope and was able to see (from the absence of pulp) that the finish was marbleized paint, not paper. 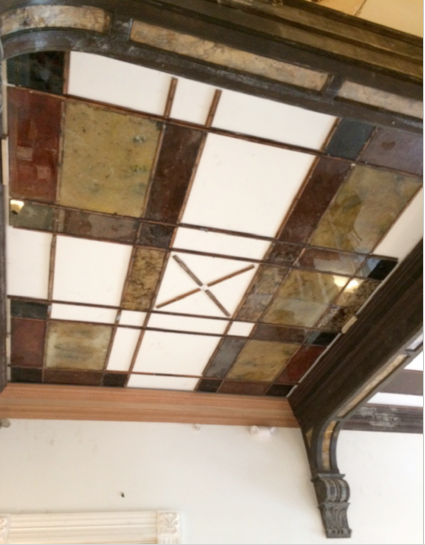 After considering several approaches, the decision was made that rather than trying to restore or repaint the beautifully marbleized original finishes, we would instead paint the ceiling behind the flaking panes in a color that closely matched the predominant color. Together with BCA, we reviewed the collection of glass panes and identified a handful of reoccurring colors that repeated in the ceiling. BCA then matched those colors to Benjamin Moore colors. It is hoped that once reinstalled, the paint will no longer flake, and we believe the matching solid paint on the ceiling will blend enough that the missing paint will not stand out.
The next challenge was how to replace the missing panes. The recommendation was to photograph some of the more intact marbleized paint panels and then print and adhere the photo matches on clear glass panes to fill in the areas of the ceiling that were missing. For that task we worked closely with Ed Spinney at SignArt Inc. in Malden, who was able to match several of the typical paint patterns in the intact panes. We then looked at photos of the ceiling before it had been removed to determine which color patterns to place in which locations.
Melrose Glass has now begun to reinstall the glass panes that were in the best condition, as seen in the photo below. In the weeks to come, the remainder of the ceiling will be installed. Stay tuned for photos of the finished ceiling.