Bronson Pinchot in Roxbury: Why I Love the Greek Revival Park I

April 12, 2013 Bronson Pinchot in Roxbury: Why I Love the Greek Revival Park I

Posted at 16:14h in Blog by HBI Administrator 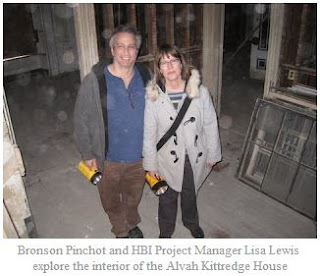 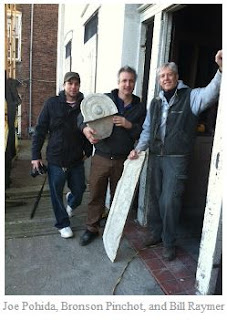 Actor Bronson Pinchot has an irrepressible enthusiasm for Greek Revival houses.  His passion is evident in his DIY Network show The Bronson Pinchot Project, which documents the revitalization of his 1840 Greek Revival home using architectural salvage.  Bronson recently learned of Historic Boston?s plans to rehabilitate the 1836 Greek Revival Alvah Kittredge House in Roxbury from Restoration Resources owner Bill Raymer, and decided to come to Boston to see the house for himself.  Bronson, Bill Raymer, and carpenter Joe Pohida toured the Alvah Kittredge House last week with HBI project manager Lisa Lewis, searching for potential salvage that HBI won?t be able to reuse in our renovation. We asked Bronson to write a guest blog post explaining why he loves Greek Revivals.  He happily obliged, but because he has more to say than we can fit into one blog post, promised to return with future guest posts.  Here is part 1.
There are two ways to cut a dashing figure. One is to go out and buy nice clothes. The other is to haunt the gym and build up your body ?til it excites comment whether you are wearing a tuxedo, or a t-shirt and jeans, or nothing at all.
Greek Revival is the only style in all of American architecture that takes the second course of action.
The rest is all pearl necklaces on boxy bodies. 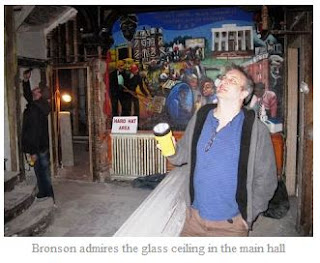 I have seen remnants of 16th century domestic architecture in Florida. These are endearingly blocky boxes. I have seen pilgrim century survivals in Massachussetts–pointy asymmetrical saltboxes; Colonial townhouses in Portsmouth–weather-boarded boxes with elegant broken arch overdoors; Federal piles in Maryland and Virginia, which are semi-transparent boxes with calligraphic mullion tracery and reticent classical details in shallow relief.  American domiciles of the 16th through very early 19th centuries are always touching, often poetic, sometimes ethereal, and always boxy.
Around 1825 American architecture puts aside the tiara and the satin sash, plunks itself down on the bench press and pumps up its chest and shoulders. Out juts the portico supported by splendid columns and capital capitals–the sober Doric, the iconic Ionic, the flowering Corinthian and the palm-leaf-and-acanthus Tower of the Winds. It is a statement as audacious, as commanding and as thrilling as the first four notes of Beethoven?s Fifth Symphony.
In the 1850?s corbels and gable-edge rick-rack creep in. By the end of the decade columns disappear and we are back to boxy cakes with Italianate icing. But between1825-1850 Greek Revival reigned supreme. That is why in its day it was known simply as ?The National Style.? Mark Twain described early 19th century America as a landscape of ?molasses-candy colored Parthenons.? Which is why in the next installment I shall discuss the utter wrongheadedness of painting these structures in pale colors–like my own blindingly white Greek Revival home.
–To be Continued.