Posted at 15:05h in Blog by HBI Administrator 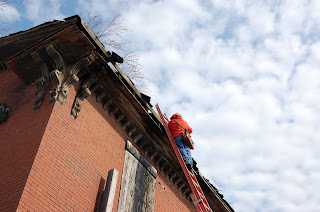 Historic Boston is pleased to report that the Edward Ingersoll Browne Fund for the City of Boston announced $110,000 in grants this week for HBI preservation projects in Dudley Square, Fields Corner/Dorchester, and Hyde Park.

The Browne Fund designated $75,000 to the Eustis Street Fire House for the preservation of exterior decorative elements of the building including the richly carved brackets and eaves of the building, the sandstone window surrounds and restoration of the firehouse door. It also includes re-creation of the 19th century ?Torrent Six? sign that identified the early volunteer fire brigade that occupied the firehouse.

Browne Fund support will also help finalize design and fabrication of a new fence along the east side of the building designed by artist John Taguiri that represents early fire fighters pulling a Hunneman steam engine. The fence and interpretive panels in the patio space alongside the fire house will honor the history of the building and its importance in the development of municipal firefighting in Roxbury and Boston (rendering seen above). 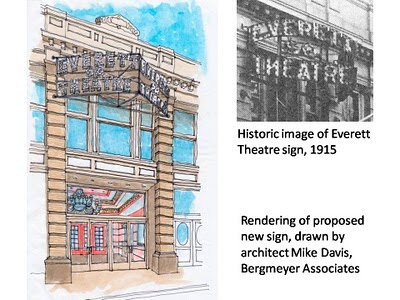 In Hyde Park?s Logan Square, a $30,000 grant will support the re-creation of the historic Everett Square Theatre?s sign based on a photograph of the 1915 original. It will be installed above the theatre?s entry foyer, which will be re-opened for the first time in over 25 years to create a new 400 square foot space for a dynamic art installation, displays, and events that it is hoped will attract attention to the presence of the theatre and help build support for its rehabilitation. HBI prepared the grant application in partnership with Hyde Park Main Streets and building owner Pat Tierney. The sign and foyer improvements are part of a fa?ade project expected to represent an $80,000 investment in the streetscape of Fairmount Avenue. 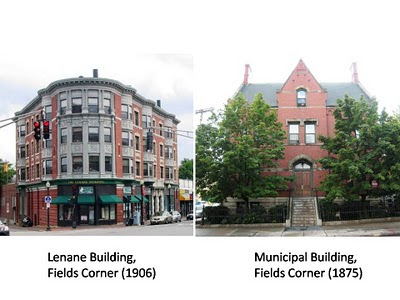 In Fields Corner, three prominent historic buildings will be lit, supported by a $5,000 Browne Fund grant, $5,000 from the Trinity Financial Charitable Fund, and $5,000 in contributions by the owners of the three properties. The Lenane Building, built in 1906 and owned by Dorchester House, is Fields Corner?s most architecturally sophisticated building and sits on the southern tip of the intersection of Dorchester Avenue and Adams Street?an intersection that is being rebuilt and enhanced as part of the city of Boston?s Dorchester Avenue Project. The former Municipal Building was built in about 1875 and is the only structure in the district listed on the National Register of Historic Places. Now the headquarters of the Fields Corner Community Development Corporation, tree pruning and lighting will enhance its Adams Street fa?ade and provide a brighter, safer pathway to an adjacent public parking lot. Finally, the former Dorchester Theatre building at Dorchester Avenue and Park Street (pictured below) will have a bit of its theatrical past revived through the installation of lighting at the prominent corner entry arch, which used to contain the theatre lobby. Now home to shops, offices, and housing, the building?s owner, H. Levenbaum Realty, recently completed a major exterior repair project that refreshed its playful color scheme. 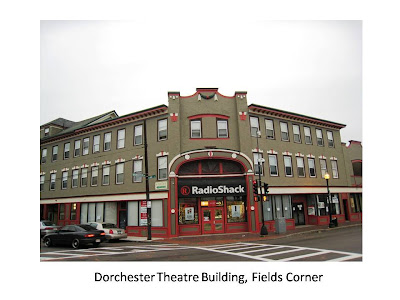