Posted at 14:53h in Blog by HBI Administrator
Blog post by HBI’s new Director of Real Estate Development, Jeffrey Morgan
What did you do for the Fourth of July this year? I was one of 499 guests aboard the USS Constitution, America?s Ship of State, for its annual turnaround cruise as part of Boston Navy Week. The eight-day event commemorated the Bicentennial of the War of 1812 by hosting service members from the U.S. Navy, Marine Corps, and Coast Guard along with ships from around the world. How did I get aboard? I was one of 150 civilian winners of the US Navy annual lottery drawing. 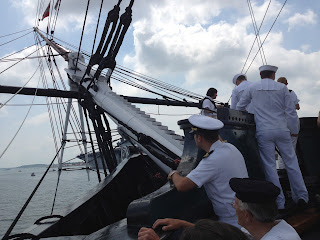 The USS Constitution is the oldest commissioned warship in the U.S. Navy. The Naval Armament Act of 1794, signed into law by President George Washington, called for the construction of six frigates to be built at shipyards along the eastern seaboard. The 44-gun USS Constitution, built in Boston, was launched on Oct. 21, 1797. By the War of 1812, USS Constitution had already won previous engagements in two wars: the Quasi War with France (1798-1801) and the Barbary Wars (1801-1805). During the War of 1812, she defeated four English warships. Nicknamed ?Old Ironsides, she remains undefeated in battle.
This year?s event was made by particularly memorable with an escort by the USCGC Eagle, the only other active commissioned sailing vessel in the American military service. The event was further marked with the unveiling of Constitution’s new shipboard bell by retired Cmdr. Bob Gillen, Constitution’s 59th commanding officer, and representatives of the Bellingham Bell Company. The inscription on the bell commemorates the bicentennial of the War of 1812 and is the fourth bell in the ship’s 214-year history. 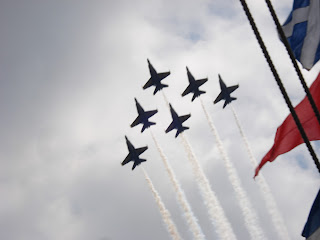 During the voyage, sailors performed a 21-gun salute at noon near Fort Independence on Castle Island. Fort Independence is a state park that served as a defense post for Boston Harbor at one time. As Constitution passed amphibious assault ship USS Wasp (LHD 1) it rendered honors with a 19-gun salute culminating with a flyover demonstration by the Navy Flight Demonstration Squadron Blue Angels.

Lastly, a 17-gun salute was performed to the City of Boston near Coast Guard Station Boston, the former site of the Edmund Hartt Shipyard where Constitution was built. The shots honored the 16 states that comprised America when Constitution launched in 1797 and one in honor of the ship.

She returned to her berth at approximately 1:30 pm with memories that will last a lifetime.