Posted at 15:55h in Blog by HBI Administrator 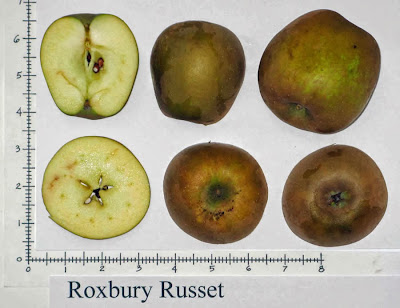 This fall Discover Roxbury hosted a talk by apple authority John Bunker, founder of Fedco, a Maine seed, tree, and garden supply company with a focus on organic growing.  The topic of the evening was America?s oldest apple variety, the Roxbury Russet, which was developed right here in Roxbury by Joseph Warren, father of patriot Dr. Joseph Warren.  The elder Warren was a successful farmer in Roxbury until he fell from a tree in his orchard, receiving injuries that resulted in his death.
John Bunker seems to know everything there is to know about apples ? far too much to repeat here.

Apples are not native to North America, but rather are believed to have originated in the mountains of Kazakhstan and later brought to other continents.  Apple and pear orchards once flourished in Roxbury and Dorchester, where the soil is rocky and perfectly acceptable to these fruits, if not other crops (hence the name ?Roxbury? ? originally spelled ?Rocksberry?).  Did you know that if you plant a seed from an apple you find especially tasty, the fruit from the new tree will not be just like the parent apple?

To get a reliable apple that is just like the parent apple, it?s necessary to graft a shoot from the parent plant, called a ?scion,? onto a rootstock plant, which will yield fruit just like the mother tree.    New England orchards used to have hundreds of apple varieties, developed for various qualities.  The Roxbury Russet was prized as a ?keeping? apple ? one that could be stored for months after harvesting.  In fact, the flavor continues to develop after it is harvested in the fall and is best eaten later in the winter.  Roxbury Russets were particularly good cider apples, and useful in earlier centuries when hard cider was the beverage of choice.

In the 19th century, agriculture became a big business, and it was decided that there was no longer any need for hundreds of varieties of apples.  Large orchards focused on growing only a few varieties that looked pretty, and the Roxbury Russet was not one of them, as it has fairly rough, brownish skin.  And with the development of refrigeration, the longevity of the Russet was no longer treasured.  But fortunately, a few forward-thinking people recognized the value of the heirloom varieties and saved them for future generations to rediscover.    (To find out about local efforts to encourage urban fruit trees, check out the Boston Tree Party ? www.bostontreeparty.org)
When you find a Roxbury Russet, here?s a good way to use it.  It?s a perfect, light, post-holiday meal.