Construction Underway at the Golden Building

Posted at 09:54h in Blog by HBI Administrator 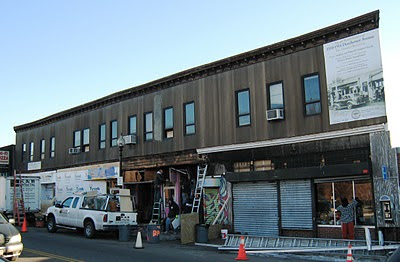 Contractor Kevin Piccinin and his crew from K & B Contracting started work bright and early on the morning of December 29th on northernmost of the four ground floor retail spaces. By the end of this week they will have demolished the existing hodge podge of storefront configurations, materials, and signage and will have installed framing and walls that will accept the new matching store windows and entries. While they wait for the new window glass to arrive, work will begin removing the metal siding from the upper floor and preparing it for new clapboard siding, trim, and windows. 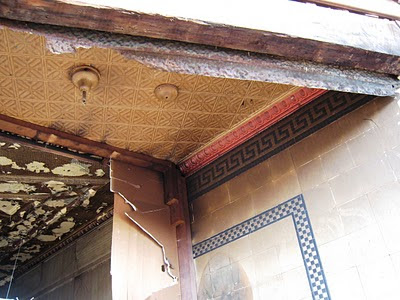 During the demolition process, the crew uncovered layers of the building?s earlier features. The northernmost store has a brightly painted 1890s pressed tin ceiling and black and white tile mosaic walls from the 1920s under is existing exterior fitout. The space that now houses the Magic Wok restaurant was hiding a hand-painted sign under its most recent sign band that read ?Fields Corner Spa.? The southernmost storefront contained remains of what is likely the original ca. 1895 divided light transom windows at the top of the storefront. Fragments of what appeared to be cut stone pilasters in historic photographs (but which turned out to be molded stucco) were uncovered in several places along the front of the building. 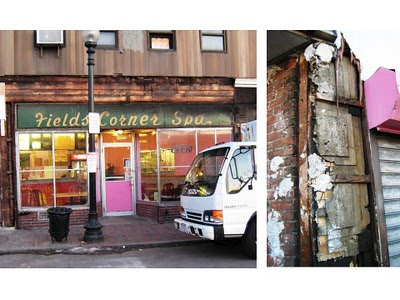 Unfortunately, as is typical in retail spaces where tenants come and go with great frequency?each making changes to the appearance of their space to fit their own branding needs or to keep themselves as up-to-date seeming as possible?all of this detail is now fragmentary and in too poor of a condition to be saved. However, it does vouch for the significance of this building, and supports the goal of this project to restore some of its historic feel and street presence.

Construction is expected to be wrapped up in 8 or 9 weeks, weather permitting. Stay tuned to the HBI blog for more updates.