Posted at 15:18h in Blog by HBI Administrator 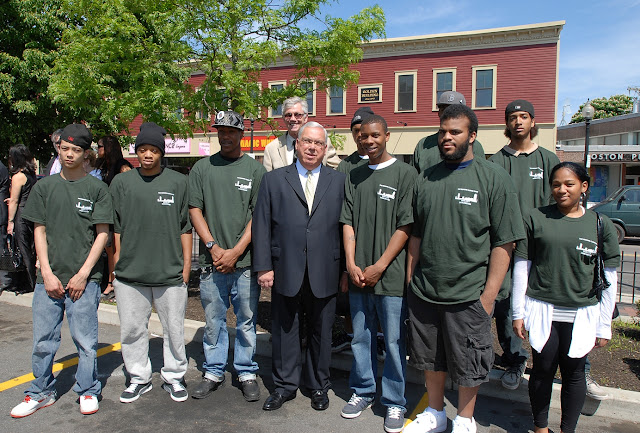 Fields Corner?one of HBI?s two Historic Neighborhood Centers districts?is lucky to be home to the Dorchester Youth Collaborative, an important center of programming for at-risk teens from Dorchester and beyond. For over 30 years the DYC has provided mentoring, job training, and crisis intervention for local teenagers. The organization?s founder and director, Emmett Folgert was one of twelve people recently honored by the National Forum on Youth Violence Prevention with a ?Champion of Change? award at a ceremony held at the White House.

As part of the Golden Building rehabilitation project last year, HBI worked closely with DYC to install a new HVAC system that not only made its space more comfortable and energy efficient, but allowed for the removal of several defunct and unsightly window air conditioning units from the front of the building. Supported by a grant from the City of Boston?s Partners with Non-profits Program and by a small loan from building owner Stephen Golden, these building system improvements have significantly reduced DYC?s utility expenses, allowing more money to be spent on the organization?s important mission.
Congratulations to Emmett, and to the ongoing work of this important Dorchester organization!
Click HERE to read a story on Boston.com and watch a video of Emmett receiving his award.