Posted at 16:09h in Blog by HBI Administrator 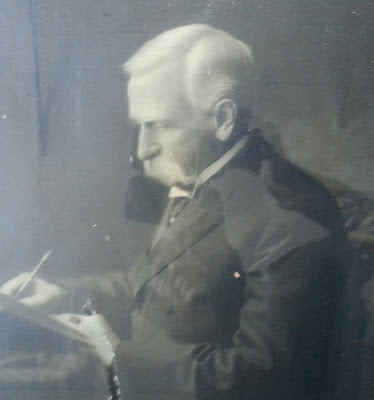 The most elusive story of recent HBI projects is that of the original occupant of the Alvah Kittredge Housein Roxbury?s Highland Park: Alvah Kittredge himself.  We know from Kittredge genealogies that he was born in 1798 in New Hampshire and came from humble beginnings. We know he was a Roxbury Alderman and one of the founders of Forest Hills Cemetery from public records.  We know he was a cabinet maker and entrepreneur from furniture with his label that still occasionally is listed at auctions.  We know he was a devout orthodox Congregationalist and helped found the Eliot Congregational Church on Walnut Street in Roxbury from a sermon given from the church at his death in 1876.  We know he had several children, one of whom was responsible for Bombay India?s first horse-drawn rail cars.  And we know he is buried at Forest Hills near the other founders of the historic garden-style cemetery.
But it?s been nagging us that we don?t know what Alvah Kittredge looked like.  We had no knowledge of existing photos, paintings or sketches of this seemingly prominent man in any local archives.  But, as some might say — especially in this case —  ?the Lord works in mysterious ways!?   Pastor Evan Hines at theEliot Congregational Church invited us to spend a Saturday morning at his church, one that HBI has worked with many times in the past, to talk about preservation plans.  We asked him about archives for his church, founded with the help of Alvah Kittredge in 1834.  He showed us a wall of record books and publications in his office and encouraged us to come back to peruse them.   On a tour of the building, though, we found more boxes and a stack of framed photos and asked if we might quickly sift through them.  Sure enough, there was Deacon Alvah Kittredge in not one but two photos.
There are close Church associations with the Kittredge House that we?re all just learning about.  As The Diaconate: A Commemorative Sermon, preached at Eliot Congregational Church for Alvah Kittredge?s funeral on June 18, 1876 states ??his house soon became one of the rendezvous for those contemplating a new church. Religious meetings and social gatherings were held there?the ecclesiastical council which organized the Eliot Church were entertained there; ?no one was more prominent and efficient than he in the gathering and formation of the church?.

We have more research to do at the church, but as we break ground next week on the house?s rehabilitation, it’s nice to put a face to a name, and and to link Mr. Kittredge back to another great Roxbury institution.