Posted at 15:13h in Blog by HBI Administrator 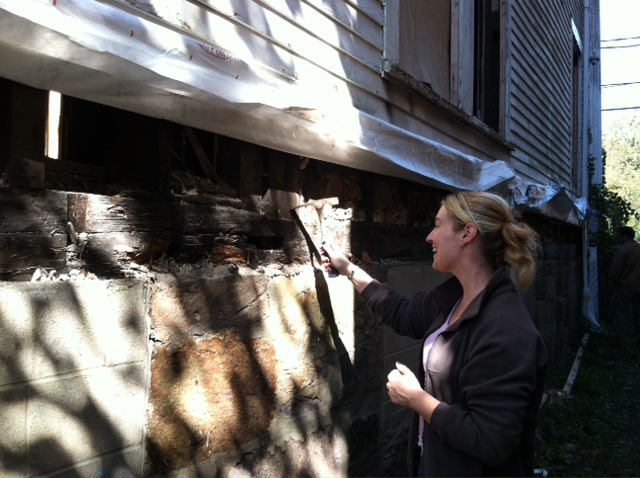 Historic Boston is working with structural engineers John Wathne and Stephanie Davis of Structures North Consulting Engineers on the rehabilitation of the Alvah Kittredge House in Roxbury.  Specialists in historic structures, we asked Structures North to write about their approach to identifying the structural repairs necessary in an existing building that has suffered from years of neglect and weather exposure. Here?s what Stephanie had to say: 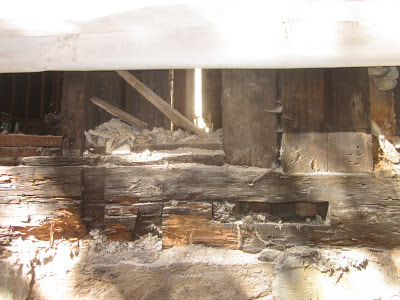 As preservation engineers, our objective is to, when called upon, stabilize and reinforce a building with the minimum possible irreversible impact on historic fabric. Unfortunately, most of the buildings we work on require more significant repairs, such as the Alvah Kittredge House.  The Alvah Kittredge House is an historic wood framed mansion in Roxbury, MA, with brick and stone foundation walls.  The building has been empty for a while and has significant damage at it rear from a fire.  Historic Boston is working to restore the mansion to its original glory. 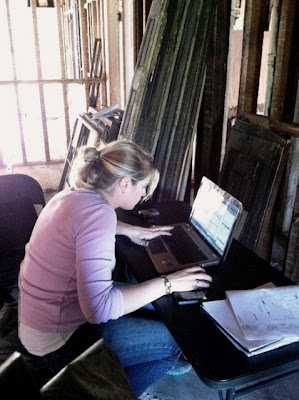 The first step with any building is to complete a thorough survey of the existing framing elements, floor and roof framing, and wall studs. At the Alvah Kittredge House, this has been done during multiple site visits to the house as more framing was exposed. Because of the fire damage, and extensive water damage, we first needed to do remedial shoring of the building so that it was safe to explore further.  A review of the building allowed us to locate the unstable floors, and shoring walls were installed from the foundation to the roof. 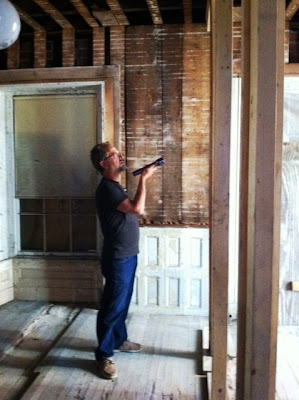 Once the whole structure was made sufficiently safe, we visited it again to examine and measure the floor and roof framing. With tape measures in hand, all of the exposed structure was measured for size, spacing, and length. This information is required for us to determine if the existing structure meets the current building code. While we measured the framing, we also noted its current condition, both visually and physically. Most deteriorated wood members can be identified visually: the outside dimensions may seem to have decreased, the face of the wood may look weathered, or there may be visible mold or vegetation growth which is an eventuality of prolonged moisture.
There are also members that only have minor visible signs of deterioration, and where to determine the full extent of damage we must use a?hands-on? approach. Decaying wood is brittle when picked at and soft when hit with a hammer, giving a dull thud sound. Good, sound wood has a crisp ?ringing? sound to it. All of the wood conditions get recorded and noted on plans.
After our site review of the framing, we take that information back to our office and create existing framing plans. On these drawings, we note what framing is to be replaced or reinforced based on their conditions. If a member needs to be replaced, the first choice is to replace it ?in kind,? which means of the same size and material. If the damage is a result of the original being insufficient in size, the new member may be altered to correct the deficiencies.  Typically, joist or beam reinforcement is called sistering. A sister is a new framing member connected alongside of an existing member for its full or partial length. It allows the existing member to remain while providing additional needed strength. Based upon the length of the member and load it is carrying, the sisters can be natural wood, manufactured wood or even steel and can be located on one or both sides of the existing member.  Where sistering is done for the sake of deterioration, the existing members, when retained, are treated with borate based preservative, which will prevent insect damage and some types of fungi that could cause additional rot.  In extreme states of decay the existing members are simply replaced.
The floor framing is also analyzed to determine if reinforcing is required to meet the current building code, in cases where long-time empty buildings are again used or there is a change in use. Historic structures were typically built according to standard practices of the time, most of which were based upon years of practical trial and error and little design theory, if any. In cases where a structure was actually designed by an engineer, it would have been based on an old building code.  In some instances, today?s building code allows for retention of existing historic structural elements that do not meet current standards, as long as historical loading conditions are not changed.
Because of the current state of the Alvah Kittredge House and the extensive renovation to be completed, the full structure is required to meet the current building code. The reinforcements required per our framing analysisare then added to the scope of work shown on the plans,in addition to the interventions required by deterioration. Because of the extensive damage and insufficient framing capacities, the required re-framing work will be significant.  This must be done in a way that does not detract from the visual historic interpretation of the building.The design reinforcements and repairs will be detailed and completed during the building rehabilitation. If we have done our job correctly, no one visiting the building will see our work or know that we have been there.