Posted at 15:15h in Blog by HBI Administrator 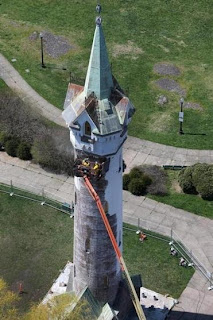 The Ferdinand Building isn?t the only Roxbury structure with construction cranes around it this summer.  A little further south, the Cochituate Standpipe, or the Fort Hill Tower, is undergoing considerable preservation repairs to the 144-year-old structure.

The City of Boston will soon complete the Tower project that includes masonry pointing and repair, painting of the entire exterior of the tower, repair and glazing of the windows, metal roof coating and painting of the interior cast iron spiral staircase to the top of the tower.  The Boston Parks and Recreation Department, which oversees the park below, is reconstructing planting beds, improving and pathways, installing new site furnishings and renovating the entrances to the property.

The Tower is located at the High Fort ? a Revolutionary War fortification located in what is today known as Fort Hill.  There was also a Lower Fort nearby during the revolution, a site that HBI is familiar with because Alvah Kittredge referenced that structure in 1836 as being on the property on which he built his sweeping mansion.
The High Fort was the more prominent of the two and the revolutionary infrastructure lasted there until the 1860s when the City built what is known as the Cochituate Standpipe, one of the early methods for bringing fresh water into Boston.  It is the elegant gothic tower that we know today and it served two purposes ? it enclosed an 80 foot water pipe, but it also historically provided visitors a look-out tower from which they could experience the full vista of greater Boston and the sea.
Architect for the standpipe was the Kittredge House?s second occupant until his death in 1888 was NathanielBradlee, was one of the most prolific of Boston?s 19th century architects.  He was also president of the Cochituate Water Board which oversaw the new water project into Boston.  While the standpipe structure fell into disrepair over the last century, Bradlee?s design gave the community an iconic architectural feature that is a continued source of pride for this neighborhood.
The City?s work preserves an important historic resource for the neighborhood, and it points toward someday renewing this amenity for visitors to once again experience the past and view a very rich present.