Getting to Know Dudley Square: Getting Here

September 30, 2011 Getting to Know Dudley Square: Getting Here

Posted at 15:47h in Blog by HBI Administrator 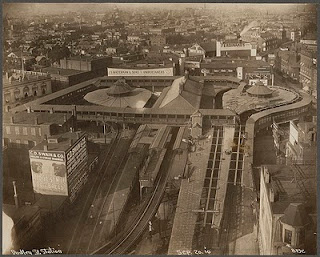 Dudley Square has long stood as a gateway to Roxbury and the surrounding southern neighborhoods of Boston. During the colonial period, when the delicate Roxbury Neck Road, now Washington Street, served as the only land bridge between Boston and mainland Massachusetts, Dudley saw all traffic into and out of the city. During the Revolutionary War, colonists fleeing British occupied Boston, travelled through what would later become known as Dudley Square in order to reach neighboring safe havens.

However, even after the Back Bay and the South End were filled in, and other highways opened into Boston?s downtown, Dudley remained a transportation hub.
With the development of the trolley line, Roxbury became a convenient and elegant suburb. It offered a more civilized and spacious alternative to the crowded intimacy of downtown. It became populated with stores, banks, residences, silent movie houses and, at one time, even a bowling alley.

However, Dudley did not formally become a transit mecca until 1901, when Dudley Station was built as the southern terminus to the elevated train line. The old station was a majestic tribute to the blossoming subway system. The simple geometry of the building, contrasting with the swooping curves of the many tracks that led in and out of it, gave the station a feeling of modern grandeur. In fact, even when the elevated rail was taken down in 1987, and Dudley was repurposed into a bus terminal, the basic design of the old station was emulated, and the reused as much as possible.

As a result of all this, if you are planning on paying us a visit here in Dudley, there are myriad ways by which you can do it. Most of these options flow through Dudley Station, where two Silver Line routes, as well as 19 different bus routes stop in each day. However, Ruggles Station is about a 10 minute walk, for those who wish to travel on the Orange Line or the Commuter Rail.

Another public transportation option, which is a recent arrival here, as well as throughout Boston, is the Hubway system. Dudley is now home to one of the bicycle stations that have been installed in Boston this summer, as a part of the New Balance Hubway bike sharing program. With sixty one convenient locations dispersed all around the city, the Hubway system has made biking in Boston an easy and expedient way to commute or site see.