Posted at 11:45h in Blog by HBI Administrator 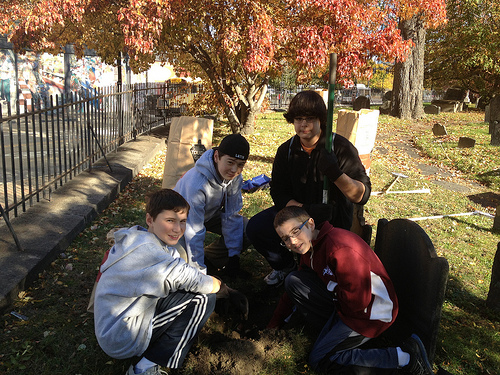 Fourteen year old Devin Quinlin is an eighth grader at Roxbury Latin. Devin is a scholar athelete, who plays three sports for RL, and is particularly interested in English and French. He recently took part in the annual service day at the Eliot Burying Grounds, next door to HBI?s headquarters at the Eustis Street Fire House. We are are pleased that he agreed to share his experience with us as a guest blogger.

On Monday, October 22, a group of thirteen Roxbury Latin 8thgraders, along with two parents and two teachers, went to the Eliot Burying Ground as part of RL?s service day. John Eliot, for whom the cemetery is named, is the founder of our school and as part of our work we tended to his tomb.
We worked for about two hours, raking and bagging all the leaves in the site and picking up small pieces of trash, mainly wrappers, bottles, and cans. We then dug about eight to ten wide holes around the inside of the fence, and planted about 20 daffodil bulbs in each hole.  The flowers should bloom nicely next spring.
At RL, we learn a lot about the importance of history and specifically Boston?s role in American history. John Eliot himself was an important historical figure.  He was known as ?The Apostle to the Indians? and translated the Bible into Algonquin. His tomb is sacred ground to Boston and to The Roxbury Latin School.  We were very happy to be there and we hope our modest efforts help preserve this important piece of ?s history.
See more images of the trip here.