Posted at 10:53h in Blog by HBI Administrator 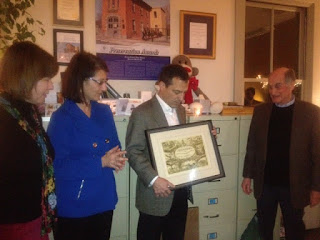 Earlier this month, HBI was honored to receive a very special award from the Boston Fire Historical Society. HBI has been working with the Historical Society since beginning the preservation and renovation  of the Eustis Street Fire House several years ago. Through use of their extensive archives, and exceptionally knowledgeable members, they were able to gather information about the Fire House, and the engines that it housed. They also explained to us how and why the building was changed to accommodate the evolution of fire fighting technology. For example, the rear addition on the Fire House was built to house the horses that were then needed to pull the new horse drawn apparatus. Until that time, the engine that was kept in the Fire House were hand pulled, as illustrated in the metal fence leading up to the HBI offices at the Fire House.

The award certificate is a striking, hand drawn image dating from around the turn of the twentieth century. It depicts several vignettes which illustrate different fire fighting apparatus used at that time, a ladder track, a classic steam engine, a hose reel, a chemical engine, a fire boat, and a protective, or salvage company.

We are exceptionally thankful for this honor, and both of these items are proudly showcased on the walls of the Eustis Street Fire House.