Posted at 14:39h in Blog by HBI Administrator 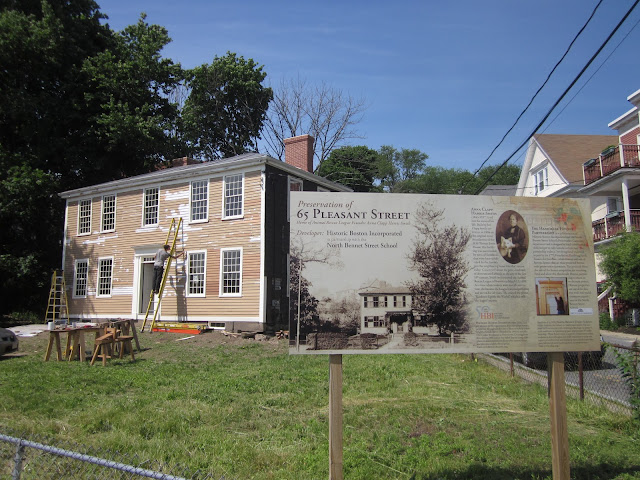 Pop the champagne, another almost-Boston Landmark is in the hands of a happy new owner!  Last week 65 Pleasant Street in Dorchester, also known as the Anna Clapp Harris Smith House, was sold to first time homebuyer Stacey Cordeiro.   For two years, Historic Boston and the North Bennet Street School have been working together to stabilize the structure and rehabilitate the most public facades of the house through a partnership called ?Handmade Houses.?  This endeavor was funded by a grant from the 1772 Foundation.

Built in 1804, the house was owned by  Dorchester?s Clapp family and is thought to have been built on a seventeenth century foundation after the earlier structure burned down.  But it is best known as the home of Anna Clapp Harris Smith, founder of the Animal Rescue League, who lived there for most of her life.   Its designation as a Boston Landmark by the City of Boston is near complete.
The work HBI and NBSS did together was intended to save the structure while giving preservation carpentry students valuable work experience.  Sills were repaired and replaced, shingles were removed and the original clapboards restored or replaced, and a new Federal entrance was designed, built and installed.   New 12/12 windows to match the original were crafted and installed on the front fa?ade, and soon students will complete window installations on the north and south facades.   Masons were hired to repair a bulge in the stone foundation, and the chimneys have been rebuilt.  It was never our intention to complete the rehabilitation of 65 Pleasant Street, but rather to give it a kick start while searching for a permanent owner or developer who would complete the work.

Thankfully, just the right person happened along.  Stacey Cordeiro, who has been living in Jamaica Plain and searching for her ideal house to buy for several years, saw our ?for sale? sign and gave us a call.  Stacey works for a small contractor, Living Structures, which specializes in remodeling projects and energy efficiency retrofits.  Stacey has the skills needed to complete the rehabilitation of the house into two residential units ? one for her and a second to rent.  She?s also a passionate gardener, so the generous yard excited her as much as the house.   We are very excited to see how 65 Pleasant Street evolves as Stacey?s vision for the house becomes a reality, and we have asked her to contribute to our HBI blog as a guest in the months to come.  Stay tuned.