Posted at 14:24h in Blog by HBI Administrator

The long-vacant Alvah Kittredge House in Roxbury faces better prospects after the Boston Redevelopment Authority voted to take the property by eminent domain at its March meeting, determining that the requirements of a preservation easement on the 175-year-old property were not being met. The BRA has signed the house over to Historic Boston for immediate structural stabilization and redevelopment of the historic house for new uses.

Vacant since neighborhood group Roxbury Action Program closed it in 1991, the 1836 Kittredge House is an unusual example of Greek Revival period architecture in Boston with monolithic two-story columns and an octagonal cupola. The house once stood alone on a vast rural estate in this neighborhood, but was later moved and surrounded by multifamily homes as Roxbury urbanized in the early 20th century. The house has experienced serious water damage and two of its six columns are missing. Historic Boston set up staging to support an unstable portico several years ago in conjunction with Roxbury Action Program. 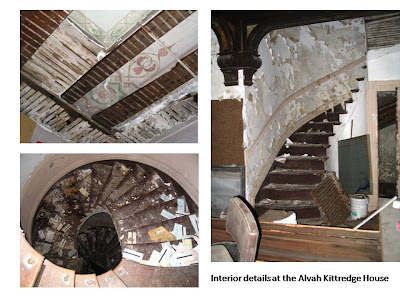 Historic Boston will secure the building and assess feasible redevelopment options for the building?s rehabilitation and re-use. At a round of community meetings in the Highland Park neighborhood, HBI has discovered considerable concern for the building?s current condition and relief at the prospect of seeing the house saved and brought back into the life of the community. 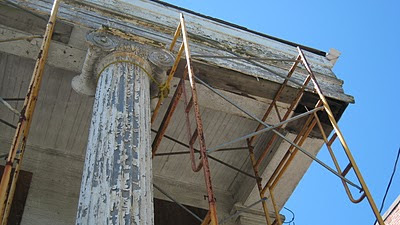 Over the coming weeks, we will update you regularly about progress at the Kittredge House, and tell you more about the history of this important building and generations of its occupants.