Posted at 09:17h in Blog by HBI Administrator 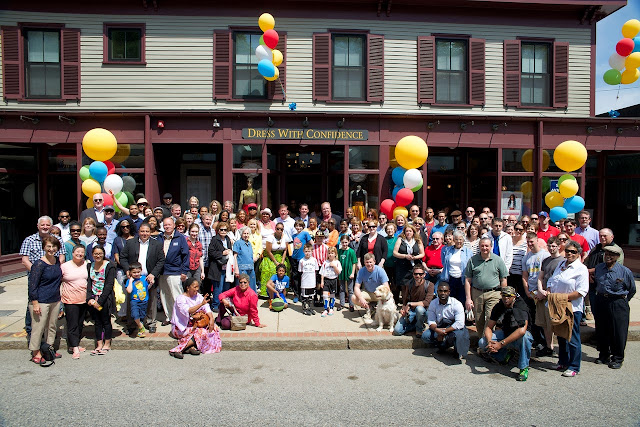 Mayor Walsh, Community Welcome Three New Businesses to Logan Square
HYDE PARK  ? Mayor Martin J. Walsh, Historic Boston Inc., elected officials, and members of the Hyde Park community today welcomed three new businesses to the neighborhood following the recent completion of a $1.3 million rehabilitation of the Vertullo Building, which was built in 1868  — the same year that Hyde Park was founded — and is the oldest commercial building in the Cleary and Logan Squares Main Street district.
The successfully competed project demonstrates that historic building rehabilitation can help to enhance the economic competitiveness of Boston?s neighborhood commercial districts, while also bolstering a sense of place, neighborhood pride, and opportunity.
?It is only fitting that we are here today during Small Business Week and National Historic Preservation Month as we celebrate the revitalization of this once forgotten asset in one of our City?s most historic retail districts,? said Boston Mayor Martin J. Walsh. 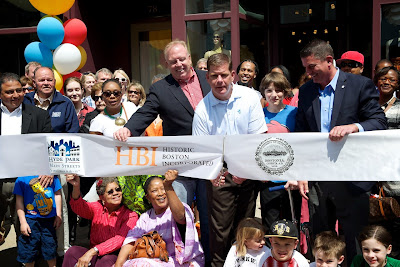 ?The rehabilitation of this building is an investment in the past ? and the future ? of this neighborhood,? said Walsh. ?I want to thank Historic Boston for their vision and commitment to the rehabilitation of the Vertullo Building and other important preservation projects in the City of Boston.?
In his remarks today, Walsh specifically tied the kind of historic preservation for economic development purposes that the Vertullo Building represents to the Imagine Boston 2030 initiative that he announced this week. City and Boston Redevelopment Authority officials will be listening to Boston residents for the next few months as they undertake a neighborhood-by-neighborhood citywide planning effort, the first comprehensive such vision since the 1960s.
The Vertullo Building houses five small business spaces and four rental apartments. Subsequent to the historic renovation three new businesses are located in the Vertullo Building. Dress With Confidence, where owner Yolanda Sealy tailors and makes custom clothing and sells handmade outfits and jewelry, opened in August 2014.
Sandler LaCoste will open The Private Office Barbershop this month, and Nika Londy will open Intriguing Hair, a hair extension salon, also this month. The two remaining spaces are actively being marketed by Historic Boston Inc. and have several interested parties pursuing them.
?Hyde Park has a rich history, part of which is embodied in this building,? said Historic Boston Inc. Executive Director Kathy Kottaridis. ?HBI?s work restores that the character of the Vertullo Building, but it does so in a way that also makes certain that these are functioning and sustainable assets for today?s business community.?
Other speakers and guests at today?s dedication included Boston City Councilors Timothy McCarthy and Michael Flaherty; Rob Consalvo of the Boston Department of Neighborhood Development; Kathy MacNeil, President of Historic Boston Inc.; Larry Curtis of Winn Development, a member of HBI?s Board of Advisors; Emily Patrick Director of Hyde Park Main Street; Bill Parent, Chief Executive Officer of Blue Hills Bank; Carmela Vertullo Pearce, former owner of the building and still a resident; Pat Tierney of Tierney Real Estate; representatives of the Southwest Boston Community Development Corporation and Boston Preservation Alliance; Board members, staff and donors of Historic Boston Inc.; and business and property owners from throughout Cleary and Logan Squares business districts in Hyde Park.
Historic Boston Inc., a 55-year old preservation developer and real estate advisor, purchased the building in 2011 from Mrs. Pearce, whose family bought the property in 1936 and both lived there throughout the 20th century and operated a cobbler business on the first floor.  Mrs. Pearce, now 82, continues to live in one of the four residential units on the upper floors.
HBI purchased the building as part of its initiative Historic Neighborhood Centers, which was created to bring preservation and real estate development services to projects in Boston?s Main Street districts. The Vertullo Building is a good example of the Second Empire style, popular in the 1860s when Hyde Park was incorporated as a town, and is one of only two such remaining mixed use structures in the Cleary and Logan Squares business district.
Working closely with Hyde Park Main Street, HBI identified the buildings that would most benefit from a focus on preservation improvements and worked with property owners to initiate projects.  In the Hyde Park Main Street district, HBI was also responsible for the new theater sign at the Everett Square (also known as the Pixie) Theatre.
The Vertullo Building?s new appearance restores the building to its 1890s appearance, but the improvements are more than cosmetic.  HBI?s $1.3 million investment includes substantial systems upgrades, which catapulted the building from the mid-20thcentury to the present, making it more energy efficient and responsive to small business needs.
The neighborhood is undergoing significant change and improvement nearby and builds on recent successes in the neighborhood, including the success of the Fairmount Grille across the street.  French?s Opera House, home of the Riverside Theatre Works, has been purchased by a nonprofit group Inspire Us In Music, which plans to expand the use of the venue for performing arts and add a retail component.
Antonio?s Baccaro, an Italian-style restaurant owned by the operators of Roslindale?s popular Sophia?s Grotto, is expected to open in June following significant renovation of a building on Fairmount Avenue.
The Southwest Boston CDC will proceed with its mixed-income housing development at the rear of the Vertullo Building on Nott Street, bringing important foot-traffic to this part of Fairmount Avenue and demonstrating the increasing importance of transit-oriented development ? both housing and commercial ? near Hyde Park?s train stations.
The Vertullo Building now preserves for posterity an early piece of architecture from Hyde Park?s founding years as an independent town, but it also demonstrates the importance of improving and maintaining historic buildings so that they can continue to be well-performing economic assets to neighborhood commercial districts.
The first-floor commercial storefront of Vertullo underwent a complete reconstruction with historically appropriate detailing. The new design increases the display window areas for greater visibility into shops and a more pedestrian-friendly shopping and sidewalk experience.
For the Roxbury-based HBI, the Vertullo project represents the third project in its Trilogy Fund, a $1 million capital campaign that HBI completed last year for this project and two others:  the 1875 Hayden Building in Chinatown, completed in early 2013, and the 1836 Alvah Kittredge House in Roxbury, completed in 2014. The Trilogy Fund, led by developer Ronald Druker and former Mayor Thomas M. Menino, raised $250,000 toward the financing gap on this project.
The Vertullo project employed traditional forms of real estate development financing, with particularly helpful private financing from nearby Blue Hills Bank.  It also utilized the State Historic Tax Credit program at the Massachusetts Historical Commission and received critical support from the City of Boston?sDepartment of Neighborhood Development in the form of a $95,000 loan for the commercial level improvements.
The rehabilitation project was done by contractor M.J. Mawn. The architect for the project was Chris Brown of bArchitecture Studio. Certified Property Management manages the building.
To learn more about the Vertullo Building and HBI?s projects, please visit www.historicboston.org.