Posted at 15:28h in Blog by HBI Administrator

While Historic Boston?s Jeffrey Gonyeau is currently working on projects in the Fields Corner and Hyde Park commercial districts with HBI?s Historic Neighborhood Centers program, Shelby Graham is working her way around the city as the project manager for Neighborhood Field Services, compiling information about historic resources in 17 other neighborhood commercial districts.  With the goal of identifying places whose preservation will contribute to their neighborhood?s economic strength, Shelby also seeks to build relationships with neighborhood representatives and property owners, giving them a link to HBI should they wish to pursue a redevelopment project or need technical support. After a year of this work, HBI has built a lot of good will and support for preservation as a part of Main Street activity in Boston, while creating a valuable database of pivotal historic commercial buildings in Boston?s neighborhood commercial centers. This will be useful to policy makers, property owners, local organizations and city-wide preservation leaders going forward. 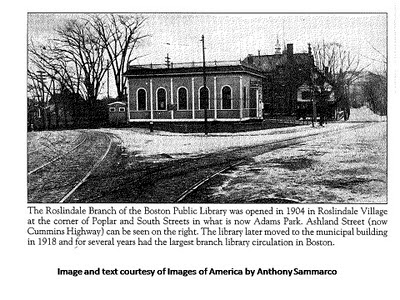 Roslindale, once part of Roxbury (and then part of West Roxbury when it formed its own government in 1851), was a rural village until the late 19th century, when improved transportation routes made it more accessible to Boston. Much of the district?s development happened in the years between 1890 and 1930, and several of the buildings that were part of that era remain today. In 1917, the area that is now Adams Park was cleared of buildings (including the village?s library), which created a visual center for the district. During that period, Roslindale was a bustling commercial center of the southwestern section of Boston and became a magnet for residential growth in the surrounding neighborhoods. 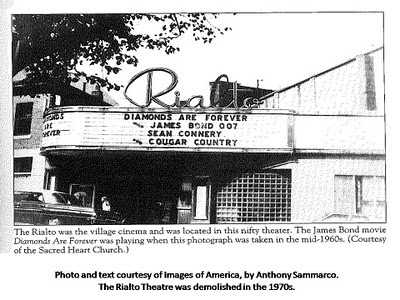 However, like many urban neighborhoods, Roslindale began to suffer from hard times. In 1968, the suburban shopping mall was introduced in nearby Dedham, and several grocery stores with large parking lots were built. The small neighborhood commercial district no longer seemed relevant as more and more people took to their cars and shopped outside of the area. Paired with the general migration of the white middle class to the suburbs and 1974?s busing laws, the commercial district, (and to some extent, the adjacent residential areas) fell into a state of decline. In the 1970s, businesses suffered through arson fires, crime, and general neglect. By the 1980s, the area was challenged by increasingly deteriorated building stock, empty storefronts, and vast disinvestment.

In 1985, then City Councilor Thomas M. Menino brought the National Trust for Historic Preservation?s Main Street Program to Roslindale, establishing one of the first urban Main Street districts in the nation. Through technical assistance and small grants from the city, the new Roslindale Village Main Street program assisted with 33 fa?ade projects, 43 commercial building rehabilitations, 29 net new businesses, and 132 net job gains-totaling over $5 million in new investments by 1990. While there were other forces at play, it is safe to say that the volunteer-driven Roslindale Village Main Streets program triggered considerable positive change in the business district that has continued to this day.

Today, Roslindale is known as a vibrant commercial district with several small local businesses, including several food markets, bakeries, and restaurants. While Roslindale has seen a lot of growth and a great deal of improvement over the past 25 years, there is always more to be done and more to learn. Check back later this week to learn more about Historic Boston?s findings in Roslindale Village. We want your feedback!