Posted at 14:36h in Blog by HBI Administrator
The graveyard next to the Eustis Street Fire House, the building that will soon be Historic Boston?s new headquarters, is undergoing an extensive conservation effort to restore and preserve its remarkable and historically significant markers. Initial conservation efforts were made in 1989 through a project that Historic Boston helped fund to restore about 100 broken tombstones. This current project is a more involved in effort. In this guest post, Josh Craine, conservator of sculpture and co-president of Daedalus Inc., explains the work. 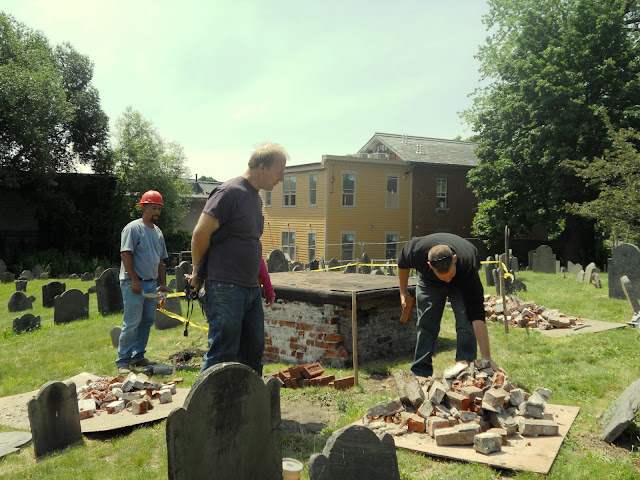 The Eliot Burying Ground, also known as the Old Roxbury Burying Ground, was founded in 1630, and is one of the oldest burying grounds in Boston. Hundreds of slate grave markers as well as a number of table top and vaulted tombs, small monuments and obelisks adorn the burying ground with images of angels, hourglasses, floral and geometric patterns, intricate lettering and unique prose. These hand carved markers are some of the earliest pieces of art that people of European descent produced in the new world.
We are currently in the process of conserving and restoring the table top tombs, the vaulted tombs and the small obelisks and monuments that mark the graves of some Roxbury?s most prominent citizens of the 17th and 18th century. 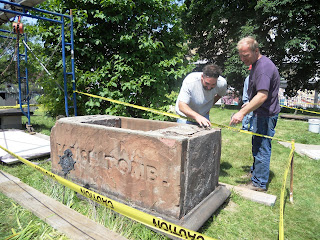 The most prominent tomb structure is the ?Parish Tomb,? the final resting place of the ministers of the First Church of Roxbury in Eliot Square, including John Eliot, the ?Apostle to the Indians.? Nearby, two Colonial Massachusetts Governors, Thomas and Joseph Dudley, and Chief Justice Paul Dudley of the Massachusetts Superior Court, are buried in the Dudley family tomb. The tomb markers and obelisks are made from variety of stones including brownstone, slate and marble. The bases and vaults are made from brick, mortar and stucco.
The over-riding methodology for treatments of these markers is to preserve and stabilize the original materials and carved details. Over the past 200-300 years, there has been extensive damage and deterioration to the surface of many of the stones. This damage has been caused by numerous environmental factors such as harsh New England winters, hot New England summers, acid rain and snow, insects burrowing and biological growth from the surrounding flora and fauna. Other factors such as vandalism and the manner in which the stones were cut, cured and placed have also contributed to their current condition.

To achieve the goals of stabilizing the markers, the brownstone, marble and slate is being cleaned of biological growths and accumulated dirt and soiling. Delaminating (or flaking) areas are being re-adhered using epoxies and acrylic adhesives injected between the bedding planes, small cracks and fissures. Open seams and voids are being packed and filled with natural and polymer modified mortars specifically designed for use on historic objects. These techniques are used to keep water from infiltrating and pooling in the damaged areas, which in turn limits the possibility of the freeze-thaw cycling that damages historic stone structures and objects.

In some cases, broken sections are being re-attached with stainless steel pins and epoxy. Some of th 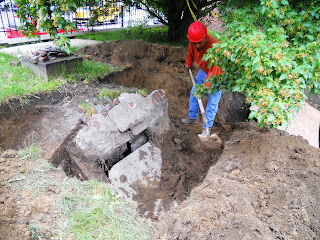 e marble elements are being consolidated with a stone consolidant that allows for the passing of water vapors from the substrate to the surface. These techniques are used to strengthen the most degraded stones.

The brick vaulted tombs and tomb bases, which were early 20th century replacements of the original brownstone, are being stabilized and re-pointed as needed. Damaged bricks are being removed and replaced so the bases can continue to support the markers above. The vaulted tombs are being re-built with brick while attempting to integrate the original materials.
In some cases, the conservation treatments performed are obvious to layman. In others, the work is much less noticeable. Regardless, the goal is to protect the original hand of the artists and stone workers who spent great time and effort to commemorate the lives of the people buried below. It is the aim of these treatments to ensure that their skilled work and the stories of the people they commemorated can be enjoyed, studied and appreciated by future generations.
The treatments are being performed by Daedalus Inc. Sculpture and Monument Conservators of Watertown, and Folan Construction of Easton. The project is being overseen by Kelly Thomas of the Historic Burying Ground Initiative and Ivan Myjer of Buildings and Monuments Conservation of Arlington. 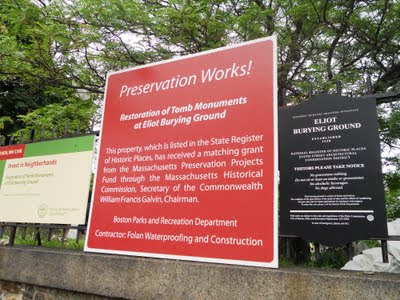