Posted at 08:30h in Blog by HBI Administrator 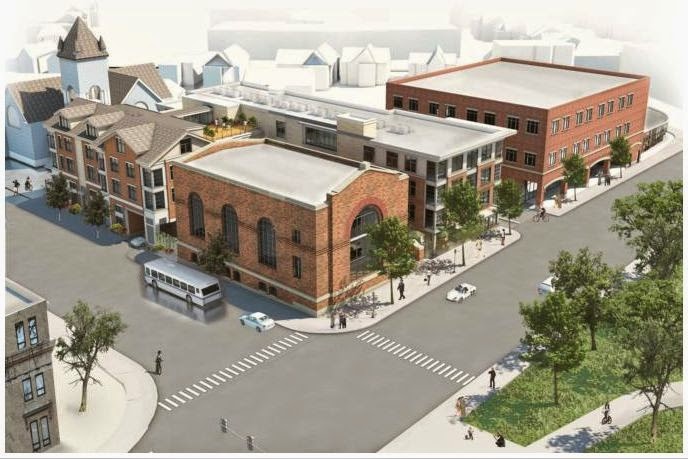 Writer Matthew J. Kiefer is President of HBI and a partner at law firm of Goulston and Storrs.

You sometimes find treasure in unlikely places.  An electric substation is not the first place you?d ordinarily look to help redefine a neighborhood, but the Roslindale Substation is special.  From the first time our board and staff walked through its monumental bronze doors into the industrial cathedral within, we couldn?t stop thinking about how to re-purpose this remarkable piece of orphaned infrastructure.

Electric trolleys transformed Roslindale from a rural village into a streetcar suburb after it was incorporated into the City of Boston in 1873.  Just as streetcars made Roslindale possible, electricity made streetcars possible.  The Roslindale Substation was one of several built by an MBTA ancestor to house equipment that converted alternating current into direct current to run the trains.

Designed by a prominent architect, Robert Peabody of Peabody and Stearns, and built in 1911, the Substation reflected the pride Bostonians took in the new machines and technology?sewer pump stations and waterworks are other examples?that helped turn a cluster of country towns into a manufacturing metropolis.

The Substation operated for 60 years until decommissioned by the MBTA in 1971.  Since then, it has sat empty, inhabited only by pigeons and the occasional homeless saxophone player.  Now it?s on a path to be transformed into a neighborhood asset again?this time, a restaurant and retail space that will activate Roslindale Village and anchor a residential development next door.

Besides patience and persistence, another Historic Boston hallmark is versatility.  While we often play the role of direct developer, here we?ve been the quiet catalyst, gestating an unusual partnership that nurtured the project to feasibility.  We joined with Roslindale Village Main Streets, a kindred non-profit that shared our aim to re-enliven the Substation, to put the pieces in place to win the designation from the Boston Redevelopment Authority to redevelop it.

We soon concluded that a stand-alone redevelopment of the Substation was financially infeasible.  While the logical response to a too-expensive project is to subtract something, in this case the breakthrough was to add something?the adjacent Higgins Funeral Home.  Once this property became available, we saw the opportunity to marry the Substation to a choice development site to lift both boats.  We recruited the Peregrine Group, who have a particular gift for historic mill conversions, as a partner.

Members of this unusual public/private non-profit/private for-profit partnership stood together at a podium in Roslindale recently for a celebratory ground-breaking.  Mayor Walsh spoke eloquently about the vibrancy of Roslindale Village, the dedication of its residents, the role of historic resources in helping neighborhood commercial districts thrive, and HBI?s role in positioning this project for success.  For our part, we?re delighted the project is underway.

Now comes the second part of HBI?s catalyst role.  In 2015, Peregrine will complete 43 apartments next door and the Substation will become a 125-seat destination restaurant.  Retail stores will line Washington Street.  This piece of industrial detritus will have catalyzed the redevelopment of the most prominent site in Roslindale Village, which will in turn catalyze investment by new residents, merchants and others as Roslindale Village continues its upward arc.

I?m looking forward to walking through those monumental bronze doors again.  This time, instead of someone warning me to avoid the pigeon droppings, I expect the first words I?ll hear will be: ?do you have a reservation??