How Do I Revive Thee? Let Me Count the Ways

Posted at 15:15h in Blog by HBI Administrator 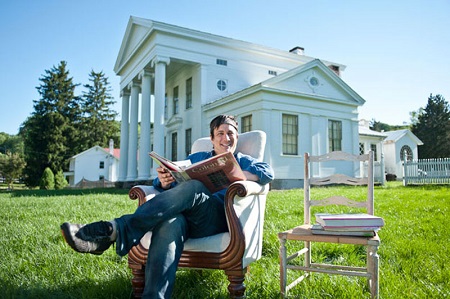 HBI is pleased to present the next installment in actor, and Greek Revival enthusiast, Bronson Pinchot’s blog series. It is clear from this and his last post that Pinchot is a passionate lover of Greek Revival architecture, and an outspoken advocate for its restoration. His work is not restricted to advocacy, however. He is currently the host of the DIY Network show, The Bronson Pinchot Project, and he is preparing to launch another show, Bronson Pinchot Saves America. In this newest show, Pinchot will be called in to document and repurpose buildings that are too far gone to be restored. Stay tuned for an air date sometime this summer. Until then, enjoy his next installment on the HBI blog. 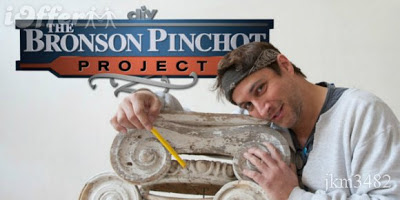 Why I Love the Greek Revival, Part II

By Bronson Pinchot
I did state at the end of Part I that I would address color on Greek Revival buildings, and I lied abjectly. It?s a pusillanimous little topic, best left to pedants peeking out of their wrinkle-free curtains.
Here is something much more worthy:
Ancient Greek art reached its apogee in the middle of the fifth century before Christ. Subtle refinements and experiments were introduced through the fourth century. In the third and second centuries forays into emotion and contortion in sculpture–and attenuation and decoration in architecture–nudged things into the baroque.
In the second going into the first centuries, when everything had gotten about as out of hand as it could possibly get–think of the very unhappy bearded fellow and his sons all knotted up in serpents (the Laocoon)–when all that turbulent water was under the bridge, there was a little backlash,
an attempt to return to the sobriety of the classical. We might think of this as the first Greek Revival.
In the second century A. D. under the Emperor Hadrian, who was a lover of all things Greek, there was a second Greek Revival.
The next conscious revival in the West of classicism was the Italian Renaissance, which should be noted as Greek Revival number three.
The Adam period in England, sidling into the Directoire period in France is the fourth Greek Revival.
The movement in Scotland, Germany, England and of course America that we now all call ?the? Greek Revival is actually the fifth Greek Revival.
Around the time of the First World War there was a revival of Greek Revival which is maddeningly known as the Colonial Revival. I sometimes call it Revival-Revival but it is actually the sixth Greek Revival.
The use of ultra simplified classical forms in the 1980?s will probably some day count as the seventh Greek Revival although I hope I?m dead when that occurs.
The amateur archaeologist Heinrich Schliemann went to western Turkey in the 19th century to find Homer?s Troy and found a small pile of Troys. I believe the Troy thought to correspond to Homer?s is #VII A.
I bought a bookstand in England once which the dealer described as ?Georgian.? This little episode illustrates what happens when we aren’t rigorous about our periods.  We typically take “Georgian” to mean 18th century, specifically third quarter of the 18th century, when George III was taxing our stamps and our patience. On the way home from this seller of bookstands I began to suspect the bookstand was 20th century. ?I think? said an English antique dealer friend who was riding in the car with me ?you?re right. But that would make it George V, and he?s still a George, you know.?
Expensive lesson learned.

Really we should count our Georges. George I is very early 18th century, George II is second quarter of the 18th century, George III is the George we usually mean when we say ?Georgian.? His son, George, who ruled during his madness, was not king but regent, and so the lovely stuff going into the early 19th century is Regency. Only in the 1820?s when it gets a bit chunky does anyone call it George IV. For five minutes his brother William ruled, and though there is scarcely any discernible difference between something from 1830 and 1835, we get William IV. Victoria ascended the throne in 1837. I always have to smile when people distinguish between Greek Revival, which they feel (correctly) is sober and majestic, Victorian, which they feel (usually correctly) is dripping with gingerbread, because some of our very finest Greek Revivals are, judging from the calendar, actually ‘Victorian.’ By which I mean, they were built in the latter 1830?s and early 1840?s when Victoria was newly but firmly on the throne.

What does all this mean? I have no idea, but it was awfully fun to get out of my system.