Posted at 14:49h in Blog by HBI Administrator 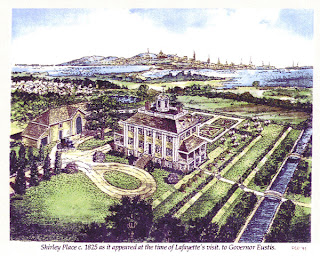 The Shirley-Eustis House Announces Lecture on Thursday, February 21, 2012
?On the Road to Boston:  Remembering Historic Structures in Roxbury?
BOSTON, Mass. ? The Shirley-Eustis House, a National Historic Landmark house museum and carriage house at 33 Shirley Street in Boston, Massachusetts announces a lecture to be held at Shirley Place Mansion on Thursday, February 21, 2012 at 6:00 p.m.
Gillian Lang of Historic Boston Incorporated (HBI) will explore the plot of land at the corner of Washington Street and Eustis Street.  This small patch offers a fascinating vantage point from which to view the history of Roxbury and it?s progression from Colonial outpost to an industrialized sub-sect of Boston.  Ms. Lang will examine the structures that have inhabited the southern-most corner of the plot including the Eustis Street Fire Station.  The evolution of these buildings mirrors the larger changes that were taking place in the 17th– and 18th-centuries.
HBI is a historic preservation organization located in Dudley Square in Roxbury, where they inhabit Roxbury?s oldest fire house on Eustis Street.  Historic Boston Incorporated redevelops historic properties to make urban neighborhoods thrive by reusing old places to meet current needs ? which enriches our communities and restores neighborhood pride.
This lecture is free and open to the public.  A $5.00 donation is suggested.  Refreshments will be served following the discussion.  To reserve your seat, please call 617-442-2275 or email governorshirley@gmail.com.
The Shirley-Eustis House, built by Massachusetts Royal Governor William Shirley in 1747 and later the home of Democratic-Republican Governor William Eustis in 1819 is located on 33 Shirley Street in Boston, Massachusetts.