Posted at 13:15h in Blog by HBI Administrator 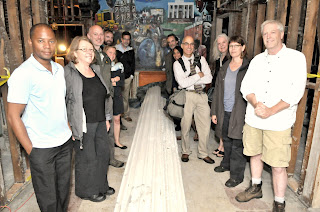 Historic Boston is very pleased and honored to announce that it has been awarded a $100,000 grant from the Lynch Foundation to support preservation of the 1836 Alvah Kittredge House, one of three preservation projects of HBI?s Trilogy Fund capital campaign.

The Lynch Foundation?s support will particularly focus on restoration and re-creation of the distinctively Greek Revival Period features of the Kittredge House, including the fluted columns, the scrolled Ionic column capitals, and the triple hung wooden window sash.   The Kittredge House rehabilitation, which began in June 2013, will restore the long-empty building to its early 19th century glory, when the structure was the focal point of a rural estate.  Today, the house on Linwood Street faces the newly renovated Alvah Kittredge Park and is part of a much larger and denser residential neighborhood.  Once completed, the house will be five apartments, two of which will be designated at Affordable rental rates.  The Kittredge House?s restoration will be completed in June of 2014.

The Lynch Foundation, established in 1988 by Carolyn and Peter Lynch, provides support for many Massachusetts non-profit organizations and includes historic preservation as one of its priority funding program areas.   HBI is pleased to note that the Lynch Foundation?s support for this project brings The Trilogy Fund, HBI?s $1 million capital campaign total to $900,000.

To make a donation to HBI?s Trilogy Fund, please call Kathy Kottaridis at 617-442-1859 or visit http://www.historicboston.org/general/donate/.