Posted at 13:21h in Blog by HBI Administrator

In his Autobiography, this is how Malcolm X referred to his half-sister, Ella Little Collins:

I think the major impact of Ella?s arrival [in Lansing], at least upon me, was that she was the first really proud black woman I had ever seen in my life.  She was plainly proud of her very dark skin.  This was unheard of among Negroes in those days, especially in Lansing.
If Martin Luther King Day honors equality and civil rights, we are sharing a story from Rodnell Collin?s 1997 book, Seventh Child, about his mother?s struggle to purchase the future Boston Landmark at 72 Dale Street.  It is a reminder of an imperfect time in Boston and Roxbury, but it teaches us that our preservation work today must also interpret some challenging back stories.

Ma?s [Ella Little Collins] resourcefulness and determination were also exhibited when she outsmarted a bigoted white family who didn?t want to sell her the property at 72 Dale Street.  She didn?t run to a civil-rights organization seeking help.  ?I always kept an ace in the hole for such people,? she said.  She checked at the bank and found that all the family wanted for the property was five hundred dollars cash and payment of overdue real estate taxes.  After checking with Mr. Gordon, a Jewish realtor who had schooled her in the process of purchasing property threatened with bank foreclosure, and Mr. Charlie Roundtree, a black realtor whom she trusted, Ma once again approached the family and offered them six hundred dollars cash and payment of the overdue taxes.  They wouldn?t even show her the house. 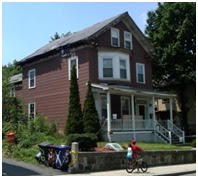