Posted at 09:05h in Blog by HBI Administrator 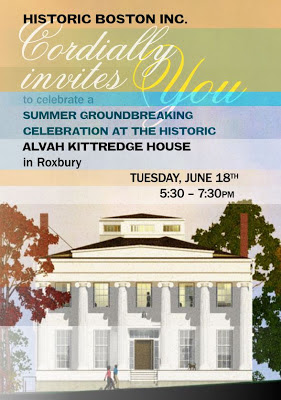 Mark Tuesday, June 18th in your calendar and join HBI, Mayor Menino, and the Highland Park Community for groundbreaking ceremonies at the historic Alvah Kittredge House at 10 Linwood Street in Roxbury.  Festivities get underway at 5:30 p.m. followed by a neighborhood barbeque until 7:30 p.m.
A property that has been abandoned for more than 20 years, the Kittredge House is one of the oldest homes in Highland Park and one of a handful of high-style Greek Revival Period houses remaining in the city of Boston.  Once part of a large rural estate built in 1836 by Roxbury alderman and Eliot Congregational Church deacon, Alvah Kittredge, the house later became home of prolific architect Nathaniel Bradlee until the 1890s.  The house was moved in the early 20th century to make way for greater housing construction, and in the 1970s became headquarters for Roxbury Action Program, and African-American advancement organization.
HBI acquired the building in 2011 and plans a full preservation-based redevelopment project that will result in five housing units that will be available for rent in early 2014.  Construction starts in June and will be completed in February 2014.
We hope you will join us to launch the re-emergence of this beautiful building and the creation of new housing for Roxbury.  Please email hbi@historicboston.org to RSVP.