Posted at 08:24h in Blog by HBI Administrator 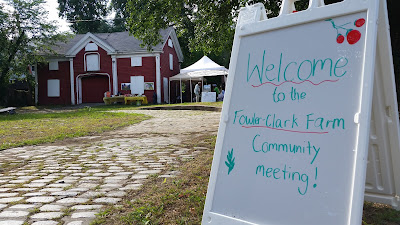 Last week Historic Boston Inc., along with The Urban Farming Institute(UFI) and The Trust for Public Land (TPL) invited friends and neighbors of the Fowler Clark Epstein Farm to a community cookout and conversation in Mattapan. It was a gorgeous summer evening and an atmosphere of excitement and curiosity about the property paired with the familiar aroma of a summer barbecue wafting down Norfolk Street helped to draw a crowd of over 100 neighbors and friends.
Food was provided by the Urban Farming Institute, whose mission is to “contribute to healthy people and sustainable cities by promoting and creating self-sustaining urban farming enterprises and farming jobs.” Beyond the staples of hot dogs and hamburgers (and veggie burgers), UFI provided farm fresh salads and side dishes from potatoes, beets, greens and other produce from their urban farm sites.

Earlier this summer Historic Boston announced its plans to acquire the 1786 Fowler Clark Farm, a designated Boston landmark in Mattapan. Together HBI, UFI and TPL hosted this cookout to provide a space for members of the Mattapan community to gather and discuss the farm’s future. As many of the long-time neighborhood residents trickled in, they shared their memories and stories of the Fowler Clark farm and their last tenants, the Epstein family.

Toward the latter part of the event, UFI Executive Director, Pat Spence gathered everyone to discuss preservation of the Fowler-Clark-Epstein farm and op ened up a conversation about possibilities for its future as the new home for UFI . Many of those in attendance expressed excitement about restoring the site’s house and barn, and a desire to volunteer and become more involved in the project. Others raised hopes that it would have public access and be a resource to the surrounding community.
HBI, UFI and TPL were delighted by the community’s interest in the future of the site and hope that a plan that includes urban farming and preservation can together energize and re-activate the Fowler Clark Epstein Farm.

Check out more pictures from the event on flickr!