Posted at 17:05h in Blog by HBI Administrator 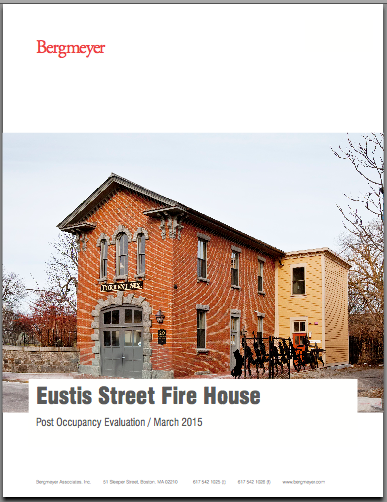 Dee Spiro is Director of Sustainability at Bergmeyer Associates Inc. in Boston. She led the Eustis Street Fire House?s final certification for obtaining LEED Silver certification in 2013. Bergmeyer released a report on energy usage in the 3 years since occupancy this week.
When Bergmeyer Associates, Inc., as architect for the rehabilitation of the historic Eustis Street Fire House, completed the LEED Silver certified project in 2011 we knew that the building was a singular project and that Historic Boston Incorporated (HBI) was a rare type of client. What we didn?t know then, however, was that HBI and the Fire House would also provide us with our first post occupancy evaluation (POE) opportunity.
In 2014, Bergmeyer launched a POE pilot program and was looking for clients who would let us to track their energy and water use data in order to help us to evaluate the effectiveness of projects? design elements and sustainable strategies. With two full years of operational data, the Fire House was an ideal candidate. We used the WegoWise software platform to analyze data for the entire building and for each tenant individually.
We found that the actual Baseline Year building energy use was only 3% higher than the LEED energy model prediction and 5% less than that of similar buildings in the New England census region. Overall building energy use increased by approximately 10% during Year 2. While gas use held fairly steady between the Baseline Year and Year 2, increasing by only 4%, electricity use was up 14%.
The tenant-to-owner analysis found that the tenant used more than twice as much gas as HBI during the Baseline Year and more than three times as much during Year 2. Electricity use between the two offices was very similar, with HBI using approximately 1,500 kWh more than the tenant during the Baseline Year. During Year 2, both HBI and tenant electricity use increased, resulting in a difference of only 71 kWh between the two offices.
In terms of potable water use, utility bills indicate that there was an approximately 8% decrease in the amount of water used between the Baseline Year and Year 2. However, the Boston Water and Sewer Commission did some work in the area and had to disconnect the building from the water supply and connect them to a fire hydrant for water service. Most likely, without the interruption in service, the amount of potable water used would have remained fairly consistent between the Baseline Year and Year 2.
Our analysis of the energy and water use at the Eustis Street Fire House provided us with excellent data that we can use to improve the operational efficiency of the building. The finding that most surprised us was the enormous disparity in gas use between HBI and the tenant. As the utility bills indicate there was no gas used during the summer months, we knew that a leak wasn?t the culprit. Our recommendation was that HBI make the tenant aware of the issue and that they explore whether the thermostat setpoints had been overridden at some point in time as it was possible the system was not operating as originally programmed. Continued tracking will help identify energy and water use trends and make us aware early on of any issues so that we can investigate and address them.
Read the Post Occupancy Evaluation