Progress at the Malcolm X House

Posted at 14:06h in Blog by HBI Administrator 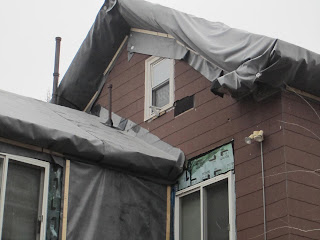 Many strands of HBI?s efforts at the Malcolm X/Ella Little Collins House in Roxbury came together this week.  We signed an 18-month agreement with the owner, Rodnell Collins, for exclusive representation of his interests in identifying a feasible and sustainable way to rehabilitate the house, and in identifying future users and the funding to carry out necessary repairs.
We also received exciting news from the 1772 Foundation in Connecticut that HBI was awarded a grant of $50,000 to support project planning and capital investment.  This is the first grant to HBI for this site where we expect full rehabilitation and re-activation will require between $500,000 and $750,000 to complete.   We are so grateful for this wonderful news from a foundation that is both interested in African-American historic places and bricks and mortar preservation. 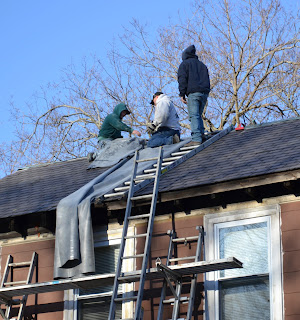 But nothing is more thrilling than actual construction, however large or small.  And this week, Olde Mohawk Masonry and Restoration carried out stabilization work on the house, covering the entire roof and eaves with a rubber membrane to prevent further water penetration, and exposed clapboards and door and window surrounds were covered.  These interventions should buy some time to plan the full project and raise the necessary funds to complete this project.
You may recall that this house on Dale Street in Roxbury, which dates to 1872, was bought in 1941 by the civil rights leader?s mentor and half-sister, Ella Little Collins, who brought the young Malcolm Little to Roxbury that year from a foster care home in Michigan.  It is the only extant residence of Malcolm X from his developmental period, before he went to jail and experienced his transformation to Islam.  It is a place where he frequently stayed during visits and organizing work in Boston until his death.  The house has been in serious disrepair since the 1980s, although it was designated a Boston Landmark by the City of Boston in 1998.
So, with the house stabilized against the weather, authority to act on behalf of the owner, and funds to begin, HBI is heating up a serious effort to restore this landmark and re-activate it for educational purposes.