Posted at 17:48h in Blog by HBI Administrator 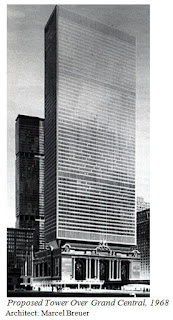 Our guest blogger this week is Kate Gilmore, HBI intern and student at Columbia’s Graduate School of Architecture, Planning and Preservation. Kate has done extensive research on air rights and how they play into the preservation of architecture.
In 1968, the owners of Grand Central Station proposed to construct a fifty-five story tower in the space above the historic train station. Having recently lost Penn Station, the public was alarmed by the prospect of compromising the City?s remaining historic train station. The New York City Landmarks Preservation Commission found that the proposed tower?s massing would overwhelm the smaller landmark and called the proposal an ?aesthetic joke.?  However, the owners of Grand Central were simply exercising their right as private property owners to develop their lot to the highest and best use, thus, maximizing their economic return.

Maximizing highest and best use entails fully developing a lot?s air rights, which are an invisible three-dimensional envelope of space that a building can occupy as dictated by Floor Area Ratio (FAR). A building not built to its maximum FAR has remaining undeveloped air rights, which are a valuable and limited commodity. Many of New York City?s individual landmarks, such as the iconic Grand Central Station, are built well below their maximum FAR and face intense development pressure.

Responding to the proposed tower over Grand Central, in 1968, the Department of City Planning adopted ZR?74-79 Zoning Resolution allowing landmark property owners to transfer their air rights in order to mitigate the financial burden of owning a landmark property, while still preserving the historic resource. Landmark property owners could sell their air rights to an adjacent lot including a lot across the street or in the case of a corner lot any of the other corner lots on the intersection.  Grand Central used ZR?74-79 to transfer approximately 75,000 sq. ft. of air rights to the Phillip Morris Building at 120 Park Avenue.  ZR?74-79 was perceived to be a win-win– a landmark property owner could extract economic value from their undeveloped air rights while still maintaining the integrity of the historic resource. 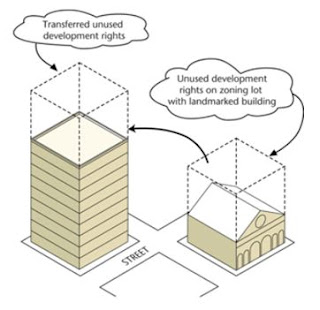 The ability to transfer air rights was considered an innovative planning tool that could satisfy the economic concerns of the landmark owner, insure the protection of neighborhood character, and protect the historic resource. However, since the Zoning Resolution?s adoption, less than a dozen transfers have occurred. Grand Central continues to hold over one million sq. ft. of unused air rights. In August 2012, the New York City New York?s Department of City Planning announced their proposal to rezone east midtown. In order to facilitate the transfer of Grand Central?s remaining air rights and spur construction of new Class A office space. The proposal has led to outcry from other individual landmark buildings in midtown including St. Patrick?s Cathedral, St. Bartholomew?s Church and Central Synagogue, who are all lobbying the city to be included in the new landmark transfer program.  Many individual landmarks throughout the five boroughs continue to hold a large quantity of unused air rights. The Midtown East Rezoning is one further step towards resolving the issue of how best to protect historic resources while still insuring that property owners don?t unfairly shoulder the economic burden of landmark ownership. 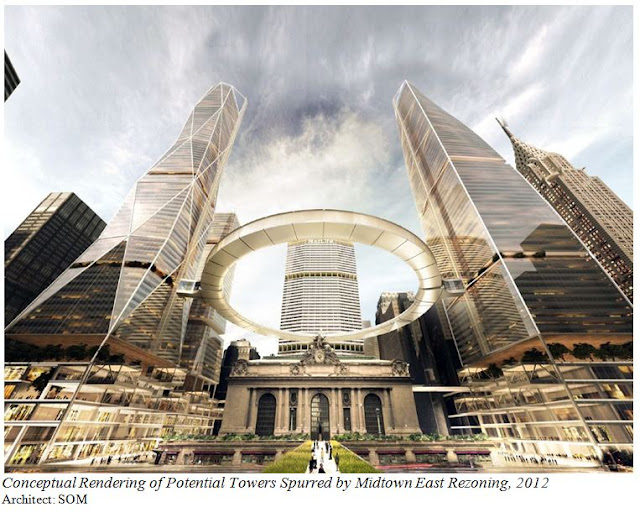