Posted at 09:47h in Blog by HBI Administrator

Guest Blogger Jennifer Gilbert is a Boston area development consultant as part of VIVA Consulting and has taught Historic Preservation Law and Finance at the Boston Architectural College.

Dusting off a shelf one afternoon, I happened on a neglected copy of the Boston Society of Architects? Guide to Boston, dated 1970.  The yellowing pages fell open to a chapter entitled ?Roxbury/Washington Park,? and I flipped through photos of rubble-strewn lots, walls spray-painted with ?All Power to the People,? and a host of then-new mid-century architecture, all still-standing buildings I?d walked or driven by scores of times.  With only a little digging into the history and a morning touring a few of the sites, I have come to believe these are overlooked pieces not only of Boston?s architectural heritage but also its complex urban history.  As the buildings approach the 50-year mark and Boston considers extension of the Urban Renewal Plan which created them, it?s time to consider both architecture and history more closely.
If you aren?t familiar with these ?Roxbury Moderns,? among the easier-to-spot examples are: 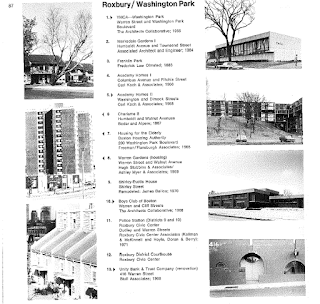 The buildings further share urban history as products of the Washington Park Urban Renewal Plan, authorized by Boston City Council in 1963.  They thus carry a history beyond the architecture, and one Boston is not alone in not having fully processed.  This shared heritage makes them all the more intriguing and all the more important, indeed in the words of the National Register, all the more significant.

As a final twist, several of the Roxbury Moderns are among Boston?s largest affordable housing resources.  Academy, Westminster, Charlame and Warren Gardens were specifically built for that purpose as part of the Washington Park Urban Renewal Plan which included a goal of creating 2000 units of affordable housing.   With different ownership and different ownership structures, all remain income-restricted today.  This means they should be valued as functional buildings and very much as people?s homes.  Any attempt to preserve them or capture the architectural and urban history needs sensitivity acknowledging their residents and the important public purpose the buildings serve.   Too often, historic preservation and affordable housing clash, with one good pit against the other, and at a loss to both.

Let?s hope the discussion of preserving modern buildings in Boston will broaden to embrace these neighborhood examples.  Could the Roxbury Moderns form a multiple property listing on the National Register along the lines of Connecticut?s effort with its mid-century residences?  How about a Roxbury Urban History Tour on Urban Renewal with multiple narratives illustrating its subtleties? Might we see Docomomo Tour Day 2016 in Roxbury (DocoRoMo)?  Historic Boston, Inc. and I welcome your ideas.

The Roxbury Moderns reflect an era of design that did not leave many traces in Boston proper, even within the downtown core, and even fewer which are residential.  More importantly, perhaps readers of this blog will take the opportunity to look again at the Roxbury Moderns?as they near the 50-year mark– and consider how we cast their complex story, one that is not 100% positive nor 100% negative, and thus all the more urban and all the more historic.