Posted at 12:44h in Blog by HBI Administrator 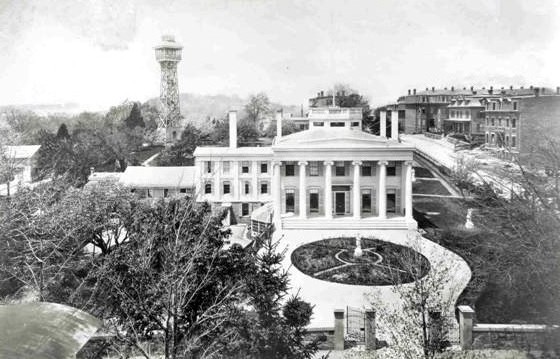 Our guest blogger this week is restoration carpenter, Bill Rainford. Bill is an esteemed alumnus of the North Bennet Street School’s Preservation Carpentry Program, and the owner of Rainford Restorations. Recently he wrote an article for FineHomebuilding about his experience reproducing moldings from the Alvah Kittredge House in Roxbury and shares some of that experience with us. Enjoy!

The Alvah Kittredge House in Roxbury Massachusetts is a great example of high style Greek Revival architecture in Boston and a tangible link to the city and the nation’s early history.

The Greek Revival Style was most popular in the United States during the second quarter of the 19th century. (Approximately 1820-1850) During this time period the population and economy was also growing by leaps and bounds. The United States was still a young nation and many folks wanted to show off their new found affluence.  During this period of great optimism there was a strong belief in the American Democracy and many associated the ideals of the new nation with those of early Greek Democracy. Around this time, access to Greece and the designs of antiquity were also coming into the mainstream as influential citizens like Thomas Jefferson read books like ‘The Antiquities of Athens‘, Benjamin Latrobe and others built out Hellenistic monuments and public buildings in Washington D.C. and other large east coast cities, and builder’s guides like Asher Benjamin’s ‘The Practical House Carpenter’ proliferated the tool chests of local joiners and carpenters. Given this atmosphere many folks wanted to have their own building look like a Greek temple. For most of the ‘middling’ Americans, especially those in more rural and western locales the scale and details would be simplified down to keeping classical proportions and greatly simplifying details to meet their budgets — pilasters instead of columns, simplified moldings or even flat boards attempting to echo the pediment and other design elements of a Greek temple.

In places with money — like public buildings and mansions — the builders could afford to go big with design elements like a colonnaded portico and carved relief details in the pediment etc. The Alvah Kittredge house is a great example of a high style Greek revival home which reflected the wealth of its original owner, and of Boston and the US in general at that time.  Not only is the house unusual given how the city has grown up around this once grand country estate, but the scale of the front facade needs to be seen in person to be properly appreciated. The two story portico with its large double hung windows and high ceilings required wide and detailed moldings in order to be the appropriate scale for such a magnificent home.
This 8 inch wide molding was made by hand using traditional wooden molding planes likely on site and from eastern white pine. This is not the sort of thing you can buy at a local big box store, or millworks supply company. The best way to replicate this sort of casing is to make it from the same materials and in the same manner as the original joiner….
I started by capturing the molding profile via molding comb or profile gauge which aids in transferring the profile to the newly prepared stock.
Next by using traditional wooden molding planes I carefully set in all the major transitions in the profile
Many of these planes I use date back to the time period when the Kittredge house was actually built and yields results that simply cannot be duplicated by machine. The original handwork had variations and facets which catch the light differently when compared to stock that is milled by a machine.
The end result is a near identical match that will help insure that future generations living in the Kittredge house will be able to enjoy it’s many details in much the same way as Alvah did when the house was first built.

If you’d like to learn more about how to make traditional moldings, please check out the related article ‘Master Carpenter Series:Traditional Molding’ I wrote for FineHomebuilding which can be found here  (There is also a related video series which you can find on www.finehomebuilding.com/extrasfor the Sept 2013 issue)