Roxbury: Back to the Future of Economic Re-development – Part 1

Posted at 08:44h in Blog by HBI Administrator 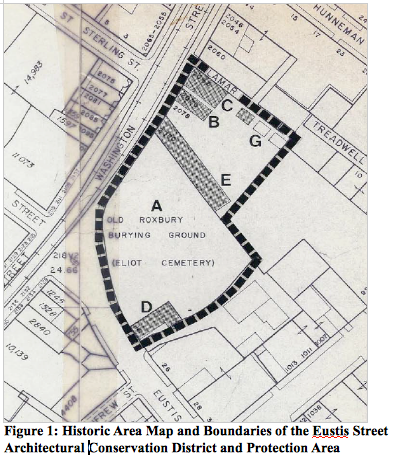 HBI?s Jeff Morgan synthesizes the history of Roxbury Neck to help inform the direction in which new Roxbury developments may shape the future of the neighborhood.
Since HBI redeveloped the Eustis Street Fire House in Roxbury for its new home in 2011, there has been increased attention on the overall redevelopment interests in the Dudley Square, Roxbury area. The redevelopment of the Ferdinand Building as part of the recently dedicated Bruce C. Bolling Municipal Building, now home and headquarters for the Boston Public Schools, and the recently opened new Tropical Foods grocery store are just part of the recent cycle of development activity in Dudley Square and the Eustis Street Area with much more anticipated in the near future.
The history of Roxbury Neck and the evolution of Lower Roxbury will inform new development in Dudley Square and Roxbury. As HBI monitors the future potential for additional redevelopment including the Owen Nawn Factory and Parcel 8, we would be remiss in not pausing to consider the history of the Eustis Street Area and the many periods in Roxbury?s economic and land development history. Much has been written about this history which is rich, extensive, and significant. The following background will set the context and will be posted to the HBI blog in three parts over the course of the next few weeks. Enjoy.
Eustis Street Architectural Conservation District and Protection Area
By way of context, the Eustis Street Area of Roxbury is a designated Architectural Conservation District. It is centered around the Old Roxbury Burying Ground (present day John Eliot Burying Ground) and includes the Josiah Cunningham House, the Jesse Doggett House, the Eustis Street Fire House, and the Owen Nawn Factory (Figure 1). The boundaries of the District are roughly Washington and Eustis Streets, Harrison Avenue and Melnea Cass Boulevard.
The District is a unique collection of sites and structures which represents the post-Revolutionary history of Roxbury’s commercial and industrial development — a continuous history of Roxbury from its origins as a farming village through nineteenth century industrialization.
To understand that significance let us glimpse back into a bit of the history of is development. 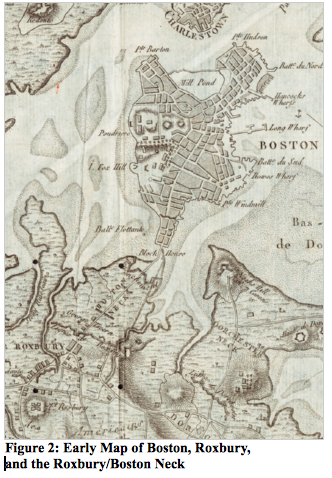 Early Roxbury before the Revolutionary War
In 1630 six villages were founded by the Massachusetts Bay Colony: Boston, Charlestown, Watertown, Medford, Dorchester and Roxbury. The last five were settled by a group of Puritan immigrants who arrived with Thomas Dudley including William Pynchon (popularly credited with founding Roxbury), Thomas Lamb, George Alcock and others. The official date of Roxbury?s settlement is considered to be September 28, 1630 when the third Court of Assistants levied a part of the general tax of 50 pounds on the town. Roxbury became the sixth town incorporated in Massachusetts and was included in Suffolk County during this time period.
Roxbury was connected to the Shawmut Peninsula (present-day Boston) by a narrow section of land called the Roxbury and Boston Neck (Figure 2). Until 1786, Boston was connected with Roxbury only by the Neck along which Roxbury Street ran (now Washington Street). Early Roxbury developed in the eastern corner of the town where the Burying Ground District is located. Most of the territory around the District was lowland and was once part of the tidewater marsh with streams and tidal inlets that separated Boston from Roxbury, Dorchester and Brookline. A Native American Trail passed from Boston to the Roxbury highlands and beyond across the Neck. The first roads in the town included present-day Washington, Dudley, Centre, Roxbury, and Warren streets. These early highways were let out/leased annually for pasturage.
The First Burying Ground in Roxbury (The John Eliot or Old Roxbury Burying Ground) was established on common land in 1630 and is one of the three oldest cemeteries in Boston. It was bounded on the north and east by George Alcock?s property and on the west and south by two highways ? the Roxbury Road (present-day Washington Street) and the Way to Dorchester (present-day Eustis Street). 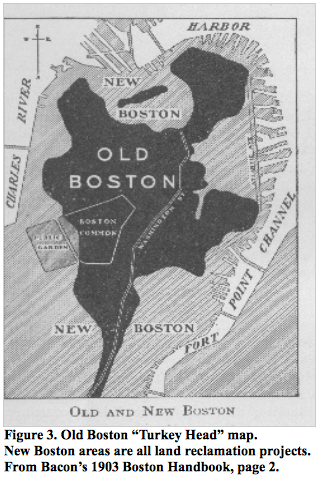 Boston and Roxbury developed in sharply different ways. Boston quickly became urban while Roxbury remained rural throughout much of its history. The first houses in both towns were of wood or waddle and daub construction with thatched roofs. By 1654, Boston had developed considerably with some masonry building among the earlier wood structures. By contrast, a 1633 account describes Roxbury as a ?fair and handsome country-town? made up, for the most part, of people who settled in Roxbury from wealthy immigrant families. The first meetinghouse was constructed in the town center around John Eliot Square in 1632 where other large houses were clustered.
Through the eighteenth-century, maps of Boston show the original land forms of Boston in the shape of a turkey head (Figure 3) with a wattle hanging down from the head and a beak sticking out to the right and a small crown of feathers on top of the head. The neck, which was long and skinny like a turkey was cut off at some point along its length. This point was the Gate and land outside the Gate was a natural causeway, soggy at high tide and spray blown in a storm. The Gate led to an actual fortified town gate which was located near what are now Washington and Dover Streets. This was the only means of approaching Boston by foot or horse. All other routes required boats.
Just outside the town gate were the gallows located in the least settled portion of the town. Francis Drake, in his history of the town of Roxbury, states that ?the Neck road was the scene of frequent robberies as it was wooded and marshy and hard to navigate. It had become so dangerous that, in 1723, it was fenced in by order of the General Court. So desolate was the Neck that even the street leading from it into town had no official name until the eighteenth century. Seventeenth and early eighteen century maps identify the road as Orange Street on the Boston side and the Roxbury Road on the Roxbury side until a visit by the President of the United States in 1789 led to its renaming to Washington Street. Buildings in this area were frequented by sportsmen and hunters looking for ducks in the ample marshes and fens (hence the name Fenway).
As a farming village, Roxbury’s economy was dependent on its crops and artisan trade, and the lowland along the Roxbury Neck was used primarily as pasturage and hay fields into the 1800’s, with some residential and commercial structures clustered along the neck road. According to the record of ?Houses and Lands in Roxbury,? there were between 70 and 80 homesteads with 90 landowners and a population of about 700 by 1654. Roxbury remained a farming town, self-sufficient in food and building materials through the 17th, 18th, and early 19th centuries until the influx of industry in the 1830s. In 1663 the town laid out 20 roads and present-day Washington was widened from the border of Boston past the Eliot Burying Ground to Dorchester.
But even as late as 1794 there were only but 18 buildings in the more than one mile between the Boston Gate and what became known as the Roxbury Gate, located at the historic border of Boston and Roxbury.
Eventually much of the Neck was rechristened the South End.
In Part 2 of ?Roxbury: Back to the future of economic?, you willlearn about the drama surrounding the Eustis Street Area during therevolutionary war and its impact on the industrialization of Roxbury resulting from the Roxbury Canal development. Stay tuned.
References:
Most of the descriptive material on the Eustis Street District including statements on the significance of the properties was excerpted from the Eustis Street Area District Study Committee Report, (1981)which according to the report, relied heavily on a report prepared by Ann Beha Associates and entitled: Boston 350: A Preservation Education Strategy. A report by Marilyn Brockman entitled: The Preservation of Buildings for Education: A Case Study in Lower Roxbury was also used heavily in the Eustis Street Area District Study Committee Report without quotation. Each of these reports, in turn, relied on research conducted by Shirley Zavin, PhD.
Additional information was obtained from the Study for the Nawn Factory Orientation Center: Historic Structure Report(1989) as prepared by Leslie Larson for then titled Division of Capital Planning and Operations for the Commonwealth of Massachusetts.
Many thanks also to others in the blogosphere who have written about the history of Roxbury, the Neck, and the Post Road. For more information on the Post Road see the following blog:
http://www.walkingthepostroad.net/Walking_the_Post_Road/Blog/Blog.html