Roxbury: Back to the future of Economic Re-development – Part 2

Posted at 13:13h in Blog by HBI Administrator
This is Part 2 in the series of blogs whereby HBI?s Jeff Morgan synthesizes the history of Roxbury Neck to help inform the direction in which new Roxbury developments may shape the future of the neighborhood. Check out Part 1 – Early Roxbury before the Revolutionary War 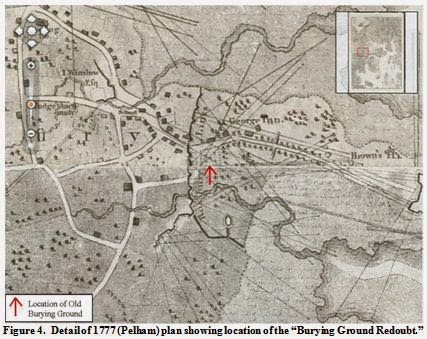 The Impact of the Revolutionary War on the Industrialization of Roxbury

Prior to the American Revolutionary War (1775?1783) Roxbury prospered. Agriculture and animal husbandry remained important to the town?s economy. Throughout the century animals were still allowed to graze in common areas. Other economic ventures included textile mills, ropewalks, a piano factory, a clock factory, lumber and stone yards, salt works, tanneries, slaughter houses, grist mills, and a chocolate mill. Following the Revolution, Roxbury Street (present day Washington Street) became a busy thoroughfare moving surplus and merchandise to and from the city.
Following the Battle of Lexington during the Siege of Boston in 1775, the American army constructed a substantial fortification called the ?Burying Ground Redoubt? across Roxbury Street (present day Washington Street) just south of the Burying Ground where the Way to Dorchester (present-day Eustis Street) began with its front nearly on the southerly line of the road (Figure 4).
The redoubt provided protection to the town from British soldiers leaving Boston. On June 17 the men of Roxbury marched to the meetinghouse and then to the burying ground. Roxbury suffered considerable damage during the Siege. Under Washington?s command a number of houses were removed along Roxbury Street. Following the Revolution remains of forts and earthworks were evident on the landscape and all buildings between the redoubt and the Boston neck had been destroyed. 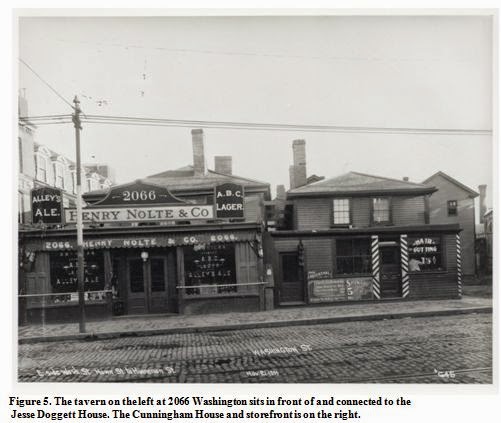 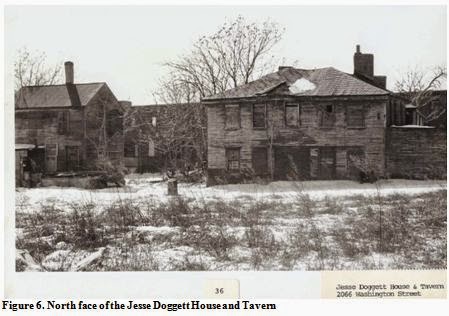 Following the disorder created by the Revolution the town witnessed renewed growth. Just north of the Eliot Burying Ground, the Josiah Cunningham House, (ca. 1784 with 1867 storefront) and Jesse Doggett House and Tavern (ca. 1788 with 1888 storefront) were built. These two houses fronted Washington Street, at 2066 and 2070 respectively (Figure 5). Oriented end to the street and separated by a five-foot passageway, the houses were placed back-to-back on the western portion of their parcel. The front elevation of the Doggett House faced north (Figure 6), and the Cunningham House faced south.
The land on which the houses stand was used for pasturage by its original owner, George Alcott, ancestor of A. Bronson and Louisa May Alcott. Horses were still grazing there when it was bought in 1784 by Josiah Cunningham, a housewright of rather modest means. The Cunningham house appears to have been built soon after that. In 1787 an identically sized plot north of the Cunningham land was acquired by Jesse Doggett, a captain of the militia and perhaps a fireman; (his will contained 2 fire buckets). The architectural similarities between the two houses suggest that the Doggett house was built by his housewright neighbor. No other known extant examples of Cunningham’s commissions have been found.
Both houses were two-story wood-frame structures with hip roofs. The houses displayed typical Federal style features such as rectangular shape, central entry bays flanked by lateral pairs of windows, narrow clapboard sheathing, and simple corner posts and cornices. Simple window framing and more elaborate door surrounds with plain classical details were common to both structures. Pairs of chimneys protrude from each back slope of the hip roofs. The Doggett House was slightly larger than the Cunningham House (27 x 38 feet vs. 20 x 40). However, as samples of the popular Federal style of the most modest and reduced sort, exhibiting basic elements of size, shape, and fenestration pattern and detail, the houses provide fine examples of artisan-class dwellings and offer an instructive contrast to the more sumptuous 18th century residences constructed by Roxbury gentry in “Roxbury Highlands” – in the vicinity of John Eliot Square.
Doggett’s building originally served as his home and was also a tavern and bowling alley known by the sign of “The Ball and Pin.” Its location on the well-travelled road between Boston and points south must have insured a steady supply of thirsty travelers, and the proprietors of the Roxbury Canal are said to have frequented the tavern regularly. The bowling alley attached to the house was a very early example of an indoor alley, for the sport was at that time more often played outdoors. Doggett was apparently an enthusiastic promoter of the game for he installed additional bowling alleys in the buildings constructed by the owners of the Roxbury Canal on the east side of the Eustis Street Firehouse. On the north side of the property Doggett also constructed a wharf which was probably connected by a smaller waterway to the Roxbury Canal.
With the growth of Boston after the Revolution, the marshland along the neck was divided and sold for development. Because of its marsh characteristics, it was not as desirable for residential use as was Roxbury Highlands and Jamaica Plain, and the area developed as a mixture of residential and industrial buildings, initially built of wood and later of brick. Textile mills, ropewalks, a piano factory, Solomon Willard’s clock company, lumber and stone yards appeared between Dudley Street and the Boston Line.
By 1797 the wasteland of the Neck was considered to be valuable property of the town. In 1789 a group of prominent local citizens formed a company to build the Roxbury Canal. They purchased large tracts of the land in the Neck. Development was proposed and begun in 1801 and by 1811 between forty and fifty acres had been developed. The development company straightened and dredged to form a canal, built wharves and warehouses along with a Canal House and retail stores. A bridge to the newly christened South Boston was opened in 1805 from the Neck at the Gate (present East Berkeley Street). The development therefore, established improved transportation for commerce by land to Boston and by water to the Boston Harbor and places beyond facilitating the industrial development and commercialization of the surrounding area between 1820 and 1830. Although development of the streets had occurred rapidly, houses did not appear as quickly. Even in the 1820s only a few houses had been constructed. 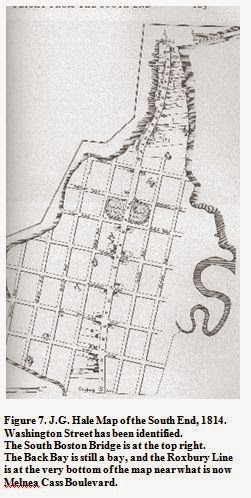 The Canal followed an old streambed along what is now Harrison Avenue, to the east of the Burying Ground (Figures 4 and 7). Mr. Doggett, who owned the Tavern and bowling alley nearby, built a wharf on the canal approximately 170 feet north of the Tavern. Evidence uncovered during 1978 and 1988 archeological excavations suggest that a branch of the Roxbury Canal did pass immediately north of the Doggett House site.
Changes in the transportation system and landfill operations, however, made the Roxbury Canal obsolete by 1820. As the centers of commerce and industry shifted away from this area, there began a gradual decline at the end of the nineteenth century.
In 1821 a road across the newly constructed Mill Dam in the Back Bay opened (present Beacon Street), and the road through the Boston Neck ceased to be the sole land route to Boston. The Back Bay was filled in and The Boston and Providence and the Boston and Worcester Railroads built tracks across the mud flats, effectively separating the South End from what became the Back Bay neighborhood. These new connections to Boston effectively left the South End as the less desirable location of the City — the proverbial ?wrong side of the tracks?.
As this area of Roxbury shifted from an agricultural to an industrial area, the Cunningham House was sold to Jesse Brown who used it for his bakery (1821). The south half of the Cunningham lot had been acquired by Luther Morse, a soap-boiler in 1815, and later sold to John Hunt, a morocco leather dresser — tanning being one of Roxbury’s major 19th-century industries. The Doggett House remained in the possession of his heirs until 1866 when it was sold to Owen Nawn, a builder who later constructed the extant brick factory on the Cunningham lands about 1880. Numerous shed and commercial structures were placed on the original land holdings during the last quarter of the 19th century, and storefronts were added to the Cunningham and Doggett houses. While the Cunningham and Doggett Houses have been demolished, their foundations remain.
In 1825 all the roads were officially named. Roxbury Street became Washington Street and the Road to Dorchester became Eustis Street. During the following decade a number of old estates near the business part of town were purchased by the town and streets were laid out through the properties. New businesses grew along these streets leading to an increase in population. By 1845, 1,668 people were employed in a number of manufacturing ventures.

In Part 3 of ?Roxbury: Back to the futureof Economic Re-development?, we bring you though the nineteenth and twentiethcentury urbanization of Roxbury and the South End. Don?t miss it.
References:
Most of the descriptive material on the Eustis Street District including statements on the significance of the properties was excerpted from the Eustis Street Area District Study Committee Report, (1981) which according to the report, relied heavily on a report prepared by Ann Beha Associates and entitled: Boston 350: A Preservation Education Strategy. A report by Marilyn Brockman entitled: The Preservation of Buildings for Education: A Case Study in Lower Roxbury was also used heavily in the Eustis Street Area District Study Committee Report without quotation. Each of these reports, in turn, relied on research conducted by Shirley Zavin, PhD.
Additional information was obtained from the Study for the Nawn Factory Orientation Center: Historic Structure Report (1989) as prepared by Leslie Larson for then titled Division of Capital Planning and Operations for the Commonwealth of Massachusetts.
Many thanks also to others in the blogosphere who have written about the history of Roxbury, the Neck, and the Post Road. For more information on the Post Road see the following blog http://www.walkingthepostroad.net/Walking_the_Post_Road/Blog/Blog.html