Selling the Stores; The Historic Precedent Behind the New Vertullo Signage

April 18, 2014 Selling the Stores; The Historic Precedent Behind the New Vertullo Signage

Posted at 16:18h in Blog by HBI Administrator

Chris Brown of b Architecture Studio is the architect that is working on the rehabilitation of the storefronts on the Vertullo Building. As a part of his research for the project, he and his team had to undertake a significant investigation of 19th century signage in order to ascertain what would be appropriate for the building. In the process they learned a great deal about the history of fonts, as well as the architectural history of storefronts. Chris kindly shared some of the information that he has gathered in this blog post. We hope that you enjoy it as much as we have. 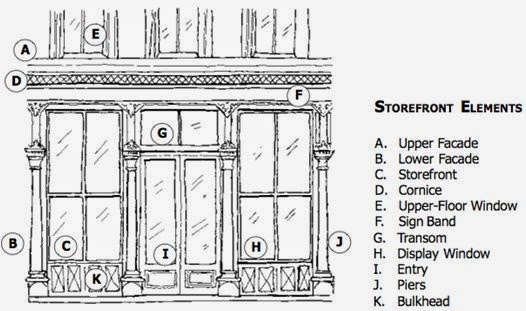 Not all early 19th century buildings had richly ornamental storefronts, still it was common for a commercial first floor to be much more ornamental than the above floors.  Buildings were often of similar heights and frequently wouldn?t have very much ornamentation above the first floor. For buildings lacking any architectural charm, it was left up to the signage to attract someone to one building over another. Typically building signage would conform to regular, reasonable spaces often above the display windows. As building ornamentation increased, signs were routinely squeezed in what small spaces remained on the building facade.  At the same time signs were no longer just being placed on the ground level; by the 1880s signs began to be fastened to the building in a variety of ways such as spanning from projecting pilasters or mounted to cantilevered brackets. Signage would often overlap windows or other building details contributing to the detriment of the building?s appearance. Eventually people began to speak out against excessive signage. The City Beautiful movement was one such group that spoke out against the negative affects that inappropriate signage has on a city.

We chose to look at a handful of 19th Century fonts which were picked because of their popularity during their time. Many have been converted to contemporary digital fonts with licenses in the public domain. Some of these fonts are even included with most word processing software. The basis for selection of these fonts also comes from Simon Garfield?s book Just My Type which compiled a list of the most influential type faces, based on various surveys of design & type professionals. Published in 2011, this book describes the origins of our digital typefaces, most of which are based on classic type designs. The fonts chosen were Modern type faces but their designs date to the 18th and 19th century. Many are still present in our everyday lives appearing on the covers of magazines or movie posters. Our second investigation included a selection of first edition plate prints from various printers before and during the 19th century. These prints were published in Stanley Morison?s book The Typographic Book in 1963 which explores five centuries of typography. Two of the mentioned printers; Firmin Didot, and John Baskerville were included in the book. Other prints include different styles of the period, such as the Elzevir Revival. Despite not making our list, they still had a large impact historically, each possessing a beauty of their own.

Today it’s most identifiable by it’s capital Q, however during it’s time Baskerville was clearly a new direction in type design. John Baskerville intended to improve on Caslon, a popular English type face with his own blend of beauty and functionality. The Baskersville font helped “bridge between Caslon’s slightly heavier ‘English Old’ face and the ‘Modern’ hairline artistry of French type founders Didot.” The font was considered “unusually slender, delicate, well balanced and tasteful” for it?s time. (Garfield 98)

Look for this font on ?high-end? fashion magazines like Elle and Vogue. The designer  Firmin Didot is credited with ?inventing the ?Modern? class of typefaces in the eighteenth century.? His font style became widely popular and is still used today. It focused more on the beauty of the letters with heavy weight contrast between thin and thick lines and long, fine serifs. (Garfield 204, 205)

A font birthed out of the English industrial revolution. It?s a slab serif font, originally published only in bold weight, with no italics.

The Century family of fonts was created in the United States in response to other, poorly legible fonts of the time. This font was designed specifically for the magazine industry, and advertisements. Still very popular today.

Not the first sans serif font but a widely popular font. This font was the grounds for what would be popularized by the Bauhaus movement and through the 1950s. Actually a large family of sans serif fonts, varying in densities, this font is most likely influenced by Walbaum or Didot typefaces with the serifs removed. Though digital typeface created by the original foundry requires licensure, many modern fonts are based on Akzidenz-Grotesk including the modern Helvetica.

This font was designed by an American Architect, Bertram Grosvenor Goodhue for the Cheltenham Press. Cheltenham wasn?t designed on a single historical model but possibly influenced by Goodhue?s involvement in the Arts & Crafts Movement. This typeface became very popular among newspapers in the early 20th century. The popularity of the font died off by the 1950s as advertisement firms moved to other styles. The font did see a comeback on the New York Time?s 2003 website, taking the form of bold headlines and earning the nickname ?The face of the New York Times.?
Conclusion
Our exploration into the commercial signage of 19th century city streets was interesting, informative and of course fun. The ability to see photos and drawings of street life was tremendously important for us to understand the possibilities for the storefronts. Window lettering, wall lettering, blade signs, and wall mounted signs were all explored. In the end Vertullo?s horizontal band on the upper facade lent itself nicely for an optimal sign placement without hiding or interrupting any of the elements on the facade. The horizontal signs work within the order of the building?s facade, and are reflective of good 19th century commercial signage.
Sources: