Posted at 11:56h in Blog by HBI Administrator

When you ask an expert to explain New Markets Tax Credits, expect that you might leave more confused than you were before you asked. New Markets Tax Credits (NMTC) are notoriously complicated and just examining this chart below, which depicts the movement of the funds from one entity to another, may bring on a headache.

So we asked Kathy McGilvray, an investment officer at the Massachusetts Housing Investment Corporation (MHIC), to try and give us a simple explanation of the New Market Tax Credits in the context of the Eustis Street Fire House. We hope that Kathy’s thoughtful and clear answers might help others understand how these tax credits are vital in moving along a complicated rehabilitation project, and how they might work hand-in-hand with historic tax credits. 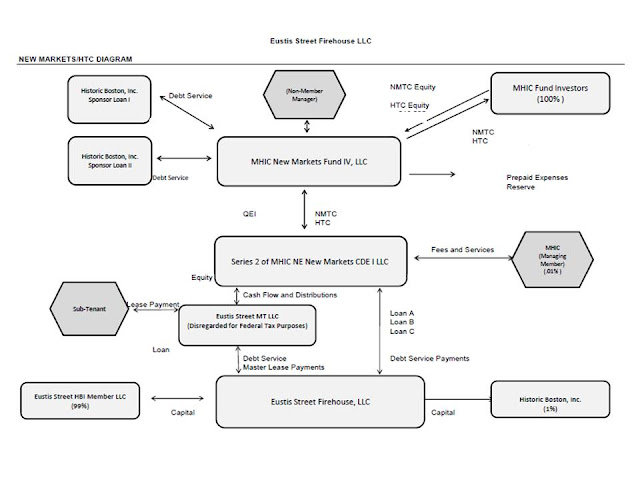 What is the New Markets Tax Credit Program and how does it work?

The New Markets Tax Credit (NMTC) Program was authorized by Congress in December 2000. It permits taxpayers to receive a credit against Federal income taxes for making qualified equity investments (QEIs) in designated Community Development Entities (CDEs). The qualified equity investment must in turn be used by the CDE to provide investments in low-income communities. The credit provided to the investor totals 39 percent of the cost of the investment and is claimed over a seven-year credit allowance period.

?What attracted MHIC to HBI and the Eustis Street Fire House project?

MHIC specializes in financing projects that cannot be financed by traditional sources ? the Eustis Street Fire House project certainly fits that description. Efforts to rehabilitate the building had been stalled for decades. The project?s location at the gateway to Dudley Square ? where MHIC has invested substantial capital in both community development and affordable housing projects over its 20 year history ? also fits perfectly with MHIC?s mission. The Fire House?s preservation will contribute to the continued economic development and revitalization occurring in the Square and will lead to preservation of the Eustis Street Architectural Conservation District. Finally, the relocation of HBI?s headquarters from downtown to Dudley Square not only brings jobs from downtown to Dudley, but also supports HBI’s ?Historic Neighborhood Centers? mission to apply the tools of preservation and real estate development to multiple sites in neighborhood business districts to demonstrate the role preservation-based development can play in economic development and neighborhood identity.
?

How large is MHIC?s NMTC allocation?

Each year, CDE?s apply to the Community Development Financial Institutions Fund (CDFI), a division of the Treasury, for an allocation of NMTC authority. MHIC has applied in each of the 8 competitive award rounds to date and has been awarded an allocation in 7 of the 8 rounds. MHIC?s total allocation award over the 7 rounds is $517,000,000.

How many projects has MHIC financed?

MHIC has financed 47 projects; 41 in Massachusetts, 2 in VT, 2 in CT, and one each in NH and RI. Projects range from mixed use real estate to community facilities to business expansion projects.

What is the benefit to investors in your New Markets funds?

NMTC investor?s return is typically based solely on the tax benefit generated by the New Market Tax Credit offsetting the investor?s tax liability.

Due to the high costs of rehabilitating historic buildings, the historic rehabilitation tax credit (HTC) alone often does not provide enough gap-filling equity to balance the development budget. By combining the NMTC with the Federal and state HTC, the proceeds of the sale of the HTC can be further leveraged to generate NMTC equity. For example, the proceeds from the sale of the state and federal HTC generated just over $422,000 in gap filling financing for the Eustis Street project. However, that still left the project over $500,000 short of a balanced budget. That gap was filled with equity generated from the sale of the NMTC.

What is the Massachusetts Housing Investment Corporation, what does it do, and how large is its staff?

Massachusetts Housing Investment Corporation is a private, nonprofit lender and investor specializing in financing affordable housing and community development. It was founded in 1990 by a consortium of banks and other corporate investors to fill a critical gap in meeting the credit needs of developers who could not get financing for certain projects from traditional lenders. To date, MHIC has provided more than $1.3 billion to finance affordable housing and community development. Under its New Markets financing program, MHIC has provided more than $400 million to finance a range of community development projects in Massachusetts, Vermont, Rhode Island, New Hampshire and Connecticut. MHIC has 28 staff members.