Posted at 16:03h in Blog by HBI Administrator 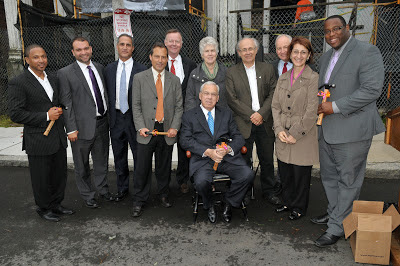 On June 18th HBI celebrated the long awaited start of construction at the 1836 Alvah Kittredge House in Roxbury.  A crowd of more than 75 friends and neighbors braved the evening?s rainy weather and enjoyed a barbeque, tours of the Kittredge House and good company on Linwood Street and in the adjacent Kittredge Park.

Reverend Evan Hines of Eliot Congregational Church led off a speaking program that included Mayor Thomas M. Menino and HBI President Matthew Kiefer.  With the Kittredge House as backdrop, Mayor Menino recalled the long road to HBI?s $3.8 million restoration.  Vacant for twenty years and falling further and further into disrepair, the Kittredge House will be restored to its Greek Revival period grandeur, and transformed into five two-bedroom apartments, two of which will be designated affordable units.

The Mayor celebrated the preservation of ?an architectural treasure,? and commended HBI for reaching this important milestone, calling the project ?an investment in Highland Park, and an investment in the City of Boston.?
Geoffrey Caraboolad, CEO of Metric Construction Corporation was acknowledged for his significant financial contribution to the Kittredge House project. The Highland Park neighborhood was congratulated for its advocacy and enthusiasm for preservation, and the many donors to the Trilogy Fund for Historic Boston ? the capital campaign that has made the Hayden Building and the Kittredge House possible ? were thanked for their generosity.
Regardless of the clouds that loomed that evening, the sun was definitely shining on Linwood Street.  Stay tuned here and click Follow by Email for construction updates and news about the Kittredge House?s progress.