The Art of the Hayden Building

Posted at 15:58h in Blog by HBI Administrator 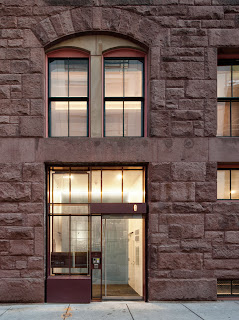 With the rehabilitation and adaptive reuse of H. H. Richardson?s Hayden Building now complete, Chris Johns, Partner at CUBE design+ research, would like to share more on how their research informed elements of project design and inspired CUBE?s art and interpretive installations throughout the building?s public spaces.

CUBE set out with the premise that not only were we rehabilitating this historically significant structure but we were also preserving the ideas and time periods that shaped it.  We began the project with extensive research on the evolution of the neighborhood over the last 140 years and even traced the building’s commercial occupants as seen here.
The character of a place is established by the people that inhabit it regardless of the building, which for the Hayden Building shifted radically. Because the neighborhood centered on the production of textiles during the end of the 19th century, its occupants were mostly clothing and hat shops. After a mixture of businesses during the 20th century, the Hayden Building became a focal point of adult entertainment in the 1960?s as the neighborhood turned into the Combat Zone, Boston?s red-light district.On the edge of Chinatown and the Theater district, this Nationally Registered Historic Landmark was gutted by fire in 1985 and remained vacant until its reuse today. 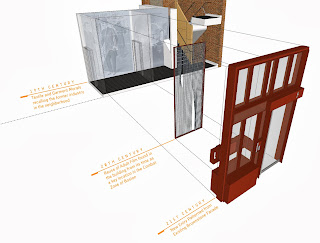 We endeavored to create a symbiotic relationship between new and old, telling the visual story of past and present at the same time.  Contrasting old worn elements with layers of new refined elements heightens the awareness of both.  It is in these relationships that emerges the richness of place and understanding of time.  HBI afforded us the opportunity to visually tell this social history of the Hayden Building within its common spaces combining traces of history with modern living.

The Hayden Building defines the beginning of Richardson?s exploration of how to articulate larger commercial buildings with the advancement of engineering and new building materials at the turn of the 20th century. At a time when architects were trying to make buildings appear more residential in size, Richardson embraced the massive scale with oversized stone coursing and grouped window openings in repetitive bays.  The Hayden Building was Richardson?s testing ground for the ideas of solid (massive stone fa?ade) and void (large grouped windows) prior to his widely known Marshall Field Building in Chicago which became a template for early skyscraper designs.
The entry off LaGrange Street reopens an original secondary entrance and creates a new lobby and access to the staircase for residential tenants. As residents enter the building they pass through a layered sequence of spaces and fenestration, each one representative of a different historical time period.
The first layer, a new custom storefront, inverts Richardson?s solid and void concept by inserting new steel plate window muntins in line with the existing mortar joints between the massive brownstones.  This composition visually ties the lines of the new and old, except now the mortar joint lines frame glass instead of stone.  Solid steel boxes fill out the remaining portions of the storefront and are programmed with the street address number, necessary utilities and mailboxes. 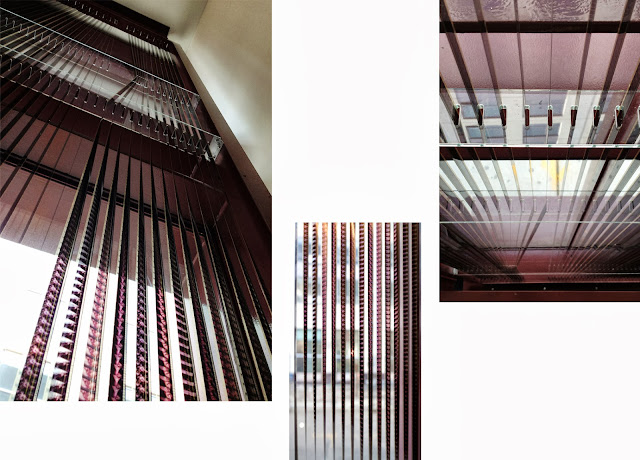 The second layer is displayed immediately behind the storefront glass left of the entry door in a steel frame.  Woven into the frame is a portion of one of the 16mm adult films found in the building from the Combat Zone?s heyday.  The film screen obscures the view of passersby reminiscent of the privacy curtains privacy found at old peep shows. 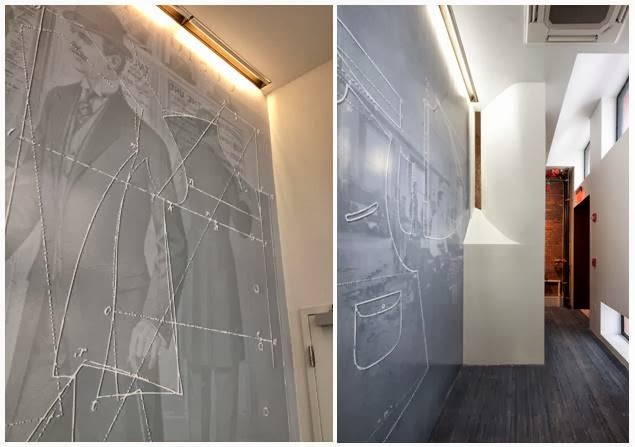 As the backdrop to the lobby, the third layer is a floor-to-ceiling mural composed of an oversized view into an 1890?s clothing and hat shop layered with the frock overcoat ?Paletot? tailor pattern.  This mural extends beyond the lobby into the next space with more imagery and patterns from the 19th century.  Proceeding through a series of small and large spaces,residents find the stairway where their mindset shifts from street life to home life.
Stairway 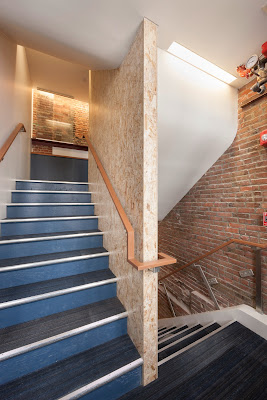 Since the 5-story building has no elevator, climbing the stairway was designed to be a thoughtful and didactic experience.  Transitioning back and forth between the apartment entry stoops and the historic depository wall, the experience shifts the viewer from being on display in the large windows along the fa?ade to a more intimate space for observing the info-graphic art panel layered overthe existing brick walls.
Each panel is designed around a specific historical period or topic with layered images, drawings and text we discovered through our research.  The didactic art pieces enliven the staircase and provide insight into the building?s storied past including the neighborhood, its occupants and the architect.  Each panel is positioned to be visible from below to draw you up the staircase.
Panel between floors 1 and 2: Combat Zone (1963-1985)
This panel layers images of the 1960?s streetscape with a ground floor plan of the former peep show parlor along with instructions in case police or fire officials show up.
Panel between floors 2 and 3: Hayden Building (1875-1904)
A photograph taken just after a pharmacy exploded on the site upon which the Hayden Building was later built, covers this entire panel along with an early 20th century map.  The void left from the exploded building is infilled with a ghost of the Hayden Building.  The entire panel is black and white with the Hayden ghost rendered with color reading through from its actual brick wall from behind.

Panel between floors 3 and 4: Building Occupants (1875-2010)
Layering various advertisements and newspaper clippings, this panel chronologically lists all of the former building occupants.  For example, an advertisement from the ground floor Dental Parlor around 1900 reads ?whether you have any work done or not, we extract teeth free of charge, no pain, no gas or cocaine.?
Panel between floors 4 and 5: H.H. Richardson (1838-1886)
This panel honors Richardson and his contributions to architectural design and the Hayden Building.  It features the original building permit found during our research along with a stoic image of Richardson himself.  Built by the Norcross Brothers, the Hayden Building was constructed during the same time as Trinity Church in Copley Square, also designed by Richardson.  Brownstone extracted from quarries in Longmeadow, MA was used on both buildings.

We learned that thorough research combined with inventive architecture and graphics can enrich the identity of a place. The layering of historic information in new ways brings about a unique understanding of the past while preserving those ideas and stories for future generations to learn from and enjoy.