The Kittredge house in the 20th Century

Posted at 13:57h in Blog by HBI Administrator 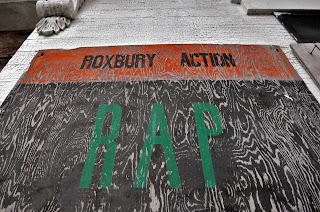 We are pleased to present the second installment of Kittredge architect, David Amory’s blog post on the history of the Alvah Kittredge House. This post highlights the life of the house from the 1890’s to the present.

Roxbury Action Program
With continued development in Roxbury, rising real estate values in the 1890s led to the sale of the Alvah Kittredge House property and the relocation of the house. Bradlee?s wings were removed, the landscape gardens erased, and the main building – with its colossal portico intact ?lifted, rotated, and squeezed down next to Linwood Street between new row houses where it stands today.
In 1969 RAP purchased AKH as the headquarters for its mission to build a model black community and pick up the pace of Roxbury?s community development. As reported by the Center for Community Economic Development (1978), AKH became RAP?s center of revitalization for the house and, more so, the neighborhood. RAP?s mural, ?Modeling a Black Community? by artist James Reuben Reed, a collage of Highland Park with images of community activists, a freshly painted AKH cheek-by-jowl with boarded-up row houses, and a bright green park, filled one wall of the AKH stair hall; it was recently removed and relocated to Roxbury?s National Center for Afro-American Artists.
Historic Boston Inc.
As architects, we took our first swing at ideas for redeveloping AKH with HBI in 2007, having admired the building since working on the rehabilitation of the Alvah Kittredge Row Houses in 2000. Seven years later new construction is well underway, and a new vision emerging from the dense old bones of our resilient Grande Dame. HBI is transforming the 177-year-old AKH back to its original use as a home, this time as ?mixed-rate? apartments. While preservation goals for the building exterior and portions of the interior are high priority (and not only for project funding), our real challenge is to make beautiful comfortable living space for five families in what was once a single-family mansion. We are working closely with HBI and Metric Construction to deftly integrate necessary 21st century amenities like up-to-date kitchens, bathrooms, heating and cooling, lighting, and fire protection, while restoring significant architectural features such as Asher Benjamin?s favorite two-story-tall?colossal? Ionic portico columns and corner pilasters and the interior curved stairway. When we are finished we will have introduced new elements that recall (not reproduce) original architectural elements like the portico steps that once extended the full width of the fa?ade, that make the building energy efficient and let the house speak for itself.
Power of the Portico
Despite uprooting and neglect, the Alvah Kittredge House – a simple two-story block with giant, friendly porch columns, generous windows, octagonal rooftop cupola, and fine detailing ? is a survivor. Preserving and reinventing this Roxbury icon affirms our commitment to community, and reconnects us to generations of those who have dwelled within, and to generations of those who will.