Posted at 16:33h in Blog by HBI Administrator
While Alvah Kittredge?s name is connected to a house, a park, and a set of rowhouses in Roxbury, not much is known about him or his mansion at 10 Linwood Street. HBI, as the new owner of the Kittredge house, needs to better understand the building and its occupants in order to carry out well-informed preservation work there, and the best way to do that his through extensive research on the history and evolution of the house. Primary resources, such as insurance maps, city directories and building permits, provide a majority of the information about individual buildings and their owners. Photographs are possibly the most valuable resource and are sometimes the most difficult to find, as is the case for the Alvah Kittredge house.

Historic maps of Roxbury offer insights into the house?s numerous phases of alteration. Noted Boston architect Nathaniel Bradlee purchased the house in 1871 and made several changes to the wings on the south side, as you can see on the maps below. 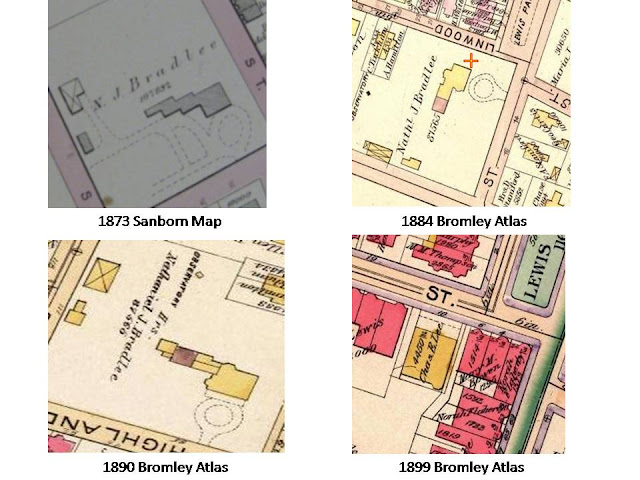 The Boston City Directories revealed that Alvah Kittredge owned a furniture store called Kittredge & Blakes in Scollay Square. This was a big step in better understanding who Alvah was and how he was able to build such a large mansion in Roxbury. An advertisement in the 1848-1849 Directory lists the various products that were sold at Blake and Kittredge, including looking glasses, Chinese teapots, and upholstery.

By looking at building permits, we were also able to follow some of the changes that have been made the house. It is important to keep in mind that not every alteration is documented with a permit. The first known permit is from 1919, showing that owner Mrs. J. Brown repaired the piazza and put in a new sill. A majority of the permits are from the 1970s, when Roxbury Action Program (RAP) purchased the house, then vacant, for use as its headquarters. RAP repaired the front and rear porches as well as patched the ceiling, replaced windows, and installed new gutters, among other things.

Through title research, we were able to track the subdivision of the estate as the area grew in density during the late 19th and early 20th century. It was also discovered that the house was auctioned for $500 in 1939 after the owner, Elizabeth Brown, passed away. Death records shows us when (and sometimes how) people associated with the building died, like Alvah Kittredge below.
?

? Our research is steered by questions and we still have a lot of unanswered questions about the house and its owners. We continue to search for additional historic photographs of the house. By looking at old photographs of Roxbury as well as the Kittredge and Bradlee families, we may be able to uncover more images of the house in its original position on Highland Street. We hope to find architectural plans for house from when Nathaniel Bradlee made alterations, though we are not sure they exist. It is still uncertain if the house was moved in 1896 or 1898. Additional title research will likely answer this question. Finally, we would like to know more about the people who owned the Kittredge House in the years between Bradlee, who left in the 1890s, and Roxbury Action Program, which purchased the house in the 1970s. If anyone has any information about the people who lived there in those years, please let us know in the comments, or email Lisa Lewis at lisa@historicboston.org.

For more information about researching historic buildings in Boston, see the Boston Preservation Alliance?s guide, which describes where to find and how to use many of the sources listed above.

The author of this post, Kate Gehlke, is finishing up a graduate degree in Preservation Studies at Boston University. Kate is originally from Columbus, Ohio, and is enjoying living in Boston and has become a rabid Red Sox fan. She is particularly interested in preserving historic multi-family housing in greater Boston.