Two Views from the Scaffolds of the Hayden Building

October 2, 2012 Two Views from the Scaffolds of the Hayden Building

Posted at 16:17h in Blog by HBI Administrator
HBI is in the midst of rehabilitating the H.H. Richardson?s landmark Hayden Building into four residential apartments and one ground floor retail space.   Our architect is CUBE design + research and our contractor is Marc Truant & Associates.   HBI asked team members Chris Johns of CUBE and Pam Bailey of Truant to talk about some of the challenges of converting an existing, historic building into a contemporary use.  Here?s what they had to say.
Pam Bailey:
There are many tools needed to complete a successful project – a lot of skills and insight to bring 21st century technology into centuries old buildings.  There are a lot of problems inherent with overlaying a current design and vision onto a structure created with entirely different intent.  In my mind, the most important tool is teamwork and respect.  In the case of the Hayden Building, the team is made up of HBI, CUBE, and Marc Truant & Associates.  But the central team doesn?t end there; H.H. Richardson and the Norcross Brothers (original contractor) are active participants in the project. Devastated by fire and left open and abandoned for years, the environment has become one more architect with a hand in shaping the building?s development. They all have a voice in our current restoration of The Hayden Building. 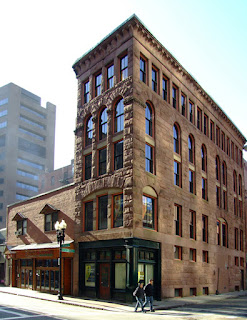 The partnership between the original team and the current team takes center stage during planning and construction. Lifting the well thought-out and detailed design for these high-end dwelling units from the plans and installing them into the 137 year old bricks and mortar structure poses many challenges.
When everything is stripped down we fully discovered the quirks of the building.  Hayden is not a rectangle; her walls are not at 90 degree to each other by design, and they are greatly out of plane due to circumstance.  The ceiling heights on each floor vary.  On the third floor we have close to 2? between joists and finished ceiling to run mechanical equipment, ductwork, piping and power.  On the fourth floor we have 9 ?? depth for the same materials; the heat pumps themselves are 9?.  The coordination and layout of these zero-tolerance spaces were crucial.  The building was built for commercial use; incorporating storage into the units is equally challenging for both Architect and Contractor. CUBE?s artful and practical solution of built-in cabinetry works with the rhythm of the windows and they feel the massing of the millwork echoes Richardson?s interiors.  Translating these sleek lines, tight reveals and massing within walls not square and windows out of plumb also requires weaving together the partnership between the architects and builders.
Every day we team up with H.H. Richardson, Norcross Brothers , HBI and CUBE.  As the General Contractor?s Project Manager, I feel honored and awed to be working side by side with team.  Washington Street?s remarkable transformation is anchored at each end by the Ames Building, called Boston?s first skyscraper, and at The Hayden Building, attributed to be the prototype for modern high rise building. This gem of a building is being polished into the diamond of the Washington Street development corridor.
Chris Johns:
CUBE design and research has had the great privilege of working with Historic Boston Inc. and the general contractor Marc Truant and Associates on the transformation of the Hayden Building originally designed by Henry Hobson Richardson (1875), his only remaining commercial building in Boston.
Working on a building that is nearly 140 years old can be a bit like surgery.  Different efforts of work are occurring at the interior and exterior, all while carefully maintaining as much of the original building as possible.  The anatomical process of incisions, dissections, insertions and the peeling away of layers have to be carefully choreographed to bring a greater understanding of the historical significance of the building while also accommodating unforeseen discoveries made during construction.
It is important not to compete with the existing building but to acknowledge and compliment its essence. To appropriately highlight Richardson?s design intentions and significant aspects of the Hayden Building, we needed to understand the architect and his Chinatown gem.  We learned Richardson was no theorist, but by visiting his buildings we began to understand his design intentions.  Through many daunting excursions inside the filthy walls and onto the rickety floors of the Hayden Building we discovered that nothing was straight, square, or plumb.
These initial experiences along with the ideas and data discovered in historical research directly influenced our design approach and the architectural expression.  It is important that our interventions are historically referential to bring awareness to the ideas that shaped the building and its significant aspects and also that flexibility is built into design concepts, layouts and detailing to accommodate the wear and tear that time has taken on the building.  New and old must have a symbiotic relationship, telling the visual story of past and present at the same time.  It is in these relationships that emerges the richness of place and understanding of time.
Thickened Edge

In much of Richardson?s residential work, his use of elements such as fireplaces, book shelves, benches and screens softened the transition between spaces but also provided another layer of activity to the edge of the space.
From the exterior, one can see the massiveness of the brownstone fa?ade in contrast to the window openings.
Now the occupant can experience this from the inside.  By relocating the bedrooms away from the exterior wall and adding storage elements that support daily activities between the windows, we were able to heighten one?s awareness of the contrast between the massive brownstone exterior and the delicate transparent openings that articulate it.
Datum

Richardson?s use of wainscoting was critical to articulating spaces.  Detailed paneling creates a horizontal datum relating to the human scale and the interruption of windows brings the outdoors inside.
Similarly, the window walls of the Hayden units are wrapped with crafted materials to express hierarchy in the windows and to reveal critical construction details such as the brick pockets which were used as scaffolding footholds when the masonry walls were originally constructed.
Discoveries 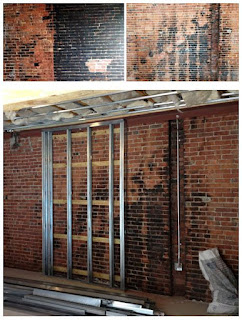 Hayden suffered a huge fire in 1985 that burned out the upper floors and roof completely. While cleaning the interior brick some areas proved more than stubborn. The images above show how fire has scarred the brick.  Clearly a material that burned at a very high temperature was affixed to the wall in the left image.  On the right image, the outline of a staircase and vertical furring can be seen imprinted on the brick.  We believe here on the fourth floor is where the fire started and traveled up the small chase in the wall.
A wall panel and electrical conduit within the bedrooms frame and highlight these discoveries.
We are now working on abstract installations that will recall past occupants of the building including textile reliefs, info-graphic panels in the staircase and a screen at the entry made from the adult films that were left behind.
CUBE is blessed to have this opportunity of working with this team on such a pivotal project for Historic Boston Inc.  We feel a great responsibility to share what we continue to learn about Richardson and his Hayden Building.  We are not only rehabilitating this long-time vacant structure but we are also preserving the ideas and the storied past that have shaped it. 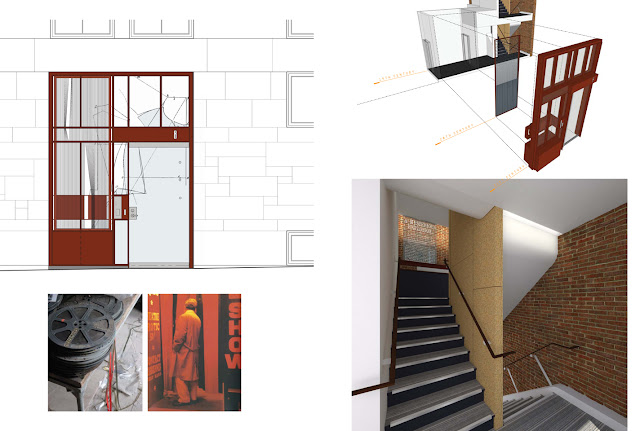