December 20, 2014 UMass Boston archaeologists look below the surface at the oldest farmsteads in Mattapan and Iceland

Posted at 08:57h in Blog by HBI Administrator 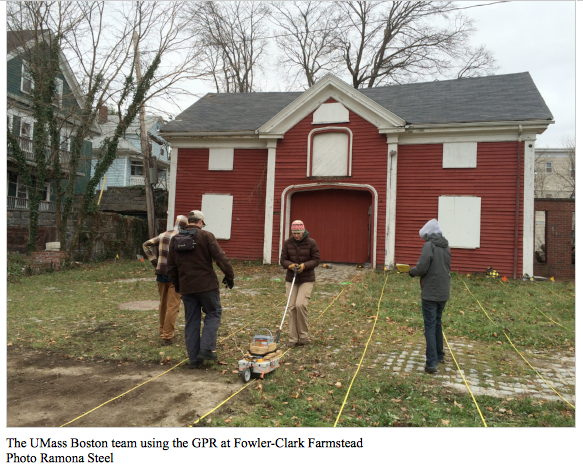 The Fiske Center for Archeological Research at UMass Boston is performing a geophysical survey to identify any hidden and buried archaeological remains on the Fowler-Clark farmstead in Mattapan, potentially the oldest surviving farmstead in Boston. Our guest blogger is Dr. John Steinberg, who is leading the survey team.
Historic Boston Inc. commissioned the Mattapan geophysical survey as part of their vision to restore the two historic structures and maintain the pastoral setting of the Fowler-Clark farm. Today the 200-year-old farmstead sits on half an acre at Hosmer and Norfolk streets. It is not known exactly when the main farmhouse was built, but it appears on maps drawn between 1786 & 1806. The current stable dates from 1860, but there were potentially earlier versions. The UMass Boston team is hoping to find evidence of earlier stables and other outbuildings. We are using both ground penetrating radar and conductivity to attempt to identify any preserved deposits from the earlier phases of the farm, helping Historic Boston plan for preservation of the property. 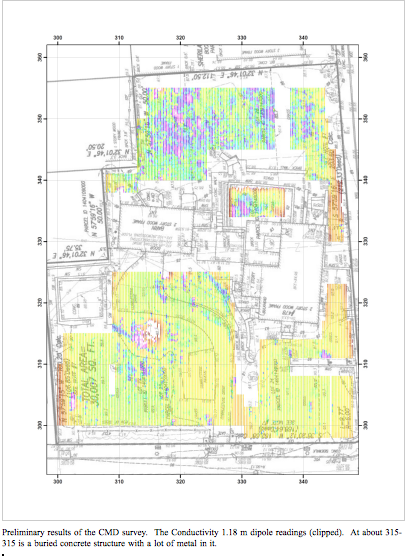 Starting next summer, the same equipment and techniques will be used by the UMass Boston team to find the earliest farmsteads of the Viking Age in northern Iceland, just 60 miles south of the artic circle. The work is part of a 3-year project funded by the US National Science Foundation to investigate the initial colonization of the remote North Atlantic island over a millennia ago. The Viking Age farmsteads were established by Norse immigrants coming to the uninhabited island as part of the Viking expansion across the North Atlantic, which eventually led to the colonization of Greenland and the brief settlement of North America at L’anse aux meadows in Newfoundland, Canada.
The UMass Boston team has been working in northern Iceland since 2001, trying to understand how rapidly this misnamed?and relatively warm?island was settled. The UMass Boston team, along with their Icelandic colleagues, will use the same geophysical survey methods (conductivity and ground penetrating radar) to look beneath the deep volcanic soil to identify the Viking Age farmsteads and associated cemeteries. The goal of the Icelandic research is to try and understand how Viking Age settlement changed with the introduction of Christianity in 1000 AD.
The UMass Boston projects in Mattapan and Iceland are examples of how international research funded by the Federal Government has tangible local benefits. To read more about our work in Iceland, see:
http://www.boston.com/news/science/articles/2007/12/03/he_digs_less_to_learn_more_about_vikings/
and:
http://www.smithsonianmag.com/history/the-vikings-a-memorable-visit-to-america-98090935/?no-ist