Underneath it all: A Diamond in the Rough at 65 Pleasant Street

Posted at 17:57h in Blog by HBI Administrator

One of our board members (who shall remain nameless) thinks that the Anna Clapp Harris Smith house is ?terribly ugly.? While we disagree, we admit that, when we first came across the house, its appearance left something to be desired.

The Clapp House lost a lot of character in the 20th century: the exterior was covered in non-descript brown shingles; the windows were replaced with smaller 20th century aluminum framed windows; a Victorian period porch was installed that subsequently fell down; and the shutters, which once protected great historic windows, disappeared. While we knew this was a restoration waiting to happen, it wasn?t always easy to convince people that it was a treasure worth spending money on.

That all changed this month. Why? One word: Windows!

Here, take a look for yourself.

The team of HBI and North Bennet Street School spent the last year removing the shingles to reveal original clapboards, rebuilding federal period chimneys and foundations, and installing a Federal period door. But it wasn?t until the preservation carpentry students installed new handcrafted period windows last week, with the 12 over 12 lights, that the Clapp House really started to turn heads in Dorchester.

You may ask, why? That?s harder to describe. Buildings change over time as people make repairs or adjustments to modernize. The 20th century windows may have been easier to clean and retained heat better, but they changed the overall look of the house because they were smaller and had only two panes ? top and bottom. The new windows restore the ratio of window openings to building face and presents more of the original features characteristic of architecture of this period in Boston.

We like to call the Anna Clapp Harris Smith House a ?scrapbook? house, one whose architectural changes and decoration express the many generations of uses and tastes of the people who lived there. When HBI plans a preservation project, we assess those physical changes in order to make critical aesthetic and historical choices in our bricks and mortar work based on periods of significance and, frankly, cost. At the Clapp House, we hired architectural historian Sara Chase to help us inventory those changes and determine what should stay and what should go. One Victorian porch will stay with its door; the other has been replaced with a colonial period door. Aluminum framed windows were an inexpensive and insensitive addition; their replacements make visual sense. Today?s asphalt roof was probably wood shingle, followed by slate. Neither is cost effective. We will be replacing it with more asphalt. 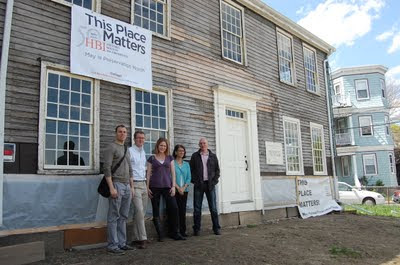 To learn more about how the newly installed windows were built, see the excellent guide written by North Bennet Street School student Bill Rainford for our blog back in January. Since that time, the students at the school have been busy sourcing reclaimed historic glass that is period appropriate for the 12×12 windows panes. It was all custom cut for the new windows by NBSS students from other recovered or abandoned window sash around the region.

Perhaps the moral of this story is to not judge a book by its cover. Remember that board member who dismissed the house as ?ugly?? Upon seeing the most photographs of the house after the installation of the new windows, she asked ?Is this the same house?? Success!

Look around: is there an architectural gem beneath layers of vinyl siding, stucco coatings, and aluminum replacement windows somewhere near you?