Urban Farming and Historic Preservation: A Return to Mattapan?s Roots

Posted at 11:21h in Blog by HBI Administrator

In a city as historically rich – and old, as Boston, why is it that we often overlook the stories of so many in favor of a polished history of so few?
As we all too often experience, certain communities are underrepresented in city-wide historical and cultural spheres, which in turn skews the portrayal of Boston?s deep and diverse identity. The preconceived notion that if you have traveled along the Freedom Trail and visited other well-preserved sites in more affluent neighborhoods you?ve somehow experienced ?historic Boston? for all it is worth is a disservice to the communities that are excluded from these rather arbitrary boundaries.
And so cue HBI?s latest prospective project: the rehabilitation of the 1786Fowler-Clark farmhouse and 19th century barn. The farm is very much emblematic of an earlier era in Dorchester?s history: one of open pastures and sprawling farmland rather than the residential streets lined with triple-deckers that have come to characterize the urbanized area today. The farm offers unique insight into Mattapan?s agrarian past, often overshadowed by disinvestment and social challenges that have come to characterize the neighborhood in media and other platforms today.

From a preservation standpoint, the rehabilitation of the Fowler-Clark farm as one of the oldest and most intact structures of its kind is remarkable in and of itself, especially considering the resiliency of the house and land to withstand decades of residential development (and perhaps the previous owner, Jorge Epstein who purchased the house in 1941, can be thanked for his personal interest in preservation which protected many of the historic features of the house). Today, the original house and barn are situated on a plot of land a little over a half acre in size ? which, though greatly diminished from the original 330 acres, is unique within a highly developed ?street-car suburb? such as Mattapan. But, what makes the project truly extraordinary is the proposed use of the land and buildings as an urban farming site. With this interesting twist of fate, the very profession that supported Samuel Fowler over 200 years ago will save the distressed property for years to come, creating new jobs and a space for farmer training programs in the process. The near seamless coupling of the old and new tackles some of Mattapan?s most daunting contemporary challenges, such as economic disinvestment and food insecurity, while tapping into the unique history of the neighborhood for creative solutions. 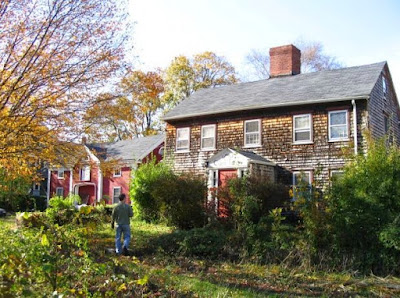 Just as the old farmhouse and barn will be rehabilitated to function within the 21stcentury, the land will endure a similar transformation as agriculture returns to the site. The growing momentum in support of the production and distribution of local produce, especially in urban centers, drives a very different type of agriculture than what is utilized in rural areas. So in this way, the Fowler-Clark farm has the potential to become a mecca of innovation and experimentation for the growing urban agriculture movement in the Greater Boston area. But by preserving the authentic purpose of the property and allowing farmers to till the land once again, other less quantifiable assets will emerge as people begin to recognize the future role of the farm. It is these intangible components of culture and activity and community engagement that have the power to humanize buildings that have long lost their connection to the community. As farmers return to the site, visitors and locals alike can celebrate in the shared cultural significance of the property, while simultaneously building a sense of pride and identity rooted in the past.
We all know Boston?s historical rep – its streets are teeming with history. It radiates from the buildings and cobblestone alleys of Beacon Hill; it infuses authenticity into the restaurants dotting the North End; it enlivens the historic downtown center with old buildings scattered amongst the new. But perhaps it?s time to expand our ?traditional? understanding of Boston?s history to areas beyond the boundaries of the Freedom Trail. The restoration of the Fowler-Clark farm does just that, as a return to Mattapan?s historic agrarian roots offers another way of interpreting Boston?s history by cultivating a deeper sense of place and identity that allBostonians can celebrate.